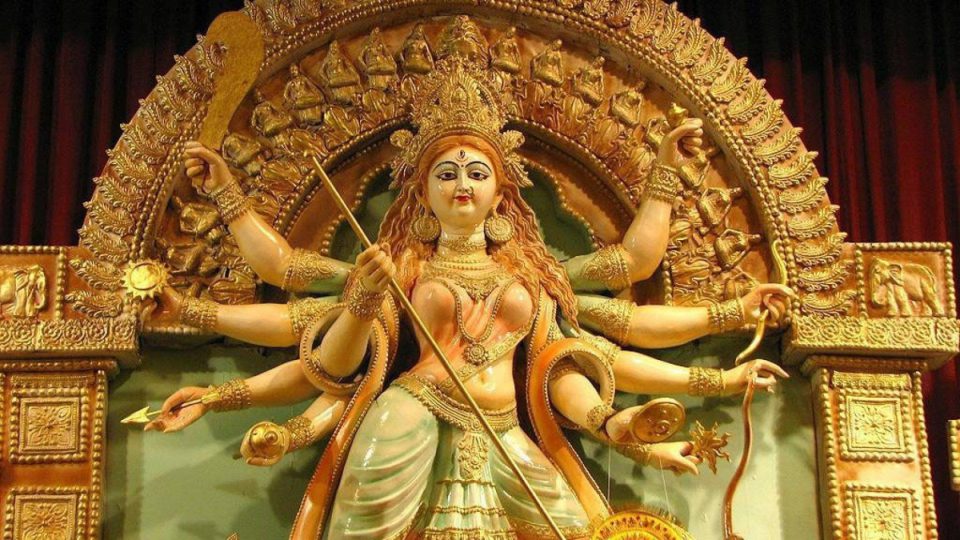 While preparing for the Durga Puja celebrations in Kolkata, you should be mindful that lengthy queues next to the pandals may be seen every evening starting from Shashti and continuing till Navami. You may, however, escape the crowds by visiting the pandals during the day. Kolkata’s Durga Puja is absolutely incomparable. In Kolkata, there are a number of well-known Durga Puja locations. North Kolkata’s puja pandals are more traditional, whilst those in South Kolkata are more contemporary and eye-catching. Read below to find some of the famous Durga Puja in Kolkata you must visit at least once in your lifetime.

Bagbazar Durga puja is one of Kolkata’s oldest pujas, dating back over a century. The Bagbazar Durga puja remains busy throughout the puja days, and the Durga idol is even more famous. Besides the eye-catching idols and pandals, the ground’s amusement rides and booths add to the enjoyment. Married ladies undertake a highly unique ceremony, Sindoor Khela, on the last day of Durga puja, Dashami. On this particular day, people from all over the city flock to the pandal to watch the ceremony.

Another famous Durga Puja in Kolkata is Maniktala Chattabganj Lohapati Durgapuja that was established in 1943. Chaltabagan club President Lucky Moon Jaiswal established this Barwari Puja (87 years old). Per year, the club constructs a spectacular puja mandap based on a different theme. Aside from religion, the group has run health camps for several years. They also assist the needy by giving food, clothing, and other necessities. They gave 50,000 to disaster assistance for Cyclone Aila victims in 2009, and 100,000 to the Governor of West Bengal’s relief fund in 2010.

MD ALI PARK, Youth Association Puja is another name for Durga Puja. This is one of famous Durga Puja in North Kolkata opened in 1969 at 39 Tara Chand Dutta Street. The Famous Fire Brigade Puja was closed in 1968, prompting the creation of this puja. Blood donation, complimentary donation of clothing to the underprivileged, free books to underprivileged kids, Daridra Narayan Bhojan, and other humanitarian initiatives were arranged by the puja committee.

One of the famous Durga Puja in Kolkata was celebrated in 1934 by a group of passionate young people in 1934. This Puja Committee chose to apply the “theme worship” approach around eight years ago. They ultimately realised their ambitions after overcoming several hurdles, and in the years that followed, they received numerous honours for their work. In addition, as part of its social duty, this organisation hosts blood donation and health screening camps each year. Local people’s support is constantly extended by the members of the Nabin Palace.

Hindustan Park Durga Puja is one of the famous Durga Puja in Kolkata and the oldest in South Kolkata, alongside Triangular Park. Other events organised by the group include tree planting, delivering meals to the poor, a blood donation camp, a medical assistance camp, and other community programs. The lights, large pandal, idol, and stunning décor make this Durga Puja the finest.

This year, the Ekdalia Evergreen club will hold its 79th Durga puja under the presidentship of Subrata Mukherjee. Ekdalia has ties to a variety of social and humanitarian organisations. They provide free medical examinations to the needy, as well as clothing and mosquito nets. Evergreen hosts a Dengue Camp to raise awareness and avoid the disease. The Evergreen Club is a non-profit organisation dedicated to preserving the environment besides hosting cultural events.

The Jagat Mukherjee Park puja was founded in 1936 at Rajballav para in a garage, which is a short walk from the present location. The puja committee in Jagat Mukharjee Park is seen as a forerunner to the theme of puja. Another custom that they have observed since the beginning is Pujo Bijoya Samilani. The puja community participates in a variety of social welfare initiatives, such as offering financial support to those with thalassemia, distributing clothing and books to the less fortunate, hosting free eye and health screenings, and so fort

Kumartuli Park is still relatively new in comparison to other famous Durga Puja in Kolkata. The first Durga Puja was held here in 1995. The puja is notable because Kumartuli is the only site in the world where professional clay modellers who have been in the industry for generations make the majority of the Durga idols. Every year, you may anticipate something different.

In 1969, the Shree Bhumi Sporting Club was established and has now turned as one of the best Durga Puja in Kolkata. They founded the club to encourage young people to participate in sports. At the moment, the club has over 200 members. A cricket coaching camp is run by the club. Carrom, tennis, and combat sports are some of the indoor games that are promoted. Shree Bhumi participates in a variety of social activities. Their Durga puja is one of the most well-known in the state.

Tarun Sangha, Dum Dum Park, was founded in 1957. The South Dum Dum group is well-known for its social welfare efforts. Many immunisation efforts for COVID-19 have been undertaken by this cultural group. Their passion for the festival of Durga Puja is unrivalled. They constructed a pandal and an idol that is the ultimate of elegance.

In 1949, Ultadanga Yuba Brinda Samity was established and is now considered as one of the famous Durga Puja in Kolkata. This year, the club will hold its 54th Durga puja. Puja is held here by Ultadanga Pallishree. The Samiti, which is led by Dipak Roychowdhury, is involved in a lot of social activities too.

Sovabazar Rajbari puja was established by Maharaja Naba Krishna in 1757 at 33 Raja Naba Krishna Street and at 36, you will discover another Sovabazar Rajbari, Raja Rajkrishna’s home. Both of these are bothers, and they worship in both households to this day. Sovabajar Rajbari’s Durga puja is one of Kolkata’s most famous devotees nowadays. However, this year, outsiders are not permitted.

One of the famous Durga Puja in Kolkata, The Kumartuli Sarbojanin Durga Puja Utsav was founded in 1931. Netaji Subhas Chandra Bose, who served as ex-president from 1938 to 1939, had also visited this pandal once. Approximately ten lakh people visit their Pandal and Durga idol each year. As a result, this is yet another excellent Durga Puja pandal in Kolkata

One of the oldest and best Durga Puja in Kolkata lists cannot be completed without mentioning Deshapriya Park Puja in South Kolkata. Many tourists visit this puja pandal as the club ensures that they make something unique and extraordinary every year. In 2015, the committee made the longest Durga idol till date with fiberglass and cement. However, the puja had to be shut after a few days due to stampede-like situation created by puja hoppers.

The Tala Barowari Durgotsab, also known as the Belgachia Sarbojanin Durgotsav, was established in 1921 and is the eldest poojas in northern Kolkata. This themed puja has been going on since 2009. Today, it is a famous Durga Puja in Kolkata, and they have received several honours, including Asian Paints Sarod Somman, Star Ananda Superstar, and others. This year marks the 100th anniversary of the company.