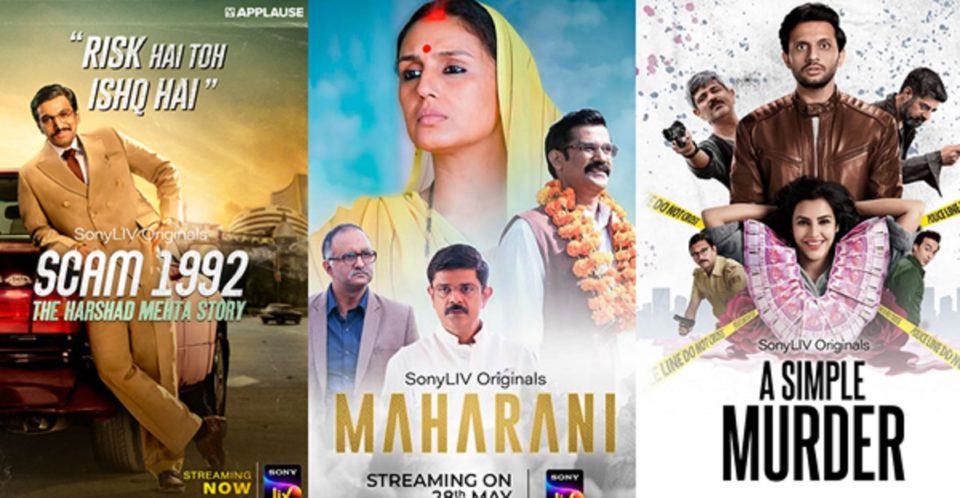 Unlike other OTT platforms such as Netflix and Disney+ Hotstar performing exceptionally well in India, Sony Liv has raised all bars until lately after launching Scam 1992. Sony Liv has since then proved to be a great OTT platform by launching engaging content and appealing web series that is liked by Indians. While the list is becoming gradually longer, we have shortlisted a few Indian web series that you can binge-watch right now on Sony Liv.

The plot of this Indian web series on Sony Liv centres on a Punjabi household with a retired cop as the patriarch. With several unexpected Incidents and their effects, see how far he will go to rescue his family. Supriya Pathak, Ranvir Shorey, Kanwaljit Singh and Pavan Malhotra feature in Tabbar, a Hindi family thriller that was just published on SonyLiv.

This financial thriller, adapted from Sucheta Dalal and Debashish Basu’s The Scam: Who Won, Who Lost, Who Got Away, became the most-watched Indian web series on Sony Liv. The series also stars Shreya Dhanwanthary, Satish Kaushik, and Rajat Kapoor, with Pratik Gandhi as the protagonist. This drama is a must-see with a superb cast and a foot-tapping background score. The play, directed by Hansal Mehta, will return with its second instalment, Scam 2003, based on the 2003 Stamp Paper Scam.

This programme is an underrated treasure, with an amazing star cast and a funny premise. The series, which revolves on a regular middle-class family, is nothing but great comedy. The Mishra family and their troubles are the centres of both seasons of the show. This one of the best Indian web series on Sony Liv, directed by Shreyansh Pandey and starring Jameel Khan, Geetanjali Kulkarni, Harsh Maya and Vaibhav Raj Gupta, is produced by The Viral Fever (TVF). This play will tug at your emotions and remind you of the small struggles you faced in your family.

The series, which revolves around the investigation of the 1993 Bombay bombings, highlights the same thread that runs across all three instances. Despite conflicting reviews from reviewers, the series is a thriller that keeps you on the edge of your seat. This series is directed by Sachin Pathak and Samir Khurana and stars Amit Sial, Gopal Datt, and Vikram Singh Sodha among many others.

Gashmir Mahajani, Pooja Gor, and Yudhistir Singh feature in Srikant Bashir, a crime thriller drama. Witness how two national intelligence officers with vastly different personalities get together to collaborate on a case. Two characters with vastly distinct ideas and viewpoints star in this thriller series. If you’re searching for something unusual to watch over the weekend, this series should be on your list.

This light-hearted drama is one of the Indian web series on Sony Liv that centres on a father who is attempting to develop a pleasant connection with his children. It emphasises the significance of family bonding and togetherness. Rajshree Ojha directs this show, which stars Cyrus Sahukar, Aradhya Ajana, and Saloni Khanna. This comic web series is undoubtedly a must-see.

Consider your parents and in-laws to be your next-door neighbours! Yes, it is what creates this Indian web series on Sony Liv named sandwich where Sameer and Naina are the sandwich’s pressed filling. This show follows a duo whose lives are changed forever after their parents move in next door and start probing around in their lives. There’s nothing better than watching this romantic comedy web series.

This political drama is partially based on Rabri Devi’s term as the state’s chief minister when Lalu Prasad Yadav names her as his successor in Bihar in the 1990s. This play, which stars Huma Qureshi as the wife of Bihar’s chief minister, is a must-see. Sohum Shah, Amit Sial, and Inaamulhaq star in the programme, which was created by Subhash Kapoor.

Avrodh: The Siege Within

This Indian web series on Sony Liv was launched on July 31, 2020. Amit Sadh, Madhurima Tuli, Darshan Kumaar, Umar Shariff, and others are among the prominent cast members of the web series. The web series’ narrative is based on a Surgical Strike by Indian Soldiers against terrorist camps near the POK sector of the LOC. It was the Indian government’s severe retaliation for a terrorist strike in Uri. All Indian’s nerves are tingling with excitement as the drama’s episodes air.

This comedy-drama, directed by Chaitanya Kumbhakonum, follows the rise and fall of a team of 4 females living in a college dormitory. This Indian web series on Sony Liv starring Ahsaas Channa, Simran Natekar, and Zahira Parul Gulati, portrays the everyday lives of such four students, encompassing their personal issues and how they battle the system as a whole. Watch this series if you’re searching for something different to watch.

This dark comedy drama tells the story of a Delhi-based businessman who aspires to become a company owner while trying to carry out his murder plot. Mohammed Zeeshan Ayyub, Priya Anand, Amit Sial, Sushant Singh, Gopal Dutt, Ayaz Kha, and Tejasvi Singh are among the promising actors in the series. So, if you enjoy comedy series and movies, A Simple Murder will be a good choice.

This sci-fi thriller follows a CBI investigator who is looking into a top-secret assignment involving a plane disaster in northern Bengal that occurred 35 years ago. Abhay Deol, Pankaj Kapur, Piyush Mishra, and Rajesh Sharma star in this compelling series directed by Shailender Vyas. This Indian web series on Sony Liv is a must-watch for Indian audiences because it is the first of its type. CBI officer Shantanu, played by Abhay Deol, has been tasked with solving this crime. The key climax of the drama will now be how he examines this case.

Eeshwar Nivas directs this thriller courtroom drama based on the Israeli online serial Kvodo. Jimmy Shergill, Pulkit Makol, Mita, Yashpal Sharma, and Parul Gulati play the lead characters in the series. The plot follows a judge who defies his morality and ethics in order to save his son, who is involved in a hit-and-run accident. This Indian web series on Sony Liv provides just the right amount of controversy and mystery to enhance your evening. It was published on the platform on June 18th, 2020.

The show’s narrative centres around five separate stories that are linked together via the internet. This Indian web series on Sony Liv emphasises the power of social media and the impact it has on children and teenagers. Tanya Maniktala, Varun Sharma, and Manjot Singh star in the programme, which was created by Mrighdeep Singh Lamba. This series is a must-see with its unexpected twists and turns.

This programme follows a real estate mogul who has been afflicted with a deadly sickness and urges his illegal son to take over his multimillion-dollar family building company. Vidur Anand, Trishaan Singh Mainin, Pranav Sachdev, Tithi Raaj, Simran Kaur Suri, and Ishika Taneja star in the miniseries directed by Sidhant Sachdev. This series deserves to be on your watch list since it has the right blend of passion and mystery.

Indians Can Travel to These Countries Visa-free! Check Them Out