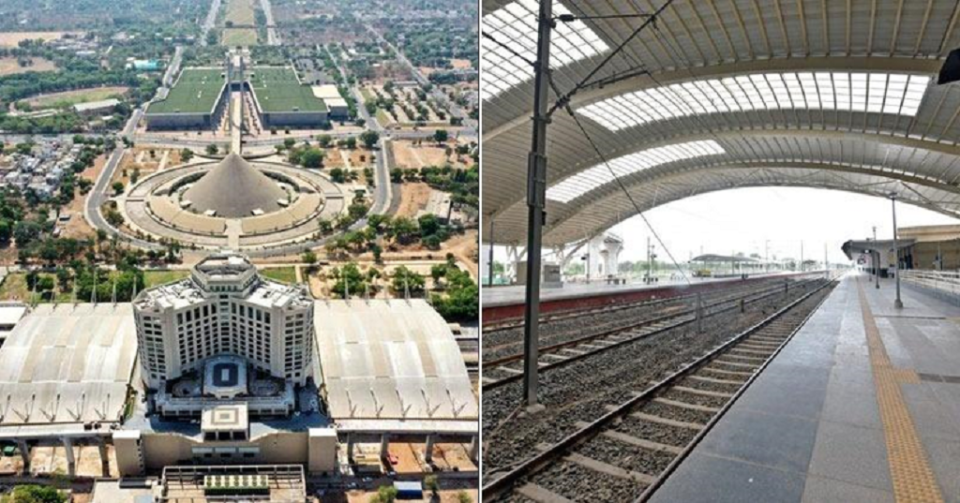 The Gandhinagar railway station Bhoomi Poojan was conducted by honourable Prime Minister Narendra Modi in a ceremony held in 2017. The project was scheduled to be completed by 2019 but missed its deadline.

The government officials report that almost 98% of work on the project has been completed and the rest will be completed soon.

It is reported that the remodelling of the Gandhinagar Railway station had cost a whopping 790 crores INR to Gandhinagar Railway and Urban Development Corporation (GARUD). The project was a joint venture of the Minister of Railway acting on behalf of IRSDC and the Gujarat Government.

Only 9% of the total project costs amounting to 75 crore INR was spent for the redevelopment of the railway station while the rest was spent on the hotel.

Inside the new railway station, you will find colourful paintings, bullet trains, Narendra Modi Cricket Stadium glimpse and a seaplane that adorns redeveloped railway station’s entrance which is spread at an area of 26,000 square meters.

The new station is located just 50 metres away from the old one and stands in alignment with the Dandi Kutir or the modern museum of Mahatma Gandhi spread like a slat mound. The Mahatma Mandir Convention along and Exhibition Centre also lies beside that were built under the guidance of the prime minister.

The new Gandhinagar Railway station comes with a dedicated transit hall where 600 comfortable seats are placed for passengers. The transit area has bookstalls, cafeterias, toilets and food stalls.

The five-star hotel lies at the top of the station premises which will cater to businessmen and tourists, especially the ones arriving during the Vibrant Gujarat Summit. The ground floor of the hotel lies some 22 metres above the ground.

The three-building built is given the shape of a flower petal. Together with the hotel, the Gandhinagar Railway station has become one of the tallest buildings in the Gandhinagar district. In total, the station will comprise 3 towers of 6,8 and 10 levels.

Currently, the new railway station will be connected with only 7 pairs of passenger trains that include the new Gandhinagar-Varanasi superfast express along with Gandhinagar-Varetha MEMU or Mainline Electric Multiple Unit. All the trains had been flagged virtually by PM Modi on the inauguration day.

The new Gandhinagar Railway station has three platforms that can be extended to five. The station has two subway interlinks that connect these platforms.

While the old platforms were 525 metres long, the new ones have been extended to 650 metres that match with existing train length.

The parking area of the railway station can park 1000 cars, 100 auto-rickshaws and 200 two-wheelers at a time.

The railway station also has facilities for differently-abled people. It has 3 lifts and 2 escalators that can help handicapped people transmit seamlessly.

The state government holds 74% equity in GARUD and has signed to lease the hotel to famous Leela Ventures Ltd for 30 years.

The Gandhinagar Railway not only has an interesting interior but also mesmerising external façade with a vertical lush green garden and theme-based lighting. The station has a centralised air-conditioned waiting lounge. The building architecture includes green building rating characteristics besides receiving green certification standards from the ASSOCHAM.

The station has a concourse for departing passengers besides two subways to receive arriving passengers. At a time, Gandhinagar Railway station can hold 1500 passengers during peak hours and when the concourse is in use, the number of passengers can go up to 2200. Accordingly, food outlets and other facilities have been planned.

Beyond Blues: 8 Ways in Which Mental Illness Looks Different for Women

Why Machine Learning Is Being Termed as the Next Big Thing