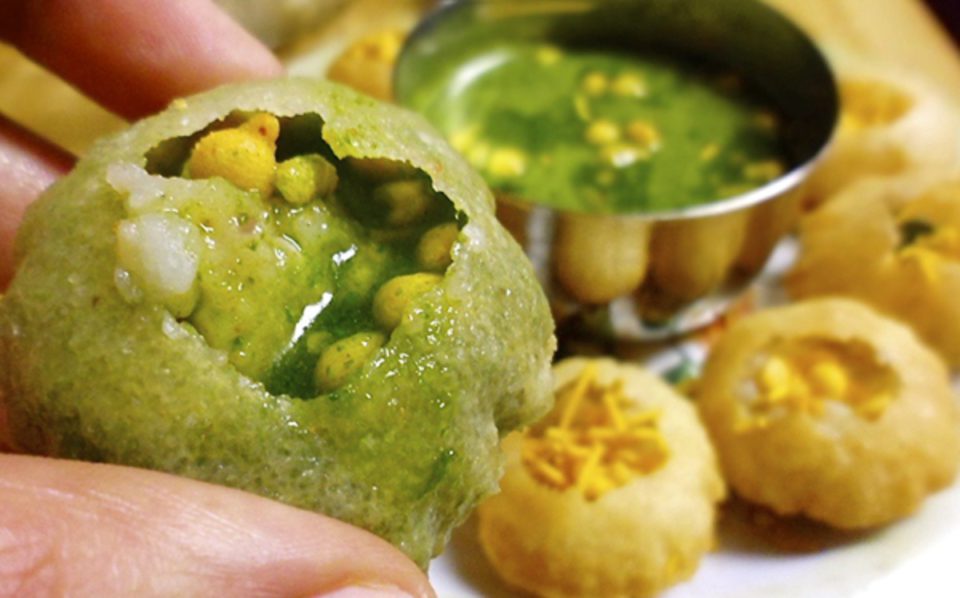 India is a vast country that boasts a diverse range of regional cuisines. Historically, India used to produce around 75% of the world’s spices. In fact, you will find here some of the tastiest dishes worldwide. While in Kolkata, do not forget to try street food sold by vendors that are tastier than many other cuisines worldwide. Every corner of the city attracts thousands of foodies every year, especially during the grand Durga Puja festival. If you ever visit Kolkata, you must try the unique street food listed below for an unforgettable gastronomic experience.

Puchka or water balls, sometimes called Panipuri and Fuchka is one of the most famous street foods in Kolkata and is easily available in Kolkata alleys. The puchka selling vendors are available in almost every place in the city but Esplanade and Park Street vendors sell better than the most. Apart from being spicy and tasty, puchkas are very cheap as compared to other food which makes them a favourite of many.

Like Delhiites, Kolkatans like Kachori Aalu dum in their breakfast, just as they enjoy Chole Bhature in Delhi. This street food comprises fried kachoris accompanied by potato curry. Although many sweet shops and street vendors sell kachori aalo dum, you must try them when at Kolkata’s Burrabazar for the best taste.

Just like kachori aalo dum, Burrabazar samosa is also very famous. This snack is usually served with tea or coffee for breakfast or as an evening snack. Tiwari Brothers sell amazing samosas and you must definitely try them at least once.

Rosogolla is one of the most famous street foods in Kolkata and it is feasible that every foodie must have heard its name. This sweet dish is popular worldwide and many people visit West Bengal to savour its sweet taste. Rosogolla can be bought from any sweet shop available in almost every corner of the city.

Mutton kosha is yet another famous street food of Kolkata which is loved by non-vegetarians. A restaurant in Shyambazar known as Golabari Restaurant serves the best Mutton Kosha in the city.

Kolkata is famous not just for selling national and regional cuisines but also for Tibetan and Chinese. One of them is momos which have been a favourite of Kolkata’s for ages. If you too love momos, try the ones sold by street vendors near the Rabindra Sadan Metro exit which sells momo with spicy chutney and hot soup. This place is usually flocked by college students and office goers due to its good taste and low price.

If you love eating spicy food, jhal muri is the best street food to try. Jhal means spicy and muri mean puffed rice which together makes a famous street food in Kolkata. The puffed rice mixture is made by adding various accompaniments such as onions, tomato, spices, coriander and others that gives this dish a perfect spicy flavour. You can find jhal muri vendors in various parts of the city.

Tela bhaja is a fried snack made from vegetables such as brinjal, potato, onion and chillies. The fries are made fresh and served hot with chutney. A famous shop that is more than 50 years is Kalika Mukhorochok Telebhaja on College Street. Tela bhaja is loved by Bengalis very much and they like to have them as an evening snack.

Mishti is a Bengali term meaning sweet and doi stands for curd. The thick mishit doi available in Kolkata’s sweet shops is a must-try. They can be easily found in every sweet shop in the city and is available in grams.

If you visit any historical tea stalls around the city, you will notice Kolkata’s love for tea. Most of them serve tea in small earthen cups which makes the tea flavour better. One of the old tea sellers Balwant Singh House in S.P Mukherjee Road sells a unique kind of beverage called Doodh Cola. Apart from it, they sell different flavoured tea you must not have heard about.

If you crave Maharashtra’s special pav bhaji while in Kolkata, do not worry as Kolkata Street vendors make them well. Be in Camac Street or Burrabazar, pav bhaji sold by the street vendors tastes awesome. But, if you seek to have them in the shop, try Mayaram’s on the Lord Sinha Road which makes the best pav bhaji in the city.

In Kolkata, you may not see many Lassi or fruit juice sellers on road but you will find flavour soda sellers at many places. This is the kind of soft drink that people of Kolkata like the most. They come in a variety of flavours like lemon, mango, fruit beer and orange which can bring instant energy to the body amidst scorching heat.

One of the most famous street food in Kolkata which looks like chicken cutlet is Chicken kobiraji. This street food is favourite of Bengalis and is made with eggs and chicken. They are available in many street shops and can be bought at a very low price.

Kulfi is like a boon during the hot humid summers in West Bengal. While most of the states in India sell traditional kulfi with a common taste, Kolkata Street vendors have kulfi of different flavours like mango, Chiku, orange, lichi and banana. To try them, you can visit Camac Street, near Pantaloons or near the Burrabazar area which is famous for Sitphal and Kesar Pista Kulfi.

A Kolkata Street food with a mix of the traditional chicken recipe and Chinese sauces, schezwan chicken is a must-try for all non-vegetarians. New Market is home to some of the most famous food joints in the city.

Vardaan Market is one place in the city which is more popular for its street food than other items sold nearby. The market lies on Camac Street and has many street vendors selling some of the tastiest street foods. One of them in chilla made from lentils

Fish is one of the staple foods of West Bengal and is loved by the locals and people visiting Kolkata. Near the Gariahat Metro is a small food joint that sells awesome fish fries. They sell butterfish as well which will make you want more.

Like Rosogolla, chanar payesh or rosomolai is loved by the locals and is considered Bengal’s specialty. The sweet is made with milk and served with dry fruits. You must try the ones sold at Esplanade for an unforgettable experience.

This is one sweet dish found only in the West Bengal region. The dish looks like a jalebi, but it is made with chena, sugar syrup and dried milk powder. You can buy one of the most famous street foods of Kolkata from local sweet shops available on every hook and corner of the city.

Mumbai Travel Guide: Top Things to do in Mumbai