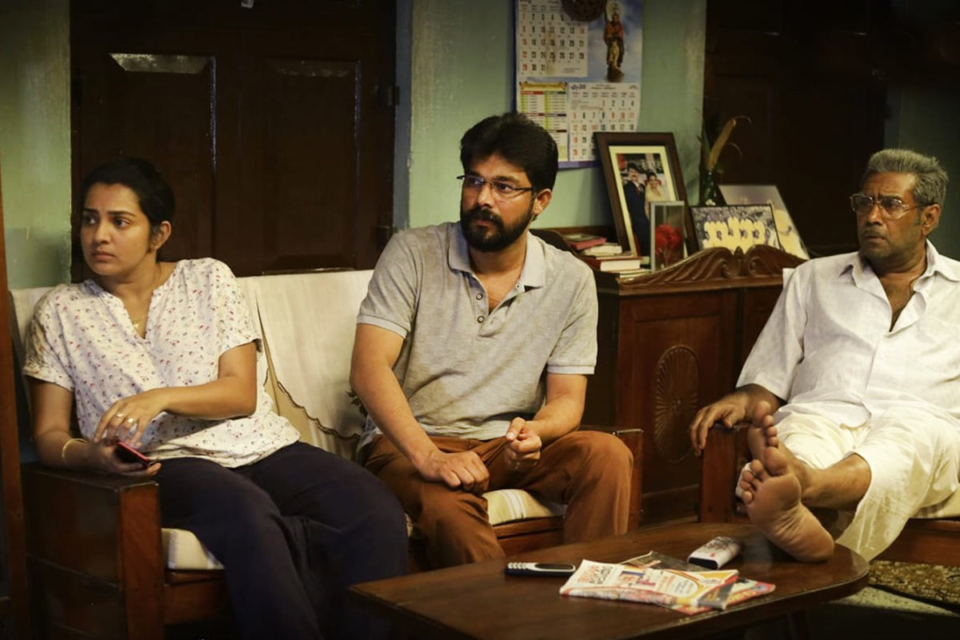 Aarkkariyam leaves a lasting impression on the audience. A film that ends perfectly, peacefully. Directed by Sanu John Varghese, ‘Aarkkariyam’ is a film based on the life of a Malayalee man called Ittyavira. The story begins with Shirley, the daughter of Itiyavara, and delves into the realities of life through his daughter. Inside his lonely home in Palai, Kottayam, Ittyavira finds himself alone in the silence of a new world created by COVID. Soon his daughter and her husband Roy get there. A lot happens when they move from their busy life in Mumbai to the atmosphere of Kerala, for a short vacation.

But their arrival is not a coincidence, a mystery is hidden inside this journey. The secret is haunting the movie making this one of the best 2021 Indian mystery drama films. A secret known only to the cast, influences the course of the story itself.

The possibility of hidden details exposed between Roy and Itiyavara adds to the mystery of the story. The story also hides an indirect narrative of the extent of the impact of certain events on an individual’s life.

Why is Aarkkariyam so enticing?

True art has value beyond its commercial value

Aarkkariyam was released on 1 April 2021 and eventually streamed on Amazon Prime Video.

Screenplays that created superheroes (like Drishyam) are beginning to make their way into more and more human life. Therefore, an actor will have to change his lead role and glamor to act in life-affirming films. Here Biju Menon has done it in the most natural and beautiful way.

Aarkkariyam which literally means Who Knows will only pass if a great intimacy (and questionability) is left within the audience. It ends perfectly calmly and peacefully. As a representative of a generation eager to move forward, Aarkkariyam fills that figure with gentle intimacy.

Aarkkariyam actors and crew: a match made in heaven​​

The characters played by Parvathy Thiruvoth and Biju Menon will probably remain in Kerala society forever in the form of immortal characters in novels or short stories through such relevant films.

Aarkkariyam is sure to be one of the highlights of Biju Menon’s acting career. At the age of seventy-five, he was able to easily become the character of Ittyavara. Here, Biju Menon has taken another angle of his talent by adopting the Christian character’s personality in acting, sitting and gestures.

There is an experience where the film and the inner joy of the audience are reconciled. That experience is what we imagine the best literary works leave behind. In the old days, there was a lovely romantic atmosphere left by Biju Menon in ‘Meghamalhar’ and ‘Mazha’. One that is still secretly cherished by a generation.

Clearly an actor, Biju Menon excels at acting, transforming himself into another synonym of acting perfection.

Parvathy also played the lead role in the film. Another strong presence was announced by Sharafuddin.

Sharafuddin was breaking down as Roy. All the other characters presented their own parts in a way that was most inappropriate for the film. The possibilities of technically perfect cinematography are also magnificently used in cinema.

Nationally renowned cinematographer Sanu John Varghese, who has directed a number of films, has made his debut as a film director. The cameras of this film were the work of Srinivasa Reddy. The film is scripted by Rajesh Ravi and Arun Janardhanan along with director Sanu John Varghese. Each and every one of them managed to bring the landscape of Kottayam and Idukki districts in likeness to old Malayalam movies, only this time it’s a thriller.

Aarkkariyam is more notable as the best screenplay. Mahesh Narayanan’s editing excellence should be highlighted at this stage.

The music composed by Neha Iyer and Yakshan Gary Perera is also very gripping. The music and visuals appropriate to the background of the film help the audience realize realistic experiences on screen. The fact that it has been experienced for a long time is another feature of Aarkkariyam

Why Should You Stop Sharing Your Makeup and Cosmetics With Others?

Jathi Ratnalu: An Honest Review With A Message