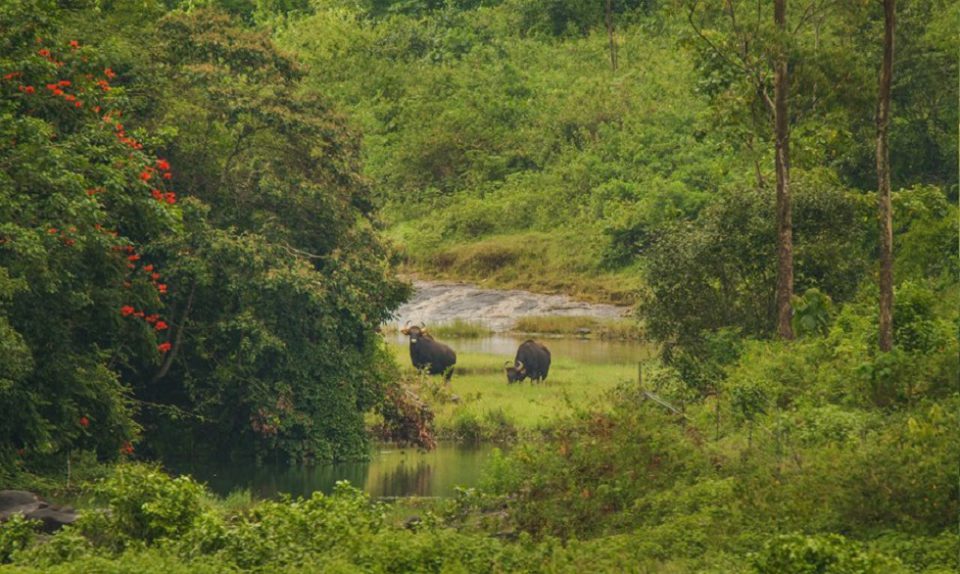 The Annamalai Tiger Reserve is also known as The Indira Gandhi Wildlife Sanctuary and National Park. The Reserve is situated in the southern parts of India and comprises a unique collection of animal and plant species. The Annamalai Tiger Reserve not only protects endemic plants and animals but also makes this place a tourist hotspot for nature lovers who desire to witness the marvels of the natural landscape.

The Annamalai Tiger Reserve was declared as an official site to Reserve plants and animals in the year 2007. The species also includes tigers and elephant’s which are rare and need protection. This is the reason people say that visiting Tamil Nadu Western Ghats will be incomplete of you do not visit Annamalai Tiger Reserve to encounter nature in its truest form. The place also hosts more than 6 different tribal communities among which one is endemic to the area.

The Annamalai Tiger Reserve though got officially declared as a Reserve in the year 2007, its management history can be dated back to 1848. The forest area has various flora and fauna and supports diversified habitats including semi-evergreen forests, wet evergreen forests, dry deciduous, moist deciduous, shola forest and dry thorn. Some of the unique habitats in this area are savannah, montane grasslands and the marshy grasslands. Manmade regions include teak plantation, wattle, pines, eucalyptus exotics and deep-water ecosystems developed by Parambikulam Aliyar Project. You will be amazed to know that the Park and the Sanctuary area has been considered by UNESCO as one of the parts of the Western Ghats World Heritage Sites.

Top places to visit in the Annamalai Tiger Reserve

Topslip in Annamalai Tiger Reserve forest is a small range and lies at an altitude of 2554 ft. The hills provide tourists with some enchanting viewpoints of the entire Annamalai Tiger Reserve surrounding Topslip. Surprisingly, we found that Topslip got its identity or name during Colonial-era while the East India Company discovered this forest. They found many teak trees grown in the area that could be used for commercial purposes like the building of ships, fuel for locomotives and for the construction of railroad tracks. They began cutting the trees in the downhill and started a new method where trees were cut, slipped and rolled from the hilltop and taken away by the timber lugging elephants. If you ever visit Topslip, do not forget to climb up to Mt Stuarts Hill where lies a tomb of the forest officer named Hugo Wood. He was the one who showed dedication to regrow the forest again and fill it with teak plantations in the surrounding areas of the Topslip.

Parambikulam Tiger Reserve in the Annamalai Tiger Reserve is considered as one of the best wildlife hotspots conserved in the Western Ghats. The reserve has many diverse zones comprising several species of flora and fauna like leopards, elephants, and wild tigers. Many freshwater streams flow amidst the thick forest area which makes this place an ideal site for visiting.

A trip to Valparai in the Annamalai Tiger Reserve can prove to be a worthy holiday destination as it has every holidaying element that is desired by travellers who like to spend time amidst nature. Valparai is a small town in which the Annamalai Tiger Reserve lies in its north-east and the north-west portion is filled by the Parambikulam Tiger Reserve. The place is more commonly known as the Seventh Heaven due to wild forest and lush verdant hills filled with flora and fauna. Many dams have been built in this place coupled with few manmade and natural waterfalls. One of the famous waterfalls in Valparai is Chinna Kallar and is the wettest region which falls under Valparai. Some breath-taking viewpoints loved by travellers visiting this place are Loams viewpoint and Craver marsh which gives the view of majestic hill peaks along with the fertile valleys.

Karamalai Annai Velankanni Church is one of the churches in the Annamalai Tiger Reserve which resembles Nagapattinam Velankanni Basilica. This church sitting majestically on the hilltop is surrounded by the green undulating hilly slope. You can hear sounds of the chirping birds which makes Karamalai Annai Velankanni Church one of the best options to meditate and pray amidst nature. There is a stream running beside the church and a waterfall named Irachi Parai which itself provides some picturesque views. You can also visit Karamalai Balaji temple which is placed very close to the church area.

Beside Amaravathi River in the Annamalai Tiger reserve, Amaravathi dam was built in the region belonging to Trippur district. The main purpose behind developing the dam was to serve the irrigation and flood control through the reservoir. This reservoir contains large crocodiles, cormorants, Indian Flap shelled turtles along with otters.

The Amaravathi farm in the Reserve was formed in the year 1976 and is regarded as one of the largest crocodile farms in India. Several crocodile eggs can be easily found in the nests alongside the river bank which are hatched and reared in the farm. There are steps made in this park to make it easier for the travellers to climb the hill and get a good view of the Palani hill and the Annamalai hills.

Amanalingeshwara Temple in the Annamalai Tiger Reserve has a separate story altogether. It is said that this place was once a heritage site of Sage Athiri beside the Thirumoorty Hills where Brahma, Shiva and Vishnu appeared after Anusuya. Anusuya was the wife of Sage Athiri. The Amanalingeshwara temple is one of the Pancha-Lingasthala where the holy priest Agastya worshipped Shiva. To visit this holy temple, you need to travel 50 km from Pollachi on the road of Palani to Coimbatore. The temple is some 80 km away from the Annamalai Tiger Reserve main entrance.

The Masani-Amman temple can be found in the backdrop of the Annamalai hills surrounded by beautiful and lush green fields. The temple is said to be enriched with some of the most powerful deities worshipped in the Annamalai hills. History says that in the ancient times, Annamalai was ruled by a king who followed rules very strictly. Once, a young girl plucked the mangoes from the orchard and was accused of stealing them. She was sentenced to death for stealing the mangoes. Out of fear from the wrath of gods, the girl’s shrine was created afterwards since the girl was misjudged. She is regarded as an epitome of Parvathi by the locals. The Masani or Mayana Sayani is the goddess of the hills and is said to be the sole protector of the hills from witchcraft and ailments. A stone of Justice known as Neethi Kal is placed in the temple which is offered ground chillies. The Justice stone helps people in recovering from diseases and stolen goods.

The Subrahmanya Swami temple in the Annamalai Tiger Reserve is the east-facing temple where the primary deity is Subrahmanya. The deity is placed on the pedestal that is consorted by Deivasena and Valli on either side. The main peculiarity about this temple is that the shrine and its vehicle peacock is carved from the same stone. The temple was built during the era of King Kongu Sundara Panidan and Kongu Thirbuvana Chakravathi Vikrama Chola. The temple was built for Lord Shiva and named as Thiruvahateshwaramudayar temple which was later called as Subrahmanya temple. The temple has the shrines of Rama, Sita and Shiva as well.

Top Things to do in the Annamalai Tiger Reserve

Trekking in the forest

If you seek trekking amidst the wild and forest area, you must visit Annamalai Tiger Reserve. To start with, you can hire an eco-trip van safari that will take you around the Kozikamuthi elephant camp located at the Tophill. You can opt for enjoying elephant safari before indulging yourself into treks in the forest. Elephant safari is organised by the forest and park management teams and are usually available from morning 10:30 am to 3:30 pm. You can have the opportunity to spot a lion, tiger, wild elephant and leopards if you are lucky enough! The organised treks present in the forest ensures that your trekking experience is made a memorable one and is safer. Do not forget to hire a professional guide that will guide you through segregations of short and long treks. Avoid monsoons as you might get yourself infected from mosses and lichens abound during monsoon season in the area.

Kozhikamuthi in the Annamalai Tiger Reserve is one of the oldest camps which protects and trains elephants to carry timbers and goods from one place to the other. Since the felling of trees in the woods was restricted in the 1970s, the camp located in the Topslip has become one of the favourite tourist spots where people visit to go for an elephant ride. The Malasar tribes take care of the elephants in the camp while the Kumkis are the ones who train the elephants and control the wilder ones who often go for a rampage.

Photo-shooting at the Aliyar Dam

Valparai in the foothills of the Annamalai Tiger Reserve is one of the best holidaying spots which is visited by many travellers’ throughput the year. The Aliyar dam is constructed beside the Aliyar river that provides the tourist with some unique and picturesque views. Not to mention, the aquarium and the garden add to the beauty of the region while the mountains and hilltops at the backdrops make this place a must to see in India.

Have a bath in the monkey falls

One of the best places to visit in the Annamalai is the monkey fall which is one of the falls that gets filled up by the Southwest monsoon rains. Monkey falls is located at a proximity to Aliyar dam. Do keep an eye on the mischievous monkeys while having a bath at the monkey falls as they might snatch valuables from you!

Enjoy nature at the Grass Hills

Around 15 km from Valparai in the Annamalai Tiger Reserve, the Grass hills can be seen where you will find sloopy hills covered with green meadows of grass. The hills lie at an altitude of 2400 metres above the sea level and homes some very exotic fauna such as elephant, gaur and langur. Since this is a protected land, you might need permissions from the Forest Department to visit the area.

In the Topslip of the Annamalai Tiger Reserve, an eco-shop can be found that is operated by the tribal living in the hills. You can buy forest goods from the eco-shop that are handcrafted by the local tribes. Spices like cardamom, pepper along with honey and oil can also be purchased from this place. For souvenirs, you can opt for exotic tea bags or T-shirts that are imprinted with the pictures of the wildlife.

If you want to visit Annamalai Tiger reserve, winter can be the best option not because of the season but because winters witness the Gaja Puja celebrated by the locals in the region. The festival is just like traditional Sankranti or Pongal festival which is celebrated to honour cattle. The Gaja puja honours elephants and thus elephants are bathed in the mountain streams before making them stand in a row for doing the puja. Sandal paste is applied on the foreheads of the elephants before they are treated with special dishes.