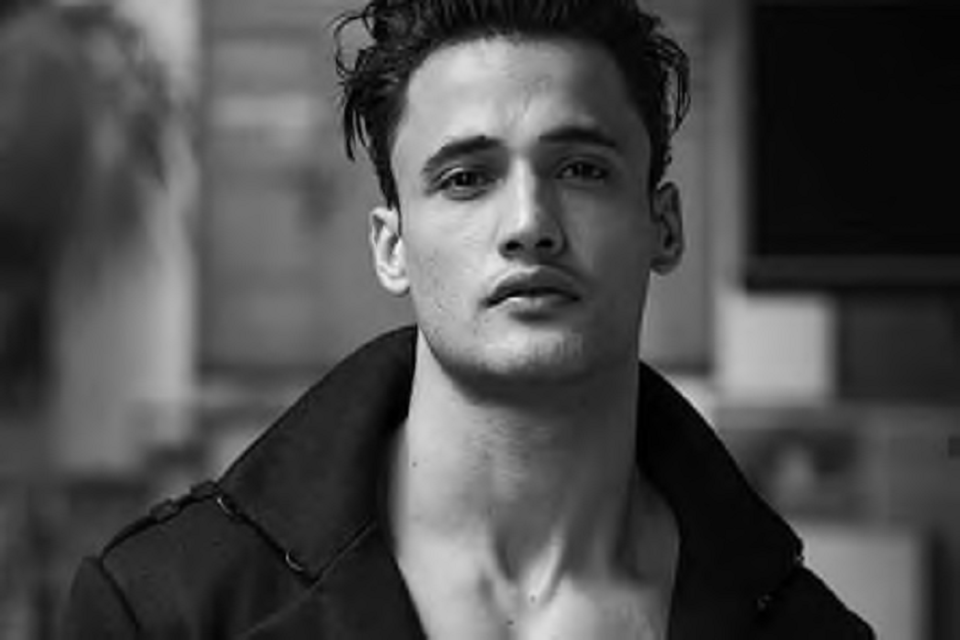 Kashmiri Model, Asim Riaz ((born 13 July 1993) was one of the least popular contestants on the show when he first entered the Bigg Boss house for Season 13. However, he left everyone stunned with his growth graph. He has come a long way for sure. Leaving behind big names of the industry like Rashami Desai, he made it to the top 2 finalists of the show. However, he lost the winner’s trophy and it broke many hearts. With his stint on the Bigg Boss show, Asim Riaz has managed to create a loyal fan base for himself but even before that, he was a model for brands like B’lue, Blackberrys, Numero, Uno, and more. Here is a biography and interesting things to know about Asim Riaz.

1. Modeling, advertisements and side roles:

Asim has been featured in many TV commercials like Blackberrys, B’lue, Numero Uno, etc.

He has been featured in TV ads with Shah Rukh Khan as a background model.

Before Bigg Boss, Asim Riaz has been a part of many commercials and photoshoots as a model. An old commercial of Asim Riaz with Shah Rukh Khan is going viral on the net. This was a soap commercial that starred Shah Rukh Khan and Katrina Kaif. Asim can be seen among the background artists. Looks like this one is a really old video, Asim looks younger.

Asim Riaz was born on Tuesday, 13 July 1993 (age: 28 years, as in 2021) in Jammu, Jammu & Kashmir, India. He did his schooling from Delhi Public School, Jammu, J&K. After that, he completed Graduation in marketing and moved to Mumbai to pursue a career in Modeling. Today, he continues to live in Mumbai.

Asim Riaz was born into a Muslim family. His father, Riaz Ahmed Choudhary is a retired special secretary to the government of Jammu and Kashmir and a politician. His mother’s name is Shabnam Naz. His sister, Mahvish Choudhary, works at the department of education. Asim has an elder brother Umar Riaz he is a professional doctor.

Asim Riaz  gained popularity after he made his Indian television debut in Bigg Boss 13.

2020 gave a rising star to the world in the name of Asim Riaz and the model became the first runner up of the show.

Soon after that, the country went into coronavirus lockdown but during a recent conversation, Asim was quizzed about not being a part of Bigg Boss 14 like Sidharth Shukla (the winner) who entered as ‘Toofani Senior’.

Asim shared his reasons in an interview with Bollywood Bubble in the next point below.

4. Fellow contestant Shefali Jariwala did not like him, calling him the most negative and toxic person inside the house:

During the Bigg Boss 13 Weekend Ka Vaar episode, Salman Khan announced that Shefali Jariwala has been evicted from the show. She was one of the wildcard contestants who managed to stay for this long. During her stay, she was initially good friends with Asim Riaz, however, things turned ugly and they were fighting constantly. Shefali then started staying with Sidharth Shukla, Paras Chhabra and Mahira Sharma.

After moving out from Bigg Boss 13, Shefali spoke about her turning point with Asim.

She was also asked if there was something more than friendship between Asim and her. To which she stated, “Oh no, not at all. Asim did hit on me initially. It wasn’t direct, but everyone in the house had sensed it. However, I made it clear to him that I am a much older, a married woman, and I am not interested.”

Jariwala further said, “That’s when he shifted his focus to Himanshi, who, too, didn’t give him any attention back then. So, he used my friendship and me to get close to her. I have never taken a fancy for Asim. Yes, I did love him as a friend; I always called him my little kiddo in the house.”

On the topic of joining Sidharth’s group, she said: “I am always pro-Sidharth. There were issues with him in between, but I have known him for a long time, and I will vote for him. I want him to win the show. At the moment, Asim is the most negative and toxic person inside the house.”

The model and actor who shot to fame with the previous season of the popular reality show Bigg Boss, was offered a chance to be a part of the ongoing season – Bigg Boss 14. However, he turned the opportunity down saying that he was not keen on spending almost five months in the Bigg Boss house.

In an interview with Bollywood Bubble, Asim confessed that, “Yes, I was offered. But the thing is that I have to spend 140 days in the house. It was a long time. For me, at that time I just recovered and it leaves an impact on your head that you just remember something and it’s like ‘I don’t want to go back’.”

“This is not the right time for me to go. I thought I have just recovered and doing good in my life. If I get a chance I will go. But at that time when I was offered, I wasn’t ready to be very honest,” he added.

Bigg Boss 14 has seen the entry of many former contestants. In the beginning, Sidharth Shukla, Gauahar Khan and Hina Khan entered as ‘seniors’ for a two-week stay in the house, and were given special powers.

A number of other contestants entered as ‘challengers’ to compete for the trophy. These include Rakhi Sawant, Kashmera Shah, Manu Punjabi, Vikas Gupta, Arshi Khan and Rahul Mahajan.

Asim, meanwhile, has been busy with music videos.

In 2020, he was seen in the music video of Armaan Malik’s single, Veham, alongside Sakshi Malik. He will also come out with a rap song of his own soon. Asim Riaz confirmed that he will soon be collaborating with Bohemia for a new track and also talked about doing a song with Himanshi Khurana.

7. His girlfriend is Himanshi Khurana:

Asim and Himanshi met on Bigg Boss 13 and their closeness was one of the biggest talking points of the popular reality show. Though Himanshi was in a long-term relationship with someone else and engaged when she entered the Bigg Boss house, she grew close to Asim, who was always vocal about his feelings for her.

Post her eviction from Bigg Boss 13, Himanshi broke up with her fiancé and re-entered the show to let Asim know that she was single. He then got down on one knee and proposed marriage to her. The two have been in a relationship ever since.

Asim was the runner-up of Bigg Boss 13. In a press meet, Himanshi said that she took a backseat after the finale as she wanted him to meet his family first, but he came looking for her and took her to meet his parents. “Main tab bhi bohot shy feel kar rahi thi aur main usko bol rahi thi ‘relax’. Unhone bola, ‘Nahi, main pehli baar apne father se kisi ladki ko milwa raha hoon’ (I was feeling very shy even then and I kept telling him to relax. But he said, ‘No, this is the first time I am introducing a girl to my father’),” she told reporters.

Asim and Himanshi have starred together in a number of music videos after Bigg Boss 13, including Kalla Sohna Hai, Khyaal Rakhya Kar and Afsos Karoge.

Most recently in late 2020, Asim Riaz drove his girlfriend Himanshi Khurana to the airport, as she left for Chandigarh for the shoot of a music video. The couple seem to be still going strong.

According to a report in The News Crunch, Asim has bagged his first Bollywood project opposite another ex-Bigg Boss contestant Sunny Leone, which will be directed by Mahesh Bhatt. In fact, a clip of Asim and Sunny grooving together also went viral from the episode. They looked absolutely perfect together and by the looks of it, will share really great on-screen chemistry.

Speaking of acting, Asim had played a minor role in Varun Dhawan’s film, Main Tera Hero. Many don’t know that Asim Riaz was also a part of Varun Dhawan’s Main Tera Hero in the year 2014. He played a supporting role in the movie. When Varun Dhawan entered the Bigg Boss house for promotions, he also praised Asim Riaz.   A few days back, there were reports that Asim Riaz has bagged Student Of The Year 3 opposite SRK’s daughter Suhana Khan. However, director Karan Johar cleared the air and posted a statement on his Twitter. He wrote, “Absolutely baseless stories making the rounds of SOTY3! My request to everyone publishing this fabrication is to kindly Stop! Please!.”

Riaz is a fitness or gym enthusiast and he spends hours in the gym to maintain his physique.

Asim already has made a loyal fan following from his stint in the show and never misses a chance to take his shirt off to flaunt those drool-worthy abs. Looks like all has not gone futile as the actor is now all set for his Bollywood journey!

10. Last year, he was mobbed by fans at an event in Gujarat:

The Bigg Boss Season 13 show’s first runner-up Asim was mobbed in 2020 by his fans and the crowd in Gujarat when he went to the city for an event.

While some have debated about his contribution to the show, there is no doubt that Asim Riaz’s journey was the most phenomenal one. The Kashmiri model was the dark horse of the season. Asim Riaz won over people with his honesty, competitive spirit and fierce spirit. He was one of the true gamers of the season

11. He got mobbed again! by goons during a mid-night bicycle ride!

Asim Riaz was taking a mid-night bicycle ride which is when the goons came on a bike and beat him up from the back. Asim shared an Instagram story of the bruises, cuts and wounds all over his body post the attack. He called the goons ‘cowards’ who did not have the guts to attack him from the front.

“I was cycling right now. Some guys on the bike hit me from behind. Not from the front,” Asim said in the video while showing the injury marks on his body.

“Everything is cool, I still don’t give up,” he added.

The video has taken over social media. Fans of Asim are wishing him a speedy recovery and also expressed their anger over the attack on him.

Asim Riaz has indeed managed to impress everyone with his personality on Bigg Boss. It will be really interesting to see Asim Riaz doing his other projects.