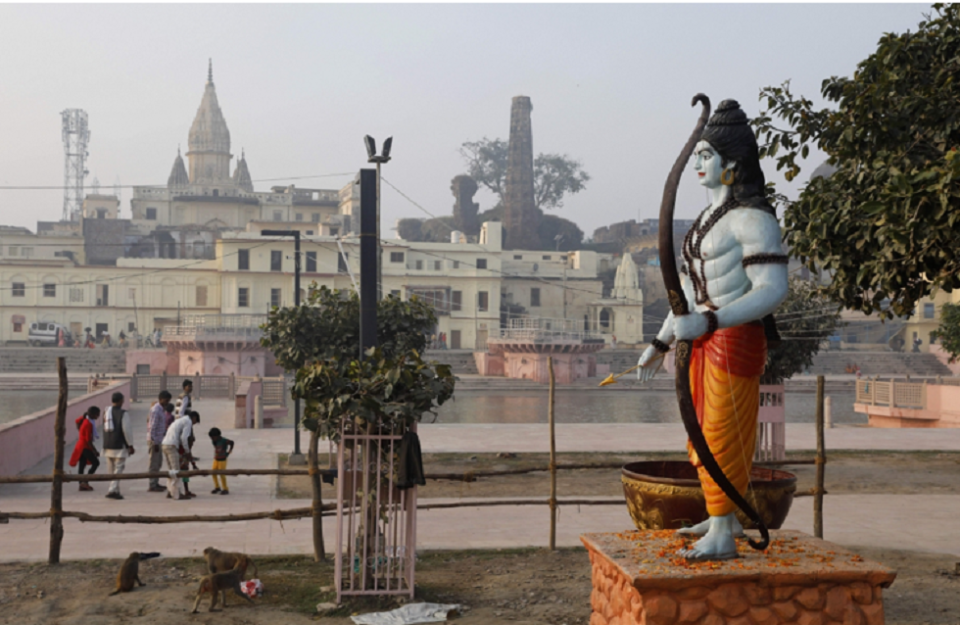 Ayodhya, an ancient and the holiest place in India is one of the seven holy cities of the Hindus. This is so because this city has always been associated with a great Indian epic Ramayana and being the birthplace of Raja Ram, son of Dasharatha.

Ayodhya is also known as Awadh or Oudh and is located in the South-central Uttar Pradesh in the Northern part of India. Lying beside the Ghaghara River, Ayodhya city is all set to begin a new era with the construction of Colossal Ram Mandir.

The history behind the Ayodhya city

In traditional history, Ayodhya was the capital city of Khosla. However, during the Buddhist era in between 6th and 5th century BCE, Shravasti became the main city of the kingdom. Many scholars believe that Ayodhya is identical to Saketa, a place where Buddha resided for a considerable period.  Many monuments like Stupas can be found in the city that were built during the Mauryan empire and Ashoka’s rule in the 3rd century BCE.

It is said that the great Kanauj kingdom arose in the city of Ayodhya and was named Oudh in the 11th and 12th centuries CE. Later, this place was included among the Delhi Sultanate i.e. the Jaunpur kingdom in the 16th century. In 1764, Oudh became subordinate of the British East India Company an in 1856 it was annexed by the British government. The annexure and loss of rights faced by the hereditary land revenue receivers caused the rise of Indian Mutiny in 1857. Agra presidency joined Oudh in 1877 to form United Provinces of Agra and Oudh which now lies in the state of Uttar Pradesh.

Facts behind Babri Masjid in Ayodhya

According to Hindu mythology and epic, it is stated that in the 1st millennium BCE, Rama was the king of Ayodhya. Hindus believe that the site of demolished Babri Masjid belonged to Ram and is the birthplace of four sons of Dasharatha. The Babri mosque was constructed in between 1528-29 by ‘Mir Baqi’, also known as Baqi Tashqandi who was the commanding general of the Mughal emperor Babur. Though, the legitimacy behind the constructed facts is still scanty and lacks proper pieces of evidence.

In the year 1611, William Finch, an English traveller visited Ayodhya and mentioned about the Ranichand or Ramchand ruins such as castles and house. He did not say anything about the Babri mosque. Again, in 1634 Thomas Herbert visited the place and described the beautiful castle of the Ranichand. He stated that the castle looked like a monument and was “especially memorable” for him.

In 1672, however, the appearance of the mosque in the Ayodhya city was mentioned due to Lal Das Awadh Vilasa who mentioned the location of the Rama’s birthplace without mentioning anything about a castle or temple. In 1717, Jai Singh II, a Moghul Rajput bought the lands surrounding the temple site and his documents showed mosque present in it.  In 1810, the place was visited by Francis Buchanan who mentioned that the destroyed structure on which the mosque was built is of a temple of Rama and not any ordinary house. Many sources say that the mosque was built repeatedly after demolishing the Rama temple.

Before 1940, the Babri mosque was called as the mosque of the birthplace or Masjid-i-Janmasthan. According to Faizabad District Gazetter in 1870, H.R. Neville, the Janamasthan temple was demolished by Babur and thereafter the Babri masjid was built. He also wrote that the Janamasthan is in Ramakot. In 1528, Babur went to Ayodhya and stayed there for a week between which he destroyed the Rama temple to built a mosque under his name. The old temple ruins were used in the mosque and many columns were preserved.

The demolition of Babri Masjid in Ayodhya

In 1984, a movement was started by the Vishwa Hindu Parishad party to retrieve the Babri masjid site to build Ram temple. The right-wing Hindu nationalists rallied in the year 1992 which turned into a riot. The riot led to the demolition of the Babri Masjid. Under the governmental orders, no one was permitted to enter the site ranging up to 200 yards and the gates were locked for the outsiders. However, Hindu pilgrims began entering the temple site from the side door to worship their deity.

In the year 2003, the Archaeological Survey of India (ASI) started an excavation in the mosque site to ensure whether it was built on the temple ruins or not. The excavation uncovered many pillar bases that indicated ruins of Hindu temple below the demolished mosque. Along with the Hindus, the Jains and the Buddhists representatives claimed that temples belonging to their culture were also excavated at the site.

What happened in Ayodhya bomb blast incident in Babri Masjid?

In the year 2005, 5 terrorists attacked the site where the makeshift Ram Lalla (Rama as an infant) temple was going to be constructed. All the five were killed in the gunfight with the security including one civilian who died during a bomb blast.

The High Court’s verdict to construct Ram temple in Ayodhya

On 30th September 2010, the High Court in Allahabad stated that one-third of the disputed land will be allotted to Sunni Muslim Central Board, another one-third to the Nirmohi Akhara and the rest to the Hindu party to construct the temple for the Ram Lalla. The court decided that the region where the idols of Rama were found will be given to the Hindu party and the rest of the land will be equally divided among the three representative parties.

The final judgement pronounced on 9th of November 2019 by five Judges was passed on the behalf of the Hindus. The court asked the government to hand over the land to construct the Hindu temple and form a trust which will look after the temple construction. The court also ordered to allot massive 5 acres of land to the Sunni board where they can construct Masjid.

What does the ASI Report say on excavations made on the lands of Ayodhya?

According to the voluminous report submitted by the Archaeological Survey of India in the year 2003, the massive structure of the demolished Babri mosque lay upon the temple ruins. The survey claimed that the walls and pillars of the demolished Masjid resemble temple-like structures. Though the claims made were disputed by a few members of the group and hence it did not bring any one-sided result. Let’s have a look at what ASI found from the excavations made of the demolished mosque and temple site.

Facts about New Ram Mandir that will be built in Ayodhya

Although a separate trial concerning the Babri mosque is continued in the special court of Lucknow, the earth-moving machines were deployed for the purpose of levelling of the site on May 11 2020.  This 16th-century mosque which stood still on the Ram Janmabhoomi in Ayodhya was demolished in the place of which Ram temple will be constructed. Below are a few facts associated with new Ram mandir that will be completed in 3 to 5 upcoming years.