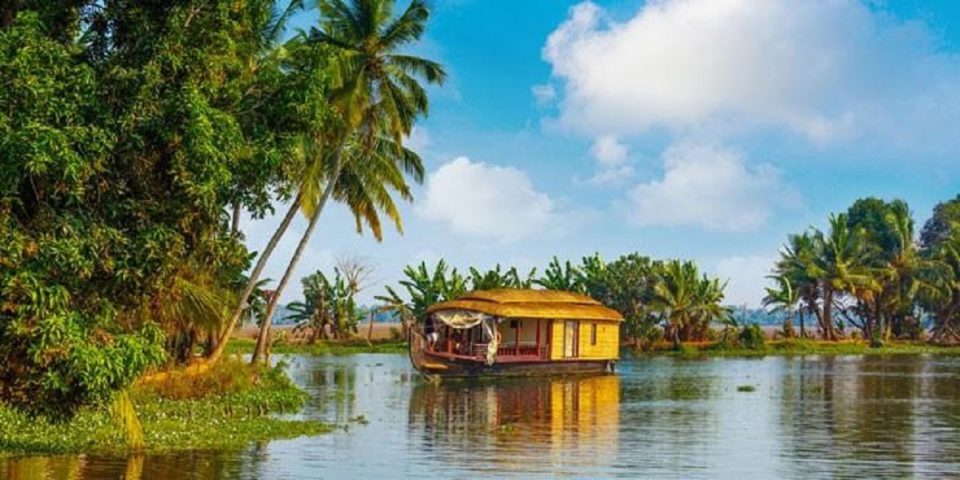 If you are planning a romantic honeymoon, a vacation with family or travelling solo, you will find Kerala exquisitely pleasant. Kerala is one of the favourite tourist places in India since it has beaches, wildlife, backwaters, hill stations and more to keep travellers occupied for days. Kerala is located at the southernmost tip of India and is surrounded by several rivers and the majestic Arabian Sea to the west. Check below some of the best places you must visit in Kerala to curate amazing memories.

Munnar is one of the charming mini hill stations in Kerala that is loved by honeymooners the most. Munnar lies 1600 meters towards the Western Ghats and is popular for lush green landscapes, tea estate and natural viewpoints. Here, you can get involved in various adventurous activities such as trekking, camping, boating and paragliding besides stargazing and birdwatching.

Kerala’s Periyar National Park is situated in the Thekkady region, a significant biodiversity region. This national park is well-protected and has many varieties of flora and fauna including majestic elephants, tigers and birds. The entire park is spread across 257 square miles while Periyar and Pamba rivers add to the forest beauty. You can explore the park via elephant ride, jeep safari or boat cruises that are arranged by the national park authorities.

Alleppey is located near Kochi acts as an interconnected path for canal backwater. This indeed attracts tourists from all over the globe for honeymoon or family vacation. You can enjoy the pleasant surrounding during your homestay or hire a houseboat for a change. The number of rejuvenating ayurvedic resorts are also on the rise where you can indulge in natural therapies and relax.

Kochi, also known as Cochin is the industrial capital and a commercial hub of Kerala while its trading history dates back to more than 600 years. This cosmopolitan town is surrounded by interconnected islands and can be reached by ferries. Many heritage accommodations and art galleries are available in the city apart from beaches, temples, crowded markets and more. Every year, Biennale Festival is celebrated in Kochi that attracts many visitors.

A mesmerizing coastal town that lies in the southern part of Kerala is unique for 15 meters tall cliff adjacent to the Arabian Sea. This place is also famous for its hippie culture, music, shacks on the cliff and Shri Narayana Guru samadhi. When in Varkala, you must visit the Jardana Swami Temple that is also called Dakshin Kashi. Many shops in the town have signboards written in Hebrew that sells beautiful mats, harem pants and oxidized jewellery which can be bought for souvenirs.

Wayanad is one of the best places to visit in Kerala due to its historical caves, waterfalls, homestays and luxurious resorts. Aside from seeing plentiful flora and fauna, you will also be able to explore spice plantations and prehistoric caves. You must visit the Wayanad wildlife reserve which is a part of the Nilgiris biosphere and homes a variety of animals such as leopards, elephants and bears. If you are taking a road trip from Bangalore, you can visit three adjacent parks; Bandipore, Mudumalai and Nagarhole.

Idukki can be defined as a nature’s lover paradise since more than half of the region is covered with dense forest. This hill resort is popular for tea factories, wildlife sanctuary and rubber plantations apart from an arch dam across the Kuravan Kurathi hill, India’s largest dam. Anamudi, India’s highest peak is also located here which attracts mountaineers every year.

On the banks of Lake Vembanad, Kumarakom is a town that lies around 16 km from Kottayam in Kerala and comprises a cluster of man-made islands in the lake. This is one of the best places to visit in Kerala due to paddy fields, local cuisine, a network of backwaters, fishing and traditional rice barrages in the houseboats. You may book yourself a luxurious bungalow or a comfortable resort during your stay as Kumarakom has all. For birdwatchers, there lies a beautiful bird sanctuary spread across 14 acres of land.

On the Idukki-Kottayam border, Vagamon is a popular tourist destination that has a pleasant climate all through the year. This place has meandering rivers, lush green hills, forest, waterfall and tea gardens which makes Vagamon one of the best places to visit in Kerala. Vagamon is popular among adventure enthusiasts as well due to activities such as rock climbing, trekking and paragliding. Many bike riders participate in group riding across the hills to explore natural sites closely.

This is a religious site in Kerala which is visited by not less than 25 million tourists each year. The temple is located in the Pathanamthitta district, inside the Periyar Tiger Reserve on the banks of the Pampa River. The famous Ayyapa temple is also called Dharma Shasta who was believed to be the son of Shiva and Mohini, Lord Vishnu as female incarnation.

Kollam, located Seventy kilometres from Thiruvananthapuram in Kerala, is a business hub and the heart of India’s cashew industry. Kollam, which dates back to the 9th century used to be a major spice trade route. It is one of the oldest ports in the Arabian Sea, located on the southern coast, and has been visited by famous merchants, pastors, and explorers such as Vasco da Gama, Marco Polo, Ibn Battuta, and others.

Kozhikode, historically known as Calicut, is a small city in Kerala. This was the capital of Malabar all through the Zamorin era 500 years ago and is known for its millennia of cotton and spice commerce with Jews, Arabs, Phoenicians, and Chinese. The picturesque backdrop of the tranquil Arabian Sea on the west and the majestic peaks of the Wayanad highlands on the east combine to make Kozhikode a popular tourist destination along with placid beaches, lush green landscape, and ancient landmarks.

Kovalam is a coastal town located 13 kilometres far from Thiruvananthapuram and has a huge lighthouse 30 meters in height. Some of the beaches that attract tourists include Hawa Beach and Samudra beach. The three popular beaches look like a crescent shape shallow water body with low tides. You can find wooden statues beautifully carved along with rich spices that can be taken back home.

The cultural capital of Kerala and a city of three Shiva temples, Thrissur is one of the best places to visit in Kerala renowned for Onam and Pooram festivals. The festivals celebrated in the Town attract many tourists every year apart from famous temples like Vadakkumnathan Kshetram temple.

One of the offbeat places to visit in Kerala is Poovar which is situated around 25 kilometres from Thiruvananthapuram. This place is bordered by the Nayyar River and majestic Arabian sea and is more commonly called the fishing village. You can hire a boat and ride during sunset to explore the mangrove forest. Enjoy swimming at the Poovar beach that can be accessed by boat ride only.

Palakkad, also known as Palghat is located near the low pass in the Western Ghat mountains. Palakkad is popular for its paddy fields, Tipu Sultan Fort ruins and an amusement park is known as Fantasy Park. Other locations you can visit here include Silent Valley National Park, Palakkad Fort, Jain temple, Walayar Dam and Pothundy Dam amongst others.

Trivandrum or Thiruvananthapuram is the capital city of Kerala which is a deeply rooted heritage and colonial site. The city is built upon the seven hills and has urban charm, several historical places and beaches named Varkala and Kovalam. The famous Padmanabhaswamy Temple is a must-visit site in the city along with Pazhavangadi Ganapathy Temple, Attukal Bhagawati temple Karikkakom Chamundi Devi Temple, and Aazhimala Siva Temple.

Devikulam is a pristine hill station in Kerala situated at an altitude of 180 kms. This place is popular for Sita Devi Lake, waterfalls, tea gardens, rolling hills and spice gardens. Goddess Sita is believed to have bathed in Sita Devi Lake and so this place holds religious significance. Apart from it, you will find lush green landscapes and beautiful waterfalls in the region where you can enjoy activities such as picnicking and strolling.

Kannur, located on Kerala’s Malabar Coast and immersed in unique native art forms such as Theyyam, retains a colonial atmosphere. The ancient footsteps of the Dutch, Portuguese, British, and Mysore Sultanate are still ingrained in the town which can be seen throughout.  In Kannur, you can explore Portuguese history at St. Angelo’s Fort or stroll along the lighthouse beach in the evening.

Kasargod is a tiny seaside town in Kerala’s Northern Part that presents a lovely combination of many cultures, history, and natural richness. The town is beautiful and serene from every angle, thanks to its stately monuments, steep hills, lovely backwaters, and immaculate beaches. Kasaragod can be called a family-friendly town due to the thriving coir and handloom industry which is worth a visit along with other tourist destinations.

Kottayam, an old town on a mountaintop surrounded on the east by the western ghats and on the west by the exhilarating Vembanad Lake, is a fascinating location. It is a renowned town that has accomplished 100 per cent literacy in India and is home to many publishing businesses and print media. The city is also a major economic centre for spices and crops, particularly rubber. Aside from its considerable economic importance, Kottayam is surrounded by a multitude of historic and intriguing temples, hypnotic terrain, and beautiful fields that will entice you to return.

Thekkady is one of the best places to visit in Kerala since it is home to the country’s largest Tiger Reserve, Periyar. In addition to several resorts near the park, an early boat safari is a must to see wild elephants, wild boars, different types of birds, and so on. Periyar National Park, a popular tourist destination, is one location where you may go bamboo rafting in the watershed region of the Mullaiperiyar Dam. Travellers can also go on a night walk in the Periyar forest.

How to Deal With Mood Swings During Pregnancy?

What Is Love Bombing? How to Deal With Love Bombards?