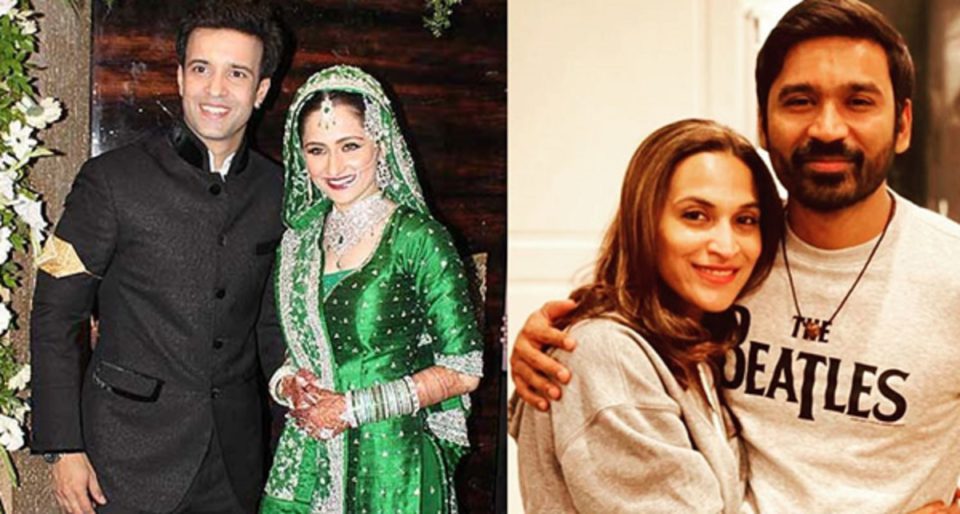 Over the years, we have all witnessed numerous successful B-Town weddings and separations. Blaming the dark side of glamour is viable, however, miscommunication, infidelity and compatibility issues have destroyed Bollywood celebrities’ marriage the most. Since the past few years, the number has increased rapidly as many have called quits and chosen separate ways. Read below to find some of the Bollywood celebrity divorces that shocked the world and made headlines for quite a long time besides breaking the hearts of millions of fans.

One of the Bollywood couples, Kishore Kumar and Yogita Bali were in the headlines for a long time post their marriage as well their divorce. Ruma Guha Thakurta and actress Madhubala were the previous wives of this legendary actor-singer. In 1976, Kishore Kumar married Yogita but got separated only after two years. It is believed that Yogita fell in love with Mithun Chakraborty and henceforth, got married to him in 1979. Kishore Kumar too got married in 1980 to Leena Chandravarkar.

The Family Court in Mumbai confirmed the separation between Farhan Akhtar and Adhuna Bhabani after they wanted a divorce on October 19, 2016. The couple had wed in 2000, asked for a divorce based on mutual agreement. According to sources, Adhuna will retain custody of their two daughters Shakya and Akira, while Farhan will have access to his children when he seeks.

Karan Singh Grover is a popular small-and-big screen artist who got divorced in 2016 to marry Bipasha Basu. They had fallen in love during their show ‘Dil Mil Gaye’ and tied a knot in 2012. When Karan started dating Bipasha, the two got separated after an ugly fight.

When the news of Arjun and Mehr flashed in news, the entire nation got shocked. Arjun said, “After a 20-year-long beautiful journey filled with love and beautiful memories, we would like to share, that all journeys have different paths. We feel that it is time for us to move on to different destinations henceforth”. The couple has two lovely daughters named Myra and Mahikaa.

Kalki and Anurag Kashyap got married in 2011 and got separated just two years later in 2013. When Kareena Kapoor hosted ‘What Women Want’, Kalki stated that her marriage did not work out as expected majorly because of the age gap and busy schedules. Moreover, they both had different aspirations and lifestyles.

Dia Mirza got separated from her husband after 5 years of marriage in 2019. She claimed about behavioural changes in humans, “You are moving in circles where people are educated but they still feel a sense of sadness. There’s definitely a sense of empathy as well. So, the gaze is not necessarily critical, it’s empathetic, and sometimes even pitiful. It’s also sometimes awe and admiration”.

In a sad turn of events, Bollywood actor Dhanush has parted ways with his wife Aishwarya, child of South superstar Rajnikanth. The pair divorced after 18 years of marriage. They have two children and had met through their parents.

On February 14, 1999, Rhea Pillai and Sanjay Dutt married. Sanjay was formerly married to actress Richa Sharma, who divorced him following the birth of their daughter Trishala and died of cancer. Rhea supported Sanjay at the most difficult time of his life, including the Bombay Blast case. Their romance, however, did not continue long, owing to Dutt’s Casanova tendencies. It is also claimed that their breakup was prompted by Sanjay’s hectic work schedule and Rhea’s friendship with tennis player Leander Peas.

Yet another Bollywood celebrity divorce that shocked the nation is Amir-Kiran Rao’s pair. After spending 15 years together with a surrogate child named Azad Rao Khan, they separated recently. Their joint statement read, “In these 15 beautiful years together we have shared a lifetime of experiences, joy and laughter, and our relationship has only grown in trust, respect and love. Now we would like to begin a new chapter in our lives – no longer as husband and wife, but as co-parents and family for each other,”

Himesh Reshammiya, a popular singer and music director, separated from his wife Komal after 22 years of marriage. Himesh stated that they both respect each other and their families. For him, Komal will always be a part of his life and family.

A popular Bollywood couple who got separated and broke the hearts of millions of fans Arbaaz-Malaika’s pair. Together they have 19 years old son named Arhaan. Although the couple has not revealed the reason behind their separation. Malaika stated “I think all women should jump back into it with equal gusto. It’s not impossible. Swipe left, right, whatever it might be.”

Hrithik and Sussanne’s separation after 13 years of marriage not only shocked the country but the entire world. Sussanne declared about the separation and requested the media not to interfere in their private decisions.  She said, “I do not wish this news to disempower my fans and the people about the institution of marriage in any way. I am a firm believer in this institution and respect and honour it at the highest level.”

The Bollywood celebrity divorce that shocked us the most is Manisha and Samrat’s one. They choose to remain single long before they got divorced officially. The couple’s wedding ceremony had lasted for three days in 2010 but got separated in 2012. This Nepalese girl mentioned in a social media post “My husband has become my enemy. How much worst can it become for women?”.

Amir Ali and Sanjeeda separated after nine years of happily married life. They dated for a long time before getting married in 2012 yet declared divorce in 2020. Their separation was also in the headlines when the news about a daughter through surrogacy spread all over. The couple initially tried to live separately for 9 months before separating and in 2021, they have moved on to lead happy lives. Their daughter Ayra stays with her mother Sanjeeda.

Saif Ali Khan separation from Amrita Singh after 13 years of marriage was also a shock for the nation. Saif said in an interview, “Sometimes, having two parents together might not be the best thing for anyone. A nice, stable home is a wonderful environment, and that’s what you would like to share with your kids.”

Following marital trials and tribulations, the couple, who had been married for 13 years, filed for divorce. Chitrangada has been granted custody of their son, Zorawar, as a result of the divorce. The pair had a love marriage, and the actress was reported as stating during better times, “I have been madly and insanely in love only once. I married him. I keep having little crushes from time-to-time, but Jyoti is my soul mate.”