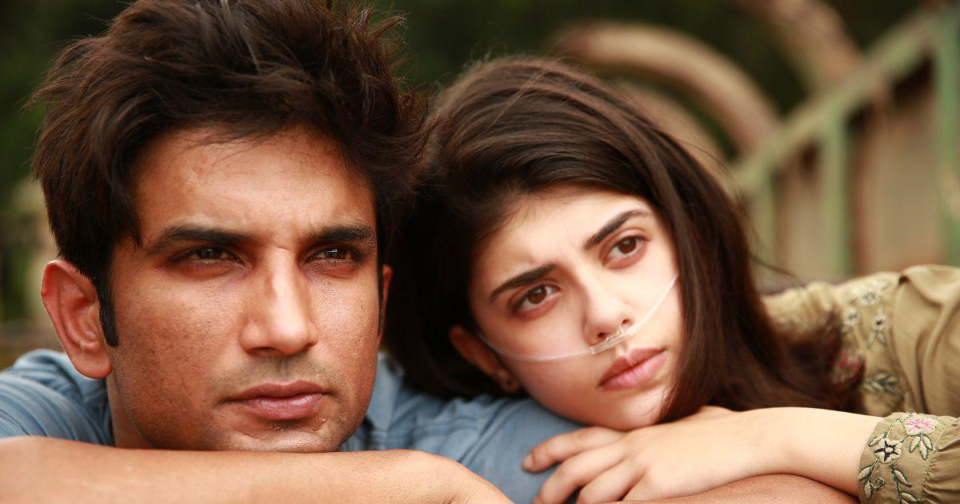 The moment I saw the film, it seemed that it existed for me! Usually, I would keep looking for film cast, songs and actors who deliver the dialogues. But the moment I was sitting right in front of my PC to watch the film online, my attention was totally captured by Sushant Singh Rajput. I cannot forget his facial expressions and every moment that the actor shared on-screen kept flashing back in my memory. It can be assumed that the cinematography of the film was destined to be so or the adequacy of the film industry has known inadequacy of human life.

Do you know Dil Bechara was adopted from a novel?

We all know that the movie stars none other than Sushant Singh Rajput and Sanjana Sangh. The duo finds their momentum of peace and purpose through dissimilarities between them. Dil Bechara storyline has been taken from one of the best-selling novels named, ‘The Fault in our Stars’. The movies reveal in front of the audience about the story of Kizie played by Sanghi and Manny played by Sushant Singh Rajput. The couple is young and suffers from cancer. The good which I liked is they fall in love and complemented each other but the sad part was they had very less time to celebrate their love!

The irony of the film is two people too small to die yet battles to live to begin a new beginning. The duo battles against the disease and show determination to start a new life which makes Dil Bechara all the more morbid ruled by laughter and romance. The divergence in the story due to the novel comes with a layered commentary about the nature of human life, its uncertainty and how unpredictable it can be. We get gifts and punishments together but the basic luxury which we all seek is the ultimate happiness. Similarly, the story based on the novel and directed by Mukesh Chhabra confirms the truth behind life and a good movie is much more than a good story.

Do you know Dil Bechara broke many of the previous records?

Dil Bechara got released on 24th July 2020 when the fans of Sushant Singh Rajput watched the movie and supported the actor’s last film. The movie was premiered in Disney Plus Hotstar. When I along with millions of others started watching the movie within the couple of minutes it got released, the IMDb rating jumped to 10. Though, with more than 21,000 votes, the current rating received by Dil Bechara is 9.8 Out of 10.

The movie has broken previous records and is been ranked on the top position in IMDb’s list of ‘Top Rated Indian Movie’ leaving behind Anbe Sivam of Kamal Hasan and R Madhavan.

The movie has been made free to watch for both subscribers and non-subscribers of Disney Plus Hotstar to give a tribute to the actor. Many viewers indeed are watching the movie not because of the story or entertainment but for other reasons such as tranquillity, probably looking out for purgation. It can also be said that Dil Bechara is about celebrating Sushant Singh Rajput’s victory and our love that made him come to Mumbai and become a shining star. The movie is about crores of fans who wish to adieu a final goodbye to their favourite actor. The film is more than bitter primetime and hostility seen in recent debates made on nepotism in Bollywood.

Sanjana is one of the confident characters in the movie who kept Kizie engaged and natural. Swastika and Saswata bring in-depth to their performance like good parents taking care of their daughter. Like any parent would be, Kizie’s parents to worry about their daughter and what will happen tomorrow.

One of the reasons why you must watch Dil Bechara is its music given by A R. Rahman himself. The name itself is strong enough to make us excited about movie songs. A R. Rahman has given music to the title track of the movie as well as songs such as Taare Gin, Khulke Jeene and Main Tumhara which are topping the music charts.

A tribute to Late Sushant by Dil Bechara team

The team Dil Bechara had recently played a beautiful and an emotional musical tribute to the actor lost by Bollywood. The musical team of the movie including Sunidhi Chauhan, Jonita Gandhi, Amitabh Bhattacharya, Mohit Chauhan and A R. Rahman performed for the actor remembering him. The soulful track was taken from the film and presented through a virtual concert.

The dramatic opening of Dil Bechara

Dil Bechara opens in the Jamshedpur city where Kizie describes her life to the audience. She has a funny voice, playful, lively, and sometimes revealing angriness in her. She meets Immanuel Rajkumar Junior, Manny when he tries to fool around with his acquaintance, JP or Sahil Vaid. Manny is flirting while Kizie shows no interest in him. They met again in the cancer counselling centre. Manny was previously inflicted with osteosarcoma and is in remission, JP suffers from eye cancer. Both the actors i.e. Manny and Kizie require support systems to live. Kizie suffers from thyroid cancer and accompanies a gas cylinder every time with her that keeps her alive. She calls it Pushpinder. Soon, both of them find a new support system i.e. one another.

From the initial opening sequence, I found that Dil Bechara is a smart and emotional movie. It outbreaks the Bollywood theme about ‘lived happily ever after’. It opens with a funeral sight, portraying a dramatic scene where someone is about to die. The movie’s dialogue is very simple and light, showing I do not desire to be strong but understandable.

Although the movie lacks pure romantic scenes, unlike many Bollywood movie, does, the movie displays the sensitive core of the novel beautifully. Particularly the song ‘Khulke Jeene Ka’ in which Manny and Kizie along with others visit Paris to meet with Kizzie’s favourite author. The duo is joined by her mother and together they enjoy the beautiful places of France. Both the actors loiter like tourists and indulges into some romantic poses in French romantic atmosphere. Furthermore, it seems like Sushant pays a tribute to Bollywood King Khan by displaying romantic postures and expressions. The director does not fail to include an intimate scene between them after Kizie’s mom leave both of them alone for the rest of the night. The young couple looked stunning romancing each other.

One flaw which I found in the movie was regarding stereotypical description made of Sushant Singh Rajput. As we can see that Sushant is a gifted performer and excels in roles which complements his diverse acting skills. Some of the movies where he excelled with his performance include Kai Po Che, MS Dhoni and Detective Byomkesh Bakshi. Sadly, many Bollywood directors forcefully try an actor to indulge in some generic roles like ‘big daddy of Bollywood’. Sushant in such kind of roles can be seen in movies like Rabta, Kedarnath and Drive which I think did not go well in the box office. This clearly shows that the actor could be put forcefully or compared to others but required to be fitted into a more relaxing and natural sequence. Similarly, the first half of the movie where Sushant plays assertive and overdramatic, the film does not look quite well. But, as the film goes more rhythmic and Sushant starts playing a vulnerable man, he shines.

As Sushant Singh Rajput has passed only six weeks back from the release of Dil Bechara, the movie centred to death has portrayed completely new meaning for us. There are many scenes in the film where disassociation of movie from real life becomes near impossible. Though, one will say that they felt lines getting blurred and would hardly make where the reel begins or end.

Where can you watch Dil Bechara?

As posted earlier, Disney Plus Hotstar has started streaming Dil Bechara for both, subscribers and non-subscribers. The President of The Walt Disney Company APAV and the chairman of Star & Disney India have decided that the movie will be available for free to pay tribute to Late Sushant Singh Rajput. If you are Sushant Singh Rajput fan, I am sure you will love the movie at its core. And, if you are not, you will still love the movie and many of its parts.