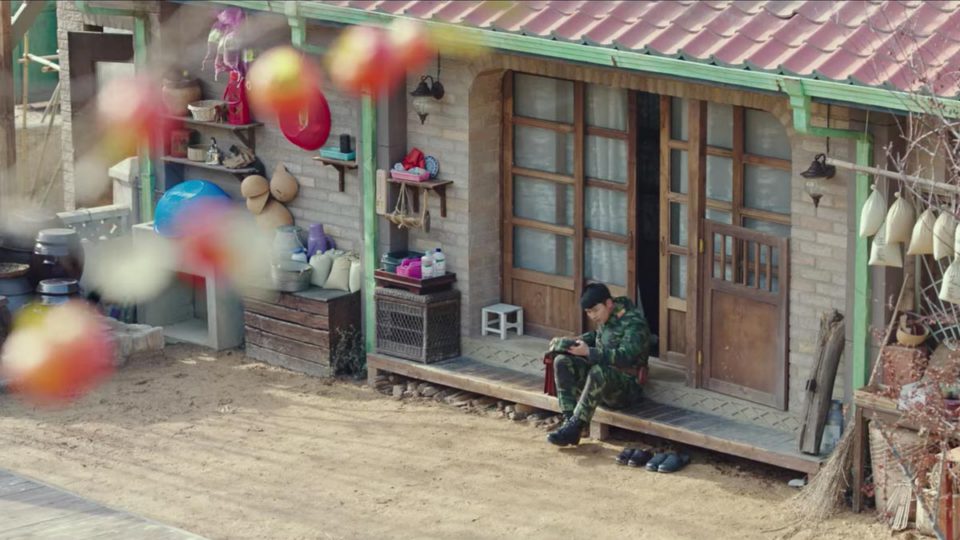 South Korea, a popular travel destination that is renowned for its food to culture and most importantly its beauty industry. But how can we forget the very famous K-pop culture and the Korean dramas, which is prevalent worldwide. Those dramas puff some of the most exquisite scenery and further fuelling the wanderlust.

Whether the stunning beaches or the panoramic parks or the astonishing school campus, you will find an abundance of places from the ‘K-drama Mania’ which will make you travel those places and explore the scenic beauty. Even if international travel is still off cards at some places, but planning beforehand for the next destination won’t harm anything. Even if you are not a fan of Korean dramas, some of the filming locations are so stunning, they just beg to be visited.

The place is located in Taean-gun (141-1, Janggok-ri, Gonam-myeon, Taean-gun, Chungcheongnam-do, to be exact) the North Korean Village from ‘Crash Landing On You (CLOY)’ is a film set that has recently opened to the public. The place is just three away from Seoul and the drama- Crash Landing On You (CLOY) endeavoured to recreate the North Korean village as meticulously as possible, with help from apostates living in South Korea. The design and detail of the fictitious village will give you an entrancing venture of what it’s like to live in one of the world’s most reticent countries.

Before the place was just a plain space at the back of a pension house before converting into a North Korean village. The place is near the countryside and one can notice a farm and a lake nearby.

One can take a bus from the Seoul bus terminal in Gangnam. From the Taean bus terminal, one may take a bus or a taxi going to Moseokwon pension house. From there, one must walk to get to the village.

This place is one of the most frivolous where in Hotel De Luna, this effervescent amusement park was where Man Wol met with Chan Sung’s ex-girlfriend to take her bracelet. The place was opened in 2019 which termed as an indoor amusement park in Paradise City, Korea’s first integrated resort. The park resembles a circus, but with bright lights and laboriously drenched colours that stand out in the “night”. You will experience exhilarating rides, spellbinding festivals and performances, and unforgettable fairytale-like attractions in the park. You will also catch a glimpse of outstanding performances with the park’s various shows like the Luna Carnival, Masquerade Show, and more.

You can take subway Line 2 to Daelim station, then use exit 5 and take the shuttle bus, which operates every hour from 8:30AM – 11:30AM

The place is remembered by the picturisation of K-drama- ‘What’s Wrong with Secretary Kim’. The hour-long cruise will take you on a slow, romantic ride down the Han River where you will also see the vibrant Seoul city at night. Even sometimes the cruise also features a stupendous firework display which will make your travel more exciting. The Han River has always been the centre of all K-drama scenes whether for good or for bad. Most of the K-drama writers have often used the Han River as a tool to drive the audience’s heart. The scenery is awesome that will take your breath away. Run to Nanji Hangang Park on the Han River to educe Do Bong Soon and Ahn Min Hyuk’s teeth-rottenly a adorable picnic date.

Fortunately for visitors to Seoul, there are many transportation options available in the city. Yeouido Hangang Park is connected to the Seoul Subway and can be reached by taking the Seoul Subway Line 5. With trains arriving almost every five minutes, it’s an efficient way to travel.

Hocheon Village is located in the Beoncheong-dong in Busan where the four main characters of ‘Fight For My Way lived’. The place is excellent for a romantic night view where you can walk all the harsh and long mountainside road with your loved ones relishing the scenery and boardwalks of the road. The best time to visit this place is at night as it looks awesome at that time. When you reach Hocheon Village, you’ll find a cute turquoise cafe and a museum that opened in tribute to the drama. The museum overlooks the piled apartments with hanging bottle lights and memorabilia from the show.

In the K-drama ‘Fight For My Way lived’, the key location is the unpretentious Namil Bar which was created by the four friends who use it as a secret place to escape.

From the café, the rooftop bar is around 5 minutes’ walk away and in reality, it doesn’t have the decorations just like the show but still offers the same great view from a wooden sunbed.

The place has many further hexes and will help you to remember many K-drama scenes which have been shot here. While visiting this place, you will surely appreciate the unique beauty and the charming scenario.

Jumunjin Beach is famous because of the epic scene from ‘The Goblin’ where Eun Tak inadvertently hails Kim Shin. This is a popular scene that fans love to recreate, down to the iconic red scarf and a simple flower bouquet in hand. The place is great for a day trip out of Seoul which is just two hours travel from the city. You can spend quality time lingering on the best and also enjoy the scrumptious food head to the nearby Haerang Seafood Restaurant that serves food at reasonable prices.

You can take a bus from Dong Seoul Bus Terminal to Gangneung, then take a 20-minute cab ride.

Well, if you a Korean drama fan then you must be knowing that no K-Drama is complete without an endearing theme park date that makes us wish to get that opportunity to experience the same thing without loved ones. Seoul Land is Korea’s first theme park where the ‘Strong Do Bong Soon’ drama series where Bong Soon and Min Hyuk went out for a perfect date. The park has around 40 rides and is one of the oldest parks. Many younger children and families go to the park to enjoy the rides. Many themes like the World Plaza, Adventure Land, Fantasy Land, Tomorrow Land and Samchulli Hill are fun to experience.

And people who don’t enjoy rides can take a long walk through the greenery and World Square which will give a glimpse of traditional architecture from all over the world.

You can take the subway to Seoul Grand Station and then leave via exit 2.

Hanhwa Aqua Planet Yeosu is the perfect place to explore the glimpses of the second largest aquarium in South Korea. If you remember then this is the place where ‘Legend of the Blue Sea’ was shot wherein the scene Joon Jae and Shim Cheong reunite and melt all our hearts. Apart from this particular scene, many other scenes were also shot at the aquarium. The aquarium features over 280 species over 4 floors and is said to be the second-largest aquarium in Seoul. you can also check the famous special mermaid performance.

You can a train from Yongsan Station to Yeosu Expo Station and then look for Bus stop L and then take bus 2 which will take you directly to the place after five stops.

As a K-drama fan, how can someone forget the romance between Yu Jin and Jun Sang in ‘Winter Sonata’ that stole all our hearts. This K-drama was one of the most popular shows and became very popular. It is also reported that after this show, Nami Island became the centre of attraction and also became very popular among the tourists. Even there is a statue of Yu Jun and Jun Sang on the island

You can take the train to Gapyeong Station where you can find the shuttle buses heading to the island.