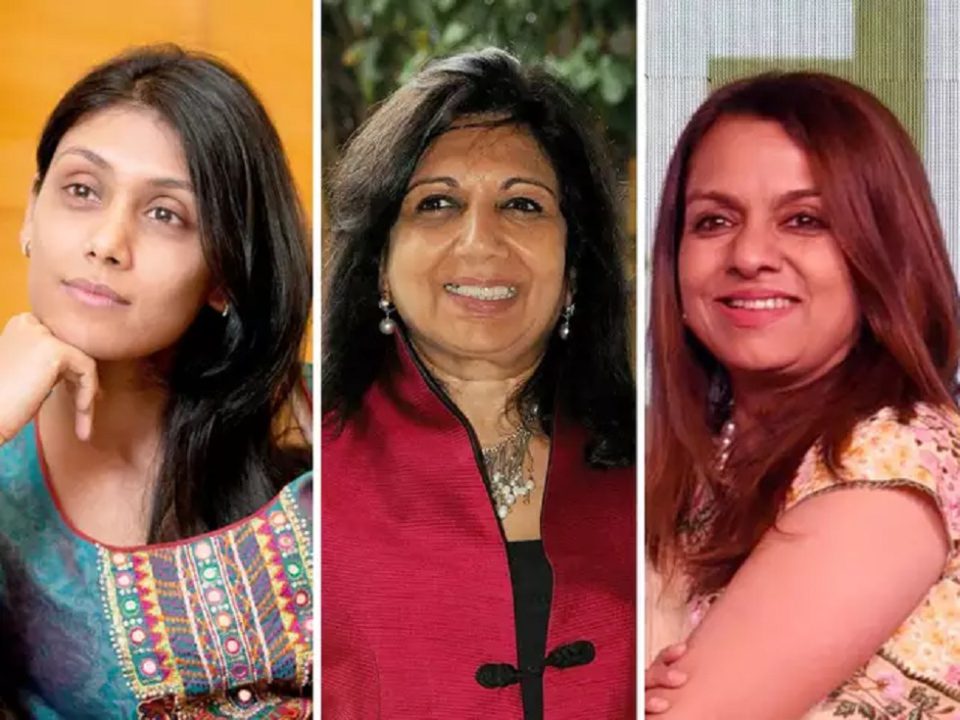 While the wave of women empowerment is in full swing, several women have left their footprints in the sand of history. Indian women, today, have been widely recognized as being bold and highly empowered, working hard to make an impression in the country and the world. It requires a good amount of hard work, perseverance, and persistence to achieve success and prosperity. And when you’re a female, the challenge increases. Whether one wants to believe it or not, females are still not treated equally with men in the business world, as they are elsewhere.

Defying the odds, these women listed below are self-made billionaires, and some of them have even made it to the HURUN India Rich List.

She is the nation’s wealthiest self-made female and the founder and executive chairperson of Biocon. This pharmaceutical firm was the first to obtain approval from the USFDA for two different biosimilar drugs for cancer treatments. Kiran Mazumdar-Shaw is ranked 34th on the 2020 HURUN India Rich List. As per Forbes, the Founder and Executive Chairperson of Biocon introduced 163 crores to her fortune this year, increasing her net worth from 17,480 crores in 2019 to 33,784 crores in 2020. This represents a 93.28 per cent increase, the highest, not only among females but also among India’s 100 wealthiest people in 2019.

Since 2008, Jayshree Ullal has served as the president and CEO of Arista Networks, a network systems company. Co-founders Andy Bechtolsheim and David Cheriton elected Ullal CEO and President of Arista Networks, a cloud company based in Santa Clara, CA, in October 2008. For her success at Arista Networks, Ullal was labelled by Forbes magazine as “one of the top five most influential people in the networking industry today.”

Jayshree was also one of the “World’s Best CEOs” by Barron in 2018 and one of the “Top 20 Business Persons” by Fortune in 2019. In2017, the publicly traded firm reported $1.6 billion in sales. Ullal holds about 5% of Arista, some of which is reserved for her two daughters, niece, and nephew. She was born in London and raised in India before becoming one of America’s richest female executives.

Shradha Agarwal is the co-founder and president of Outcome Health, a healthcare technology firm located in Chicago with a net worth of Rs 8,200 crore. Earlier this year, the business received $500 million in funding from Goldman Sachs and Google at a valuation of $5 billion. Shradha co-founded Outcome Health (formerly ContextMedia) in June 2006, a healthcare media agency that provides lifestyle education to 30 million patients nationwide every month. Shradha, as President of the rapidly expanding business, is focused on brand innovation, growing operations, and talent advancement.

When we speak of the wealthiest self-made women on the planet, we immediately think of entrepreneurs with brilliant ideas and strong business plans. However, we neglect to consider the executives. Radha Vembu, who ranks 99th on the HURUN India Rich List for2020, works as a product manager for Zoho Corporation. She has retained this role since joining the Indian software development firm. Vembu, alumni of industrial management from the prestigious IIT Madras, took over the business from her brother, who founded it in 1996 as AdventNet. According to the HURUN survey, Radha Vembu’s wealth has increased by 21% since last year.

Sheela Gautam was an Indian politician and entrepreneur whose net worth was Rs 2,800 crore. She was a member of the Bharatiya Janta Party and served in India’s 10th, 11th, 12th, and 13th Lok Sabhas. From June 1991 to May 2004, she led the Aligarh Lok Sabha constituency in Uttar Pradesh for 13 consecutive years. Sheela Gautam, born into a diplomatic family, founded Sheela Foam in 1971 and is known primarily for Sleepwell, a mattress brand. In 2016, the company with a turnover of $270 million went public. Rahul, her son, is presently the chairman and managing director of Sheela Foam.

With a net worth of Rs 2,600 crore, former PepsiCo CEO Indra Nooyi also made it to the list. During her 12-year term as CEO, Nooyi increased the Mountain Dew and Gatorade maker’s revenues to $63.5 billion, an increase of 80 per cent from when she began. She is also highly credited with restructuring Pepsi through strategic mergers and a move to healthy beverages over sugary sodas, such as juices and teas. She has regularly been ranked among the world’s top 100 most powerful women. She is a member of Amazon’s and the International Cricket Council’s boards of directors. Nooyi has been invited to join Philips’ board of directors in May 2021.

The first female to lead an Indian unicorn, a $1 billion startup, has given another remarkable title to her name. As per the Hurun India rich list 2017, Ambiga Subramanian, the former CEO of data analytics company Mu Sigma, is the youngest of India’s wealthiest self-made females. After Kiran Mazumdar-Shaw, chairwoman of biotechnology company Biocon, Vembu Radha, director at system software manufacturer Zoho, and Sheela Gautam, chairwoman emeritus of mattress-maker Sheela Foam, Subramanian ranked fourth with a net worth of more than Rs2,500 crore ($381 million).

As per Forbes, with the recent funding round for fashion and cosmetic seller Nykaa set to close by the end of this month, founding member Falguni Nayar is on track to be on the list of India’s billionaire female entrepreneurs after Biocon Chairperson Kiran Mazumdar Shaw. This year, the business is likely to go public with an IPO valued at about $3 billion. Thanks to the boom in online sales caused by Covid-19, Nykaa is projected to record a 40% increase in revenue this fiscal year, up from $247 million in March 2020.

Luthra introduced the idea of a beauty and wellness chain in India, with a net worth of Rs 1,300 crores. She established her first centre in New Delhi in1989, providing weight loss and also hair and skin services, and she now has 313 centres in 11 Asian, Middle Eastern, and East African countries. Her VLCC Personal Care company offers skin and hair care items in 72,000 stores throughout India.

The only female on the Hurun India 2020 Rich List of self-made Indian entrepreneurs is Devita Saraf, Chairman, and CEO of The Vu Group, an emerging new tech group. She is ranked 16th amongst the country’s most talented, ambitious entrepreneurial prospects. The path from a bootstrapped startup to a tech giant has not been without obstacles, and Devita aims to empower young ladies in becoming entrepreneurs and leaders. Besides being added to the IIFL Wealth and Hurun India lists, Devita has also been added to Fortune India’s Top 50 Most Powerful Women in India (2019) and GQ’s 50 Most Influential Indians (2019) lists.

Is Crowdfunding a Good Choice for Businesses That Need Money?