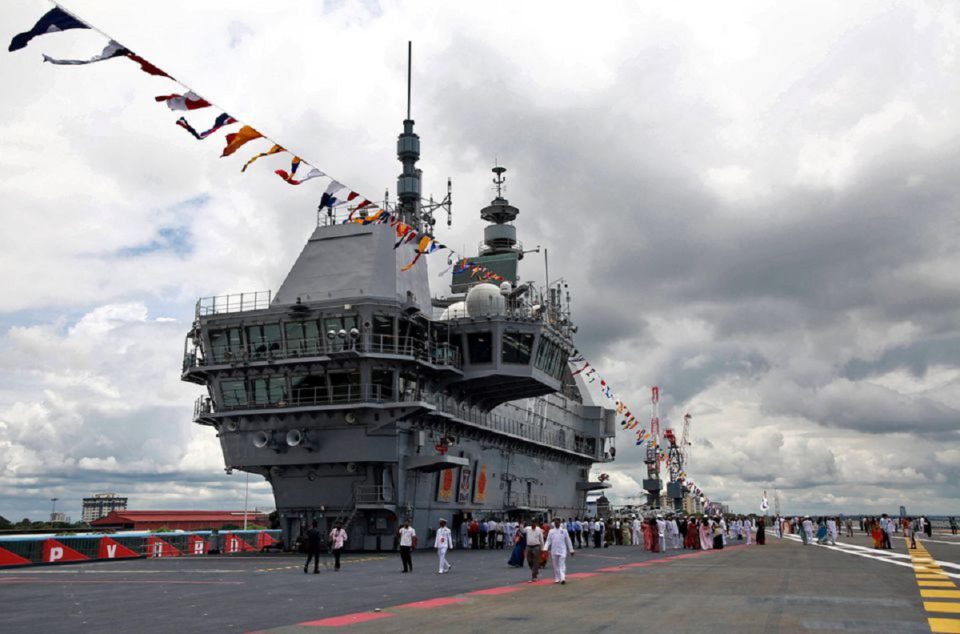 At Kochi’s Cochin Shipyard Limited, Prime Minister Narendra Modi on Friday commissioned the country’s first aircraft carrier, INS Vikrant. When PM Modi arrived for the INS Vikrant’s commissioning ceremony in Kerala, he was greeted by the Guard of Honour. During the ceremony, PM Modi unveiled the newly built Naval Ensign (Nishan), removing the old colonial ships running in the past. The Naval Ensigns are flags that formations or naval ships use to display nationality. The present Indian Naval Ensign has St. George’s Cross — a red cross with white background.

On one side of the cross, the Indian Flag was put when the country got freedom and replaced the Union Jack that was present in that place. September 2 has been marked by Modi as a “landmark day for India‘s efforts to become Aatmanirbhar in the defence sector”. This is because India has launched indigenously designed and built aircraft for the first time in history.

INS Vikrant’s history starts with the emergence of HMS Hercules which was an aircraft carrier employed by Britain’s Royal Navy in 1943. It was the time of the second world war and thus, shipbuilding was not completed successfully as the war ended soon. After the war, the US and UK navies wanted to sell the ships no longer needed by them. In 1957, the Indian government bought HMS Hercules. It was named INS Vikrant and was commissioned into the Indian Navy in 1961.

The name Vikrant has been taken from the Sanskrit term ‘Vikranta’ meaning brave and powerful. The ship joined the Indian navy from Bombay harbour on 3rd November 1961 and was received by Pandit Jawaharlal Nehru at Baller Pier. The ship later played a significant role during the liberation of the Bangladesh war in 1971.

The aircraft was kept in service for the next 26 years but was decommissioned on 31st January 1997. The Vikrant was then made a museum ship in Bombay’s harbour and was open to the public to marvel at the past. The ship was finally scrapped in 2014 due to high maintenance costs.

About the new INS Vikrant

INS or Indian Naval Ship Vikrant is been designed by the Indian Navy’s in-house Warship Design Bureau (WDB). It is built by Cochin Shipyard Limited and has state-of-the-art automation features. Most of the equipment used for making the ship is indigenous while many Indian companies and MSMEs contributed to making machines for the ships including BHEL, Kirloskar, BEL, GRSE, Larsen & Toubro, Wartsila India and so on. After the commissioning of INS Vikrant, India has two operational aircraft carriers that will boast maritime security of the country. The ship had been named Indigenous Aircraft carrier (IAC) after its predecessor and India’s first aircraft carrier that played an important role in the 1971 war.

The ship has a 262-meter-long carrier that has a full displacement of about 45,000 tonnes. This is comparatively much larger and more advanced than its predecessor. India now stands with major countries that have their own indigenously built aircraft carriers like China, Russia, America, France and the UK. The IAC Vikrant has 14 decks with 2,300 compartments which can easily carry more than 1500 sea soldiers. It can cater to their food needs due to the large kitchen on the ship.

INS Vikrant has a top speed of 28 knots and is propelled by four gas turbines with a combined 88 MW of power. The project, which has a total estimated cost of close to 20,000 crores, has been developed throughout three phases of the MoD and CSL contract, each of which was completed in May 2007, December 2014, and October 2019, respectively. The keel of the ship was laid in February 2009, and it was launched in August 2013.

During emergencies, the ship will be able to deploy an air wing that consists of 30 aircraft including MIG-29K, MH-60R multi-role helicopters, fighter jets and other navy aircraft. Moreover, the aircraft will be open to women soldiers and the navy as well. PM Modi said, “Now, the Indian Navy has decided to open all its branches for women. The restrictions that were there are now being removed. Just like there are no boundaries for strong waves, there will be no boundaries or restrictions for the daughters of India,”.

Dark Stores for Grocery Retailers in India: Advantages and Challenges