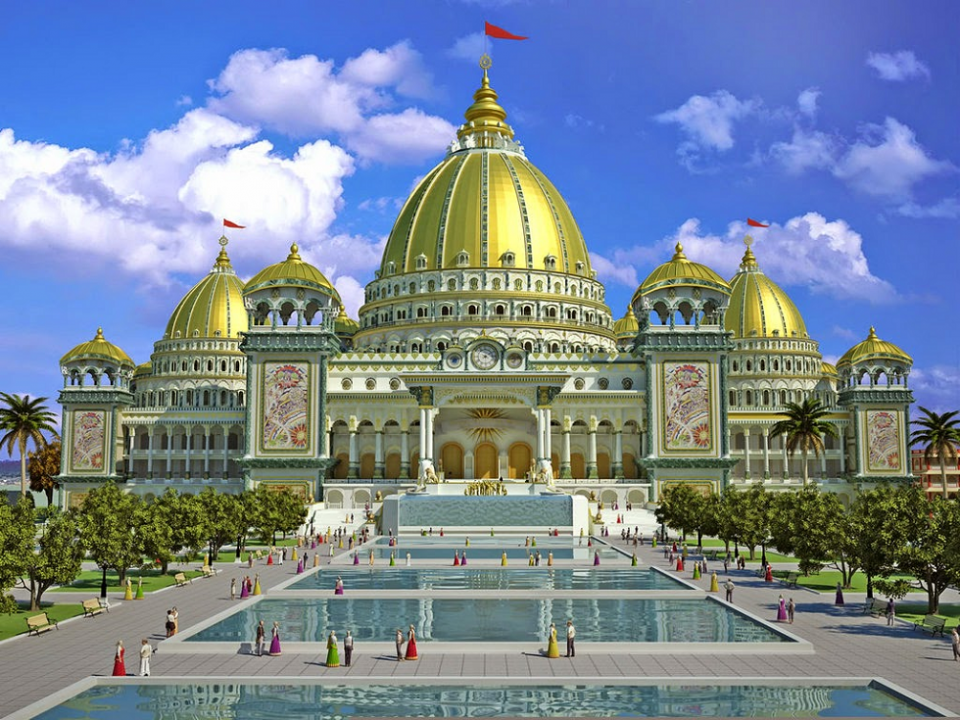 Spreading palpable spiritual aura, the ISKCON temple or the famous Sri Mayapur Chandordaya Temple is among many highly revered places of worship near Kolkata. What adds to the beauty of this religious site is that it is the first Krishna Temple which was built by the International Society for Krishna Consciousness (ISKCON). ISKCON Mayapur is not only known as one of the sacred sites owned by a popular religious organization but also serves as the headquarters of ISKCON. The idol of Krishna and Radha is surrounded by eight Gopis and an idol of Lord Narshimhadeva which are together worshipped primarily.

Srila Prabhupada image can be found in the ISKCON Temple. He was the founder of the temple and his image in mediating position is placed on the left-hand corner of the main temple room. The ISKCON temples are famous worldwide due to Hare Krishna Mahamantra and Prasadam. The dancing, grand celebrations and influential books are also popular worldwide besides being appreciated by the various open-minded crowd. Although ISKCON Mayapur is highly applauded and honoured, there are few facts which are not known to the world. This unknown axioms and fog of mystery will be removed in this blog by listing facts about ISKCON Mayapur.

Origins and discovery of the original site of ISKCON Mayapur

During the last century, the great spiritual leader, Thakura Bhaktivinoda tried vigorously to restore the lost glory of Sridhama Mayapur. While serving as a Government Magistrate, he requested the government to transfer him to Mayapur to be near a holy spot of Sri Navadvipa. When his request was not fulfilled, he decided to resign but then, Sri Chaitanya Mahaprabhu appeared in his dreams and government too granted a transfer. Since then, Thakura Bhaktivinoda started spending every spare time in visiting Navadvipa, a small town located at the West Bank of Bhagirathi River. Some people during that time insisted that Navadvipa was a site where Lord Krishna had appeared whereas many others say that the actual site is now under the river Ganges.

The building of the ISKCON Mayapur Temple

After discovering the site, Thakura Bhaktivinoda began working to build the temple. He established a campaign to collect funds throughout Bengal. With the help of special references, he marked holy scriptures along with transcendental realisations and located different places where the Lord spent his pastimes. Srila Bhaktivinoda took the residence on the Godruma island across the river from where he could see the site where Lord had appeared. The house constructed by him is known as Srila Sivananda-Sukhada-Kunja. Slowly, he started preaching Srila Chaitanya Mahaprabhu messages. His mission to develop Sridham Mayapur and preach his lord’s lessons was later taken by his son Srila Bhaktisiddhanta Sarasvati Thakura. He spread the messages of the lord all over India and established sixty-four mathas or centres. Srila Bhaktisiddhanta developed Sridhama Mayapur and constructed a huge temple at the site of Lord Chaitanya appearance.

It is said that Srila Bhaktivinoda predicted that one day people all over the world will visit there and the city of Mayapur will be full of Lord Chaitanya devotees. If someone goes to his house even today, he/she will feel being in front of Srila Bhaktivinoda and how his prediction transformed into reality in the name of ISKCON Mayapur or Chandrodaya Mandira. While explaining about the ISKCON Mayapur centre, Srila Prabhudeva once said that Chandra means Lord Chaitanya who is like moon and Udaya means the rising one. So, Mayapur Candrodaya means ‘Rising of Lord Chaitanya’. When the ISKCON project was completed in Mayapur, the prediction made by Thakura Bhaktivinoda was also fulfilled.

ISKCON Mayapur can be reached with the help of a vessel, or a boat. People can choose to travel by bus or train too. There are many travelling agencies available at nearby places who takes pilgrims to the ISKCON Mayapur temple via bus on prior bookings. ISKCON Kolkata operates bus service regularly from Kolkata to Mayapur. Many train services are also available from Krishnanagar, Nadia which runs from Sealdah station. Then you need to make further travelling of 18 km by a cycle or an auto-rickshaw to Mayapur. While visiting the temple, you can see headquarters of ISKCON and the long stream of devotees dressed in saffron-coloured dress chanting Hare Krishna mantra. The nearest airport is Netaji Subhash Chandra Bose in Kolkata, around 123 km away.

Places of attraction in ISKCON Mayapur

Chandrodaya Temple– Chandrodaya mandir is another must to see places in Mayapur. The main temple has three altars, Radha Krishna, Pancha Tattva and Lord Narasimha Deva. Sri Radha Madhava is the main shrine and is accompanied by Astha or eight friends or Gopis along with Gauranga Mahaprabhu and Giri Govardhana. Lord Narshimhadeva is placed in the centre of the temple and is called as Sthanu-Nrishimha. ISKCON Mayapur is the only temple where Narshimhadeva is worshipped. With red eyes and bended knees, he seems ready to protect his devotees from evils. The idol of Narshimhadeva was installed in 1986. Next to the main altar is Sri Pancha Tatva Mandir. In 2004, the deities of Sri Chaitanya Mahaprabhu, Sri Advaita Acharya, Sri Srivasa Thakura, Sri Nityananda Prabhu and Sri Gadhadhara Pandita were installed.

Srila Prabhupada Bhajan Kutir– This place is located in the left-hand side of the main entrance where Srila Prabhudeva stayed from 1972-1976. As directed by Srila Prabhudeva, kirtan or bhajan is performed over there with continuous chants of holy mantras.

Gosala– Gosala of ISKCON Mayapur abodes more than 200 cows. These cows are taken care of by veterinary doctors and volunteers. The Gosala also sells dairy products derived from cows like Yogurt, Ghee and milk.

Gaudiya Vaishnava sanctuaries- The base camp or the headquarters of ISKCON was placed in Mayapur in the year 1970. There are many Gaudiya Vaishnava associations present in Mayapur such as The Gaudiya Math. The Mayapur town is intensely populated with Vaishnava religion people who follows customs like Brahma-Madhva-Gaudiya Sampradaya. Their sanctuaries are dedicated to Radha Krishna or Gaura-Nitai.

The Gaudiya Vaishnava circle around the various places of Lord Chaitanya past times in the nine islands known as Navadip. The circling or the parikrama takes place for 7 days and the event is known as Gaur Purnima festival. ISKCON devotees from all over the globe visit Mayapur to make parikrama on this auspicious day to celebrate Lord’s divine appearance.

On 13th February 2020, the 146th anniversary of Divine Appearance of Srila Bhaktisiddhanta Sarawati Prabhupada, ISKCON and TOVP staff will celebrate one more milestone event arranged towards the progress of the temple construction. The TOVP or Temple of the Vedic Planetarium will inaugurate a new pujari floor which will be the largest worldwide of its kind. It is 2.5 acres in size with more than 20 dedicated rooms to do Seva of deities under the close guidance of the head pujaris of ISKCON Mayapur, Janasivas and Pankajanghri Prabhus.

Things to do in Havelock Island, The Jewel of Andaman and Nicobar Islands