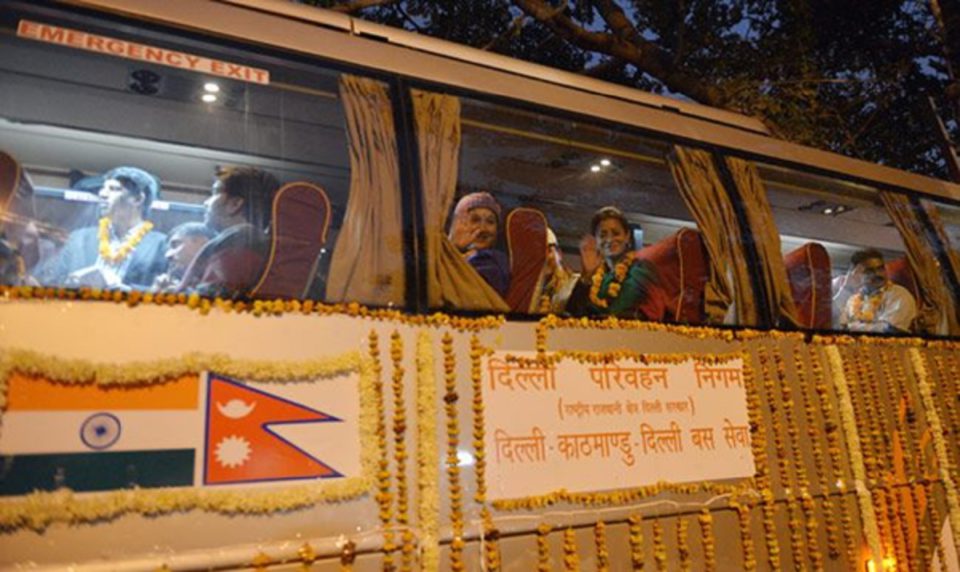 A partnership was formed between DTC and Skyline India (Motors) Private Limited for the smooth operation of the bus. It was notified publicly that, “The latest COVID-19 protocols/guidelines issued by the Ministry of Home Affairs (MHA) are to be followed in true spirit in all conditions,”. the warning stated. The transit system, which connects the major cities of India and Nepal, began operations in November 2014. The operation was halted on March 23, 2020, during the first wave of the pandemic, as per Economic Times Report.

The Delhi-Kathmandu bus service connects the capitals of India and Nepal, which are located in Delhi and Kathmandu, accordingly. The Delhi Transport Corporation (DTC) operates the service, which debuted in 2014. While the Delhi Transport Corporation (DTC), a state-run corporation, will operate the bus service from the Indian side, the Federation of Nepalese National Transport Entrepreneurs (FNNTE) will operate the service under the supervision of the Ministry of Physical Infrastructure and Transport (MoPIT).

This bus passes via the Sonauli border crossing, wherein customs inspections are performed. The 1,250-kilometer (780-mile) voyage takes 30 hours. This is now the DTC second international bus service, following the Delhi-Lahore route inaugurated by Atal Bihari Vajpayee on February 20, 1999. There are also proposals to launch comparable bus routes to all of India’s bordering nations.

When was Delhi to Kathmandu Bus Service launched?

Since its creation, the bus is regularly used to transport pilgrims and vacationers from both countries, as well as foreign representatives and regular citizens. Similarly, it gained appeal as an alternative to pricey flights and overcrowded train services. The bus service is critical to both countries’ trade and travel. Because both nations have extensive historical and cultural links, the start of the bus service strengthens relations with Nepal.  The economic viability of travelling by bus is one of the reasons why inter-country buses are becoming more popular. Travel businesses in Nepal and India are working to provide the finest bus service linking the two countries. The inter-border bus route systems and low-cost bus services serve to boost tourism and neighbourly connections in both countries.

What travellers must know?

According to a senior DTC official, it will be “necessary” for all passengers to carry a certificate of both doses of COVID-19 vaccination and a negative RT-PCR test report within 72 hours of the commencement of the tour. He stated that if the passenger does not present the required documentation, they would not be permitted to board the bus. The bus travels 1,167 kilometres between Delhi and Kathmandu, including stops in Firozabad, Mugling in Nepal, Faizabad, and Uttar Pradesh. Previously, the fare for the travel was 2,300 INR, but it has now been increased to approximately 2,800, according to a DTC official.

On Mondays, Wednesdays, and Fridays, the bus travels from Delhi to Kathmandu. The bus from Kathmandu to Delhi departs on Tuesdays, Thursdays, and Fridays. The buses will also make a stop in Sonauli (on the India-Nepal border) for customs clearance. People travelling between Delhi and Kathmandu are not permitted to depart or embark on the train except at designated stops.

The Maitri Bus Sewa was established as a sign of goodwill between India and Nepal, and the buses have regularly transported pilgrims, tourists, foreign representatives, and members of the general public from both countries. However, there has been no progress on DTC’s other international bus route between Delhi and Lahore, according to authorities. In 2019, the DTC halted bus service to Lahore. This decision was made after Pakistan discontinued the Delhi-Lahore bus route in the aftermath of India losing J&K’s special status as a result of the repeal of Article 370.

The Ten Biggest Winners in Sport Ever

Visit Parvati Valley to Unleash the Mysterious Story Behind Lord Shiva-The Destroyer and his Beloved Parvati!

Tamil Nadu – A Mixture of Cultural And Coastal