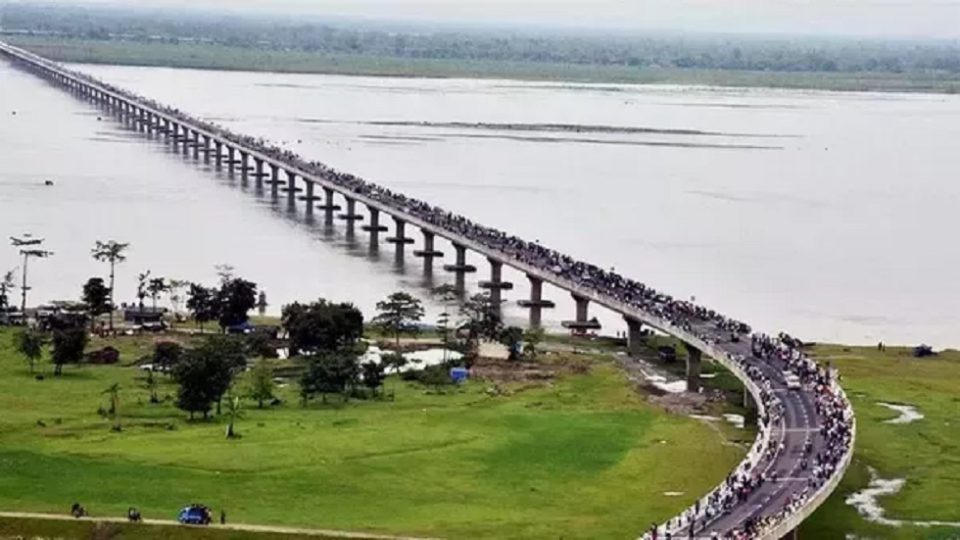 India is a land of many rivers and water bodies. The rivers play a crucial role in supporting the country’s large population. Not only do they provide the water for irrigation purposes, they also provide water for regular usage in cities, towns and villages. As there are many rivers in India, there are also many bridges across the country. Some of the bridges are actually quite long. The longest bridge in India is the Dhola-Sadiya bridge in Assam. However, the 9.15 kms long bridge will soon be dwarfed by the proposed 19.3 kms long Assam Meghalaya bridge. The new bridge over the river Brahmaputra, which was recently commissioned by Prime Minister Narendra Modi is likely to be completed by the year 2026-27. The bridge, which will become the longest bridge in the country, will run between Dhubri in Assam and Phulbari in Meghalaya, located very close to the Bangladesh border. The new bridge was inaugurated within a year of the opening of the longest river bridge in India, Dhola-Sadiya, in the state of Assam. The Modi government has announced plans for an extended bridge. This bridge will also be over the river Brahmaputra. Coincidentally, this announcement was made by the Indian Government just before the world’s longest sea bridge opened between Hong Kong and the Chinese mainland. The new bridge, which will become the longest bridge in India, will be completed by the year 2026-27. The bridge will span a distance of 19.3 kms between Dhubri in Assam and Phulbari in Meghalaya. The new bridge will be more than twice as long as the current longest bridge in India, the Dhola-Sadiya bridge.

Currently, the people in Dhubri and Phulbari cross the river either in small boats or by vehicles that need to drive an extra 100 kms before climbing the Naranarayan bridge. According to an official of the Assam’s Public Works Department, four lanes have been proposed for the project. A detailed project report is being prepared by the Ministry of Road Transport and Highways through the National Highways and Industrial Development Corporation Limited (NICL) and an initial loan amount has been approved by the Japanese funding agency, JICA. While we wait for this super-bridge to finish building, let’s look at the current longest bridges in India.

Which is the Longest Bridge in India?

Dibang River Bridge, also known as the Sikang Bridge is the second longest bridge in India. Dibang River Bridge spans across the Dibang river in Arunachal Pradesh. It is 6.2 kms long. It is a strategically crucial bridge and it can allow the Indian Army quick access to the Chinese border in case the troops need to be mobilized for some emergency.

This famous bridge in Bihar was the longest bridge in India for a long time. The old and massive bridge spans across the river Ganga and connects Bihar’s capital Patna to the town of Hajipur. The Mahatma Gandhi Setu also serves as one of the tourist attractions in Bihar. The bridge was opened for usage in 1982 by the incumbent Prime Minister Indira Gandhi. Because of the heavy usage over the course of time, the bridge’s condition has deteriorated a lot over time. The Bihar Government keeps doing intermittent repair work to save this state heritage from collapsing.

Bandra Worli Sea Link or Rajiv Gandhi Sea Link is that the fourth longest bridge above water in India. It is definitely the most beautiful bridge built in India’s history. It’s also a tourist attraction in Mumbai. The Bandra Worli Sea Link connects Bandra and the Western Suburbs of Mumbai with Worli in South Mumbai. It is a cable stayed bridge with pre stressed concrete steel viaducts on either side. The 5.57 long bridge might also eventually become a part of the proposed Western Freeway.

One of the longest bridges in India, the Vembanad Rail Bridge is a railway bridge that connects Edappally and Vallarpadam in Kochi, Kerala. With a length of 4,620 metres, it’s the longest railway bridge in India. The railway line is dedicated solely for freight trains. The Vembanad Rail Bridge is also one of the most beautiful bridges in Kerala. This bridge allows only 15 trains to pass every day. Vembanad Lake is the largest lake in Kerala, and one of the biggest in India as well. It also hosts the Nehru Trophy Snake Boat race.

Yet another of the longest bridges in India is in Bihar. The Arrah Chhapra Bridge is additionally referred to as Veer Kunwar Singh Setu is a multi-span bridge across the Ganga river that connects the towns of Arrah and Chhapra in Bihar. Veer Kunwar Singh bridge was opened for public use on June 11th, 2017. The construction of the bridge slashed the distance between Arrah and Chapra from 130 kms to just 40 kms. The bridge, named after the legendary freedom fighter Kunwar Singh has reduced the distance between major Bihar districts such as Arrah, Aurangabad, Bhabhua, Siwan, Chhapra and Gopalganj.

Rounding up our list of the longest bridges in India, is the Godavari Fourth Bridge. This bridge is also known as Kovvur–Rajahmundry 4th Bridge. The bridge spans across the Godavari River in Rajahmundry, Andhra Pradesh. The bridge’s construction also cut down the road distance between two of India’s biggest metros, Kolkata and Chennai by over 150 kms. This dual bridge connects Kovvur in West Godavari district to Diwancheruvu Junction in Rajamahendravaram in East Godavari district via Katheru, Konthamuru, Palacherla areas in Rajamahendravaram City.

15 Useful Gifts for a Newly-wed Couple