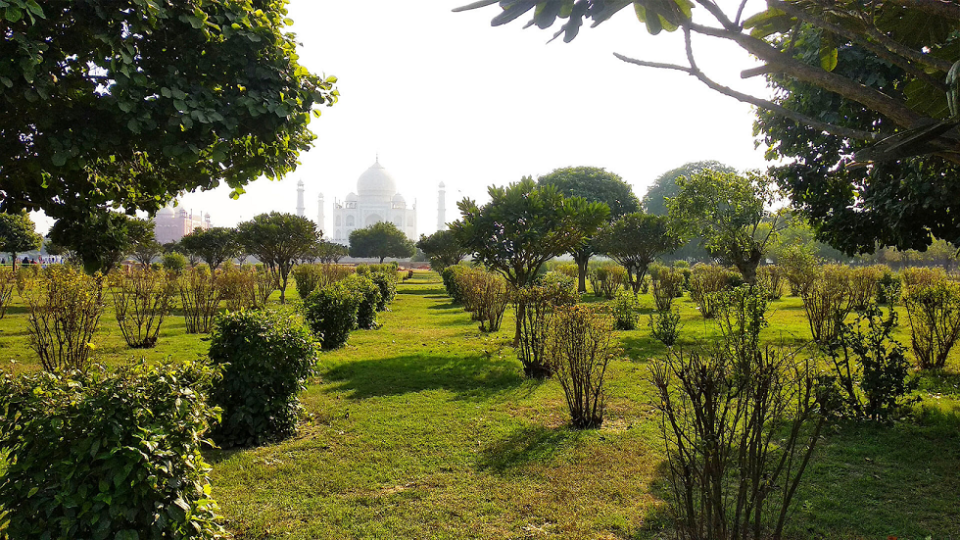 Mehtab Bagh In Agra, also known as the Moonlight Garden was built by Emperor Babur. The garden was built in early 1500 and is popularly known as the Moonlight Pleasure Garden. The garden is built in such a way that it aligns perfectly with the width of the Taj Mahal. This can be said because Emperor Babur must have identified this garden site as a perfect place from where he could admire the mausoleum.

Where Is Mehtab Bagh situated?

Mehtab Bagh lies very near to one of the seven wonders of the world, Taj Mahal and places itself in the Forest Colony of Nagla Devjit in Agra. People visiting Agra or the Taj Mahal never misses envisaging the glorious viewpoint of Mehtab Bagh which lies right in front of the Taj itself. To reach there, you can hire autos, cabs or rickshaws from any part of the city.

Mehtab Bagh is said to be originally designed like a Charbagh complex which resembles Persian-style architecture having four individual parts. Every part is divided with the help of beautiful white lanes where people can walk, contains huge water fountains in the pools that reflect nearby beauty and surrounded by a pavilion that has colourful tress. Due to some ill circumstances, in 1900 many flooding took place in this area and misusing the facility destroyed the charm of the garden and its architectural features. Slowing, the entire area turned out nothing but a massive piece of sandy land.

After the latest excavation and exploration, Mehtab Bagh has retained its lost glory. Though we cannot encounter the original Mehatb Bagh ever, what lays in its place is no lesser than what was originally built by Emperor Babur. As many as 80 species of flora and fauna including Neem, Hibiscus, Ashoka and fruit-bearing trees have been planted in the garden. Planting of tress in huge numbers typically reflects Mughal style gardens which make Mehtab Bagh an ideal place to visit besides Taj Mahal in Agra.

The garden has a stepped waterfall which is located at the other side of the Mehtab Bagh to feed the pond. The garden has four towers standing at the four corners of the Bagh. Out of the four towers, only one tower can be seen today that is located in the south-east side of the Mehtab Bagh. A huge water tank is placed on the eastern side which has several water channels covering the entire garden area. The water channels ensure that the garden is served with required water throughout the year.

The garden also has two structures that have been ruined completely and are assumed to be the pillars of the Mehtab Bagh pavilion that could not survive floods and excavations. One significant structure in the garden is the shrine of a Dalit placed at the entrance. Overall, the Mehtab Bagh is decorated with many nurseries of shrubs and small plants along with huge trees that add beauty to the man-made statues, temples, shrines and others.

The width of the Mehtab Bagh is equivalent to the Taj Mahal, but it was not actually built for complimenting Taj Mahal. Rather, the garden was built several years back and much before Taj Mahal was built.  Mehtab Bagh garden was the last of the gardens built by the Mughals beside the Yamuna. The first garden was Ram Bagh. Legends say that in the 17th century, a French traveller named Jean Baptise Tavernier mentioned that Shah Jahan wanted to build a Black Taj Mahal for himself which would look similar to the Taj mahal. However, this could not be made since he was imprisoned by Aurangzeb.

This myth was further elaborated by a British archaeologist in the year 1871 while he discovered the remnants of the old pond. A.C.L. Caylleyle became the first one to discover the structural remnants in this site that was covered with lichen and moss. Later, the Mehtab Bagh was owned by Raja Man Singh Kacchawa of Amber, the owner of the land surrounding Taj Mahal at that time. Frequent floods and extraction of buildings by villagers and people living by ruined the garden completely. The remaining structural pieces in the garden were almost forgotten until recently when it got extracted by the Archaeological Survey of India (ASI).

When to visit Mehtab Bagh?

The restoration of Baby Taj Mahal and Mehtab Bagh

The restoration of two significant sites associated with the Mughal dynasty was carried by the ASI, Ministry of Culture and the World Monument Fund. The project was opened for the public in the year 2019. Other than Taj Mahal, the tomb of Itmad-ud-Daulah is considered as a significant creation and architectural marvel in Agra. The tomb was sanctioned by Empress Nur Jahan for her beloved father Mirza Ghiyas Beg in the year 1620. The tomb was built in a Mughal ‘Char Bagh’ style and consisted of four equally shaped gardens. The tomb sat in the middle of the char Bagh or the four gardens. The tomb resembles the original Taj mahal and hence is called “the baby Taj mahal” by the visitors.

Although Taj Mahal and the mausoleum of Itimad-ud-Daulah looks very similar to one another, the tomb of Itimad-ud-Daulah is said to be more delicate than Taj Mahal artistically. The tomb is made with marble lattice screens with fine carvings and sculptures on it. The baby Taj Mahal is said to be the first of many tombs built by the Mughals on the bank on river Yamuna. So, if you ever visit Agra, you must visit this mausoleum for sure to encounter one of the marvellous creations of the Mughals that glorifies Agra.

In between 1979-1980, excavations were conducted at this place to verify whether the site famed to be a place containing Black Taj Mahal is true or not. Further excavation in 1993-94 revealed that the site contains terracotta pipes, octagonal pond and some 25 fountains surrounding the pond. It was one of the historical findings as the site revealed some important information about the Mughals. Through this site, it was found that Mughals used the traditional system of carrying water from the river to the wells that fed the ponds through an underground network of a terracotta pipeline.

Spread over the 22 acres of land, Mehtab Bagh has flora and fauna like baby Taj mahal or Itimad-ud-Daulah. The garden is just 3 km away from the banks of river Yamuna and is said to be much quieter and serene than any other part of the city.

Mehtab Bagh is the last gardens out of the eleven popular gardens built by the Mughals alongside Yamuna river that distinguishes it from the other Mughal-style gardens.

This historic garden has beautiful fountains, sandstone and pond beside majestic structures which makes it an ideal place for picnics and outings in the weekends. Many romantic couples find peace in this garden amidst travellers envisaging iconic garden area and Taj Mahal.

The pond in the Mehtab Bagh reflects the glorious image of the Taj Mahal in it.

Many interesting trees and flower plants have been planted inside the garden.

Visitors can opt for a camel ride outside the garden area where many camel riders are readily available to give people a quick ride around the city.

Many shops can be seen on either side of the garden entrance from where you can buy a souvenir for your loved ones.

If you want to take a picture of Taj Mahal, Mehtab Bagh can prove to be an ideal place which is the reason many photography lovers choose Mehtab Bagh to click pictures of Taj Mahal and the garden from this place.

You can see a compound wall standing 289 metres in height that surrounds the entire garden area.

A small and beautiful shrine is placed at the park entrance which is followed by a pathway made of bricks.

Foundation of Black Taj Mahal can be found in Mehtab Bagh pond.

The distance between Taj Mahal and Mehtab Bagh is less than 7.5 miles.

The Archaeological Survey of India excavated Mehtab Bagh in the year 1994. The garden was a forgotten mystery that contained the story about Emperor Shah Jahan and how he wanted to build a Black Taj Mahal on the grain sand.

Although the archaeologist believed that they might find the buried body of the emperor himself at Mehtab Bagh, they found Char Bagh complex which itself is an important part of the white monument i.e. the Taj Mahal.

History of Skydiving and Some Weird Fun Facts Regarding the Sport.

Pondicherry Travel Guide: Awesome Things to do in Pondicherry