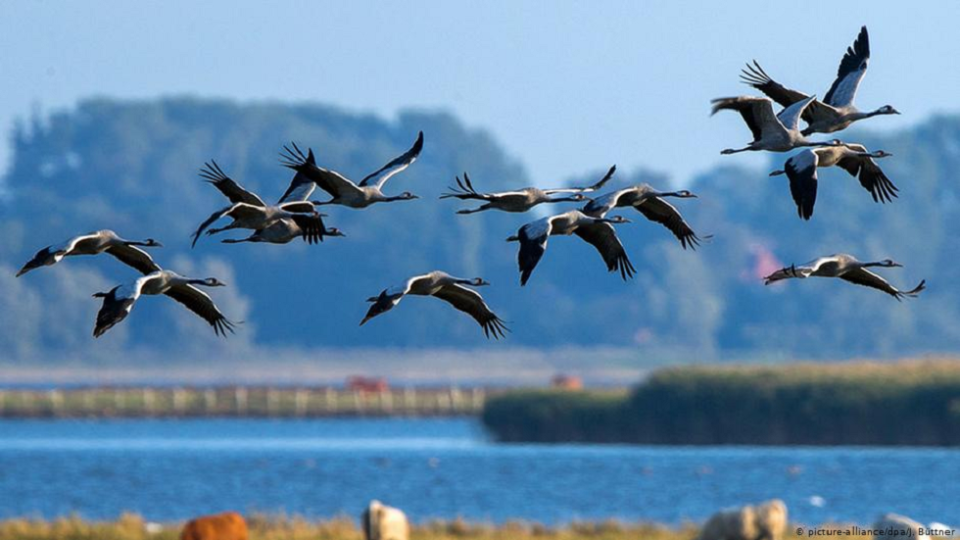 India is a nation blessed with geographical diversity that fosters wildlife immensely. While a large number of animals walk in the lands of India, many impressive and beautiful birds soar its skies seasonally. The nation not only extends its famed hospitality to the migratory birds but hosts them excellently by providing protection to the birds and making a close inspection of their seasonal appearance. Numerous migratory birds visit India each year either form the Southern heat or from Northern cold since India provides them with the perfect escape from extreme heat and cold as well.

Avian migration is one of the natural phenomenon’s which makes many migratory birds fly thousands of kilometres to find best ecological condition and desired habitat for feeding and nesting. When conditions at their breeding place become unfavourable, the birds fly to those areas where conditions are better for their survival.

Many migratory patterns have been discovered over the years. Some of the migratory birds that visit India belongs to northern regions making them fly towards southern wintering grounds. Though some of the birds breeding in a few parts of Africa migrate to northern winter grounds and horizontally to enjoy a mild coastal climatic region in India during winter. Other migratory birds would prefer residing on lowlands in winter months and move in the mountainous regions for summer seasons.

Migratory birds often fly thousands of kilometres and have perfect navigation expertise with pinpoint accuracy. Some species can even find polarised light that is used to navigate during night time. The Red Knot bird travels the longest migration route among all migratory birds. They travel 16,000 kilometres twice every year. They breed in Siberia and the West coast of Africa and travels to the tip of South Africa twice every year.

Migration Journey: From Arctic Tundra Region of Siberia and Russia to India

Although Siberian Cranes are an endangered species, they look very distinctive. They nest in Siberia throughout the year and undergo a journey around 4,000 miles each year to India. The reason behind these migratory birds visit to India is to escape extreme cold weather and scarcity of food in Siberian regions. The birds can be traced at two major places including Kaladeo Ghana National Park, and Bharatpur National park. The site has been declared as one of the World Heritage sites since Siberian Crane traverses almost half of the world to reach it.

In the recent past, things have changed dramatically. Once visiting regularly, these birds have started making a sporadic appearance since the past few decades. Overpopulation, hunting and extreme weather conditions can be attributed in the stoppage of Siberian Cranes visit to India. Although the Crane Foundation is doing everything it can to reroute the birds and make them visit India like the past, the chances look very fragile.

Migration Journey: From Russia or Iceland to North India

Black-tailed Godwit is one of the migratory birds that visit India to spend their winters. They breed, raise their young and eat in Russia or Iceland. Though winters in these areas are not too kind for the birds so they migrate south lowland and wet grasslands in India. Black-tailed Godwit prefers the muck and the mud. They can be seen in the inland pools, marshy lands and beside lakes and feed mostly on frogspawn and insects. They like to spend 4-5 months in India.

Migration Journey: From Arctic Tundra to the Himalaya

Ruffs are the migratory birds that visit India from the Arctic Tundra Region to spend the summers for breeding and rearing chicks. The winter in the Arctic Tundra is problematic and freezes them like a stone. This propels the birds to move towards the Southern parts and India is one of the most preferable destinations for them. However, once their breeding season approaches, they fly back to the Tundra and repeat the cycle all over again.

Flamingo of Sewri is one of the flamingo bird’s species mostly found in Mumbai city and migrate within the country itself. But the flock of Greater Flamingo starts coming from the Flamingo City to the Rann of Kutch’s Anda Bet island. This is the largest nesting ground of flamingos in India. Around 10 lakh flamingos gathered in the island in 2011.

Flamingo is one of the migratory birds that visit India and are quite fussy. They breed in ideal weather conditions only. The availability of food and water are taken into account by the birds before the pink swarm settle down. However, after 2011, flamingos have disappeared dramatically making fewer arrivals. Although they breed once in three years, their sudden disappearance has caused concern among the experts. One reason can be occasional electrocute when flamingos sit in the salt marsh of Rann of Kutch where they face 1000-watt electric cables in the breeding areas.

Migration Journey: From Northern Asia and Europe to Indian Himalayas

Northern Shoveler resides in Northern Asia and European countries. They belong to the species of duck and like to spend time in southern Europe, Indian subcontinent, Malay Archipelago and Africa during summers. A large number of the birds spends their winters in India making a journey to Himalaya. They take a break at the wetlands of the southern Himalaya before continuing their journey towards the south in India.

Gadwall is also known as Bhaur, Myla and Beykhur. The tiny brown ducks’ visits India during the winter season, flying miles from their home in North America and Europe. The birds prefer freshwater reedy marshes, low water bodies like jheels in India. For quick availability of vegetation and food, Gadwall migrates to India and can be spotted in the winters in central and northern parts of the country like Bhopal.

The Spotted Redshank is among the migratory birds that visit India during winters and soars the skies of Scandinavia during summers. They are tiny looking birds that require tropical conditions along with the moderate temperature. They prefer wet coniferous forest for nesting and hence like to spend time after the monsoons in India. The female usually lay eggs and leave India for Scandinavia while the young ones hatch themselves and are taken care of by the male birds. After the birds grow, they too travel back to Europe. In India, these birds are spotted in November in marshy and wetlands of Haryana.

Migration Journey: From Europe to India

Rosy pelican is famous because of its gigantic wings which stretch as long as 12 feet in length. Like other migratory birds that visit India, Rosy Pelican migrates to northern parts and settles down in shallow freshwater lakes in India that contains much fish. Many of these birds settle down in Pakistan also but some visit India while others fly to Nepal.  Occasionally, these birds would steal other birds’ food or eat ducklings and seagulls.

Migration Journey: Alaska and Europe to Rajasthan in India

Bluethroat is a beautiful migratory bird that looks like a sparrow. As the name says, these birds are distinguished by the blue feathers below the bird’s neck. Since these birds are very small, they cannot survive the extreme cold of Alaska and Europe. Bluethroat can be spotted in Rajasthan during winters but they travel as far as South Maldives to book a temporary home.

Migration Journey: From Singapore to Pondicherry in India

Asian Koel is not indigenous to India and migrates from Singapore each year. They have a beautiful voice and bloodshot eyes. The koel would lay eggs in the nests belonging to other birds like a crow who nests the invaded species chicks. The summers in Singapore is very hot for koel to survive which makes them travel to India to get a cool climate along with considerable food. They are also known as the State Board of Pondicherry.

Migration Journey: South Asia and Madagascar to Haryana in India

These migratory birds that visit India are also known as Natka in India. They look like a queer and large duck in freshwater wetlands of sub-Sahara Africa, South Asia and Africa. The birds are also seen in the continental South America and Paraguay River areas along with south-east Brazil and Argentina. Found mainly in Haryana, Comb Duck migrates to India to escape extreme weather conditions in other places where they breed.

Black-crowned Night-Heron is one of the migratory birds that visit India which looks like a night raven. While the winters are spent in the west, the Herons like to spend their time during summers in Asian countries, mostly in India’s Bengal region. The bird likes to eat insects, fish and snakes.

The Blue-cheeked bee-eater is a small bird belonging to the bee-eater family called Meropidae. They are strongly migratory and seen seasonally in India travelling largely for breeding purposes. The bee-eater’s favourite food is Indian dragonfly. They spend their time in summers in India and fly back to their home at the end of the season.

Golden Oriole is said to be the cousin of Oriole and is the native of Indian sub-continent. The Eurasian Golden Oriole drops by every summer from Europe and Africa to exchange pleasantries. Some of the striking features of oriole are distinct cry sound which is said to be un-forgetful.

Since migratory birds need various sites and distribution areas, the loss of cold and food can have a dramatic impact on the bird’s survival. The birds fly across various countries and boundaries with different environmental conservation measures. These birds are of great significance to balance ecology and hence we must look for ways so that the migratory birds are protected and conserved appropriately.

Good migration not only helps migratory birds to survive for the next generation but also provide bird-watchers with pleasure to watch the birds migrate every year.