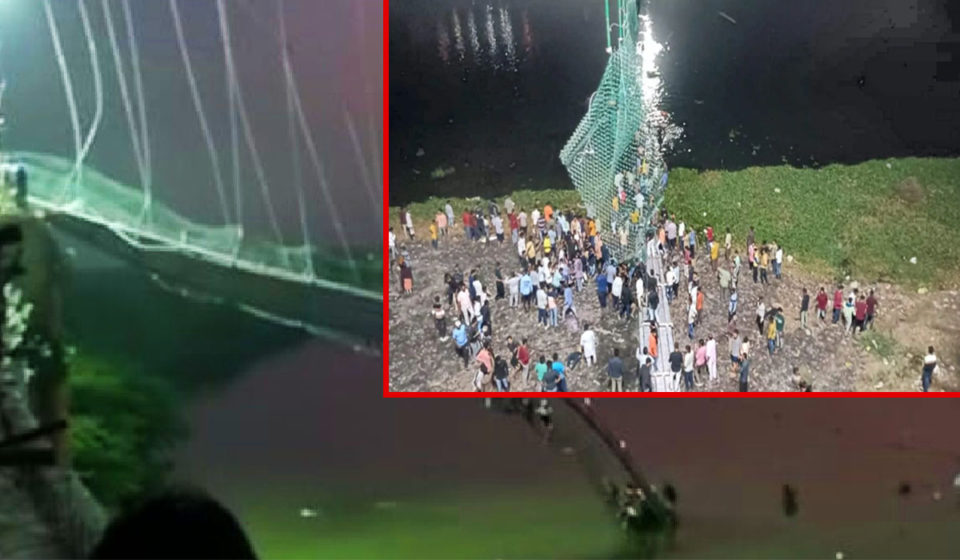 Gujarat’s Morbisuspension bridge on the river Machchhucollapsed on Sunday eveningkilling over140 people. People shook the bridge and it came crashing down as seen in the CCTV footage.400-500 people were on the bridge at the time of the incident and when it collapsed, hundreds of them fell into the river.

The bridge had reopened for the public just four days back after remaining shut for renovation work for seven months which was built during the British-era. The state information department said that multiple teams of SDRF, NDRF,Army, Air Force, and Indian Navy apart from local rescue teams were deployed for relief work that continued through the night.

Gujarat chief minister Bhupendra Patel reached the incident site in the night to take a stock of the situation after cancelling all his scheduled events for Sunday. Soon after he also visited the district hospital where the injured had been admitted. Bhupendra Patel spoke to PM Narendra Modi soon after the incident happened, and the latter called for an ‘urgent mobilisation’ of teams. Patel announced a compensation of Rs4 lakh to the family of deceased and Rs50,000 financial help to those injured in the accident. The chief minister is likely to stay in Morbi till the rescue operations are not over.

In the video, people can be seen gripping on to the bridge and trying to swing it using the cables. The bridge is crowded and as people start to shake the bridge, it swings and collapses. Hundreds of them fell into the river.

UTIs Are on Rise: Here’s How to Prevent and Protect

World Vegan Day: What Happens to Your Body When You Go Vegan?