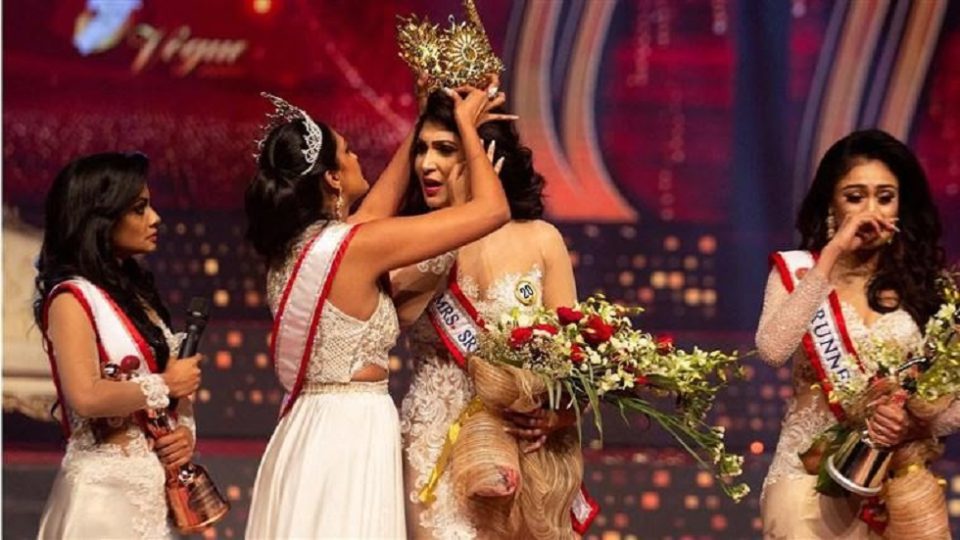 A more recent controversy erupted during the Mrs Sri Lanka beauty pageant when the former Mrs World titleholder snatched the crown from the current winner’s head. She made false claims that the winner was a divorcee and hence must be considered ineligible for taking part in the contest.

What happened in the Mrs Sri Lanka Pageant event?

Pushpika De Silva was announced the winner at the Mrs Sir Lanka competition and cheered by the spectators in Sri Lanka’s capital Colombo. The video went viral all over the media showing the organizers placing the winners’ crowns on her head.

Shortly after announcing and placing the crown, the former winner i.e., 2019 winner of Mrs World 2020 took the stage and picked the speakers on her hand. Caroline Jurie said, “I have a small request, as for the Mrs World Inc., there’s a rule that you’ll have to be married, and not divorced. So, I’m taking my first step saying that the crown goes to the first runner-up.”

After making the claims, Jurie turned to shocked De Silva and took the crown from her head forcefully. Thereafter, she placed it on the head of the first runner-up who instantly burst into tears and thanked the judges. De Silva walked off the stage after the dramatic incident. However, the organizers took the stage and declared De Silva as the official winner and said that contestants who are married legally can take part in the contest.

The Mrs World series is one of the international beauty pageants that is contested by married women. The pageant was found in 1984 in which every country’s Mrs Title winners advance to the final Mrs World competition to face other country winners. As per the general rules, every contestant must be married at the date of entries. The concept behind Mrs World has its roots in Mr America. The current titleholder of Mrs World is Caroline Jurie of Sri Lanka who was crowned on 2019 December 6 in Las Vegas, Nevada.

Who is Caroline Jurie

Caroline Jurie is the former Mrs World 2020. She was born in Sri Lanka and represent her country as Mrs World 2020 held in Las Vegas in 2019. She was supported and guided by a prominent beautician and an entrepreneur named Chandimal Jayasinghe for makeup and her looks before she took part in the Mrs World beauty contest.

Former Mrs World, Jurie had modelled at Colombo Fashion Week wearing a stunning collection of Amilani Perera that is made by girls and women who endure domestic violence. She had also worked for Virgin Mega Store as a sales executive in Dubai, UAE. Jurie is a remarkable Instagram model too with more than 79000 followers.

De Silva is the current Mrs Sri Lanka and is expected contestant to take part in Mrs World beauty pageant representing Sri Lanka. At present, she has separated from her husband due to some personal reasons but has not divorced yet. After the controversial situation in the beauty pageant 2020, she claimed that if she was ineligible, she would have been removed by the judges in the very beginning. In one of her statements, Silva said that Jurie has insulted her and that the true queen never snatches others crown.

The organizers of Mrs World Inc. are reviewing the incident and has released a statement, “We are deeply disturbed and sincerely regret the behaviour of our current titleholder, Mrs Caroline Jurie, Mrs World 2020, at the crowning,”. With an official statement, the organizers had asked Jurie to apologise for her actions.

In another statement when Jurie refused to apologise, the organizers said that “Let it be known, Mrs World Inc. does not sit in moral judgment,”. “If the delegate sent by Mrs Sri Lanka-World to compete in the international competition is legally married she will be accepted.”

Beauty Pageant controversies of all times

In history, many beauty pageant controversies have been envisaged by the world where the participants and former winner have accused winners due to relationship status. Beauty pageant rules are often been criticised as being limited and outdated where some people have often urged to change the guidelines. Well, we have collected few instances that have taken place in similar kind of beauty pageant contests where either winner is disqualified or have been dethroned.