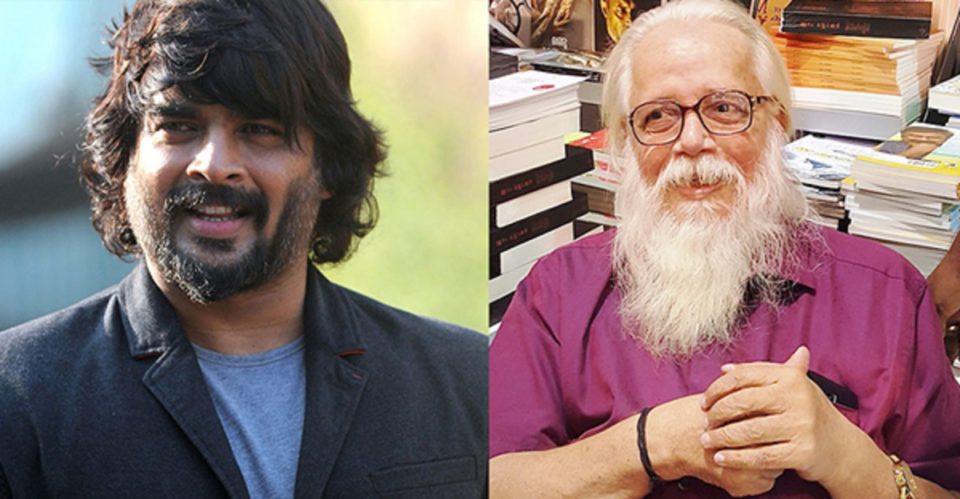 A film based on Nambi Narayan, Rocketry: The Nambi Effect is directed by R Madhavan and stars him in the lead role. The film reveals Nambi’s achievements as a scientist and how he faced accusations in an espionage case. The movie reaches the theatres on 1st July and the audience are excited as is Nambi Narayan who currently stays in his home in Thiruvanthapuram.

R Madhavan is the film producer, director and actor who will play Nambi in the movie. He has written the story plot as well and covers Nambi’s life history starting right from his school days at Princeton. Nambi’s career as a scientist in the Indian Space and Research Organization is also reflected upon besides the trauma, he went through because of a misleading case of espionage that was thrust upon him in 1994.

Nambi Narayan was honoured with the Padma Bhushan in 2019 and was compensated for the trauma he had to face because of false allegations. The movie Rocketry: The Nambi Effect premiered at the 75th Cannes Film Festival on May 19, 2022.

Why did Madhavan choose to make a movie on Nambi Narayan?

Nambi Narayan’s career and personal life became famous due to the case where he became the victim of a media witch hint that dragged Nambi’s name in a sensational news headline wrongly. Madhavan contacted Nambi five years ago and met him face-to-face in Thiruvanthapuram. When Nambi agreed to the movie, the two of them sat closely and interacted about every stage in the movie including the scripting. When they interacted, Nambi said, “My story left him in tears,”.

Madhavan movie, according to Nambi narrates real truth which is free from any kind of lies or false thrills. He said to the media, “Only facts are narrated in the film. Certain portions had to be toned down for viewers, particularly the police torture. It was much more than what is shown in the film,”.

In 1998, Nambi fought a legal battle in the Supreme Court to clear his name from false accusations. The court found him not guilty of the charges while trials and tribulations made Nambi stoic.  It was then he decided to look forward rather than live in the past. He says, “Madhavan told me that most people know me only in connection with the espionage case. He wanted viewers to know about my contributions to the nation and my achievements,”.

Nambi Narayan was born on 12th December 1941 in Nagercoil of Princely states of Travancore. He comes from a Tamil family. Nambi was a middle-class family’s first boy, after five girls. His father was a businessman and traded coconut kernels and fibre. His mother stayed at home and took care of her children. Nambi was a bright child always and says, “I always had a fascination for aircraft and flying objects,”.

Nambi completed his schooling at DVD Higher Secondary School. He is married to Meena Nambi and the couple has a son, Sankara Kumar Narayan and a daughter Geetha Arunan.

Nambi completed his mechanical engineering in Madurai and started his work career in 1966 at ISRO. He lost his father when he was pursuing his bachelor’s degree. He became the technical assistant at the Thumba Equatorial Rocket Launching Station. Nambi acquired a NASA fellowship and was accepted by Princeton University in 1969. There, he completed his master’s program in chemical rocket propulsion under professor Luigi Crocco.

Nambi Narayan came back to India after he accomplished expertise in liquid propulsion. It was that time when Indian rocketry was solely dependent on solid propellants. He made liquid prepollent motors for the first time and built a successful 600 kilo thrust engine in the 1970s. After this, he started working on bigger engines.

ISRO highlighted his managerial and organizational skills but has also found out about his private business ventures. In 1982, an enquiry was set by the vigilance cell but was dropped later. R.B. Sreekumar was the commandant of the Central Industrial Security Force unit and was posted at the Vikram Sarabhai Space Centre. He was found in a small allegation of tender manipulation that time.

In 1992, India and Russia made an agreement to transfer the technical terms to develop cryogenic fuel-based engines and procure two such engines. Though, it did not work that way after U.S. president George Bush wrote to Russia about objections to the transfer of technological expertise. He even threatened Russia to blacklist from the select-five club. Russian president, Boris Yeltsin succumbed to the pressure made and denied the technology to India.

India, to bypass the monopoly signed a new agreement with Russia to fabricate the four cryogenic engines along with two mock-ups after making a global tender without transferring the technology. ISRO that time had reached a consensus with the Kerela Hitech Industries Limited that provided with a cheap tender to fabricate engines. However, all this planning failed because of a spy scandal that took place in 1994.

A month before Nambi’s arrest, Kerela police arrested a Maldivian woman named Mariam Rasheeda as she overstayed her visa. They arrested Fauziyya Hassan a week later who portrayed herself as a bank worker from Male, the Maldive’s capital city. The scandal was thereafter revealed by the local newspapers that reported Maldivian women as spies and how they stole Indian rocket secrets to sell them to Pakistan with assistance from a scientist at the space agency. It was Nambi who was accused of charming the women to do so.

What were the charges against Nambi Narayan?

Nambi Narayan was accused of sharing critical data on India’s space program mission with the two Maldivian women who sold the drawings of ISRO’s rocket engines to Pakistan. The nationwide media revealed the story urgently along with the trials that were launched against Nambi, titling him as a conspirator and a traitor.

Nambi was kept in judicial custody for 11 days and was charged with violating India’s secret laws, corruption and other cases. Reports claim that Nambi was beaten harshly by the interrogators. He was handcuffed and tortured under inhuman conditions. He was once forced to answer them for about 30 straight hours along with a lie detector test even though its results are not admissible as evidence in court.

Nambi was kept in a high-security jail where other co-prisoners were serial killers, beating others to death. During the interrogation, he explained that rocket secrets could not be transferred via papers and that he had been framed. However, the fact that India struggled to obtain cryogenic technology to build powerful rocket engines did not move them. Hence, Nambi had to stay in captivity for 50 days, including one month in prison from where he was taken to court hearings. The crowd shouted that he was a traitor and a foreign spy.

A month after his arrest, the CBI (Central Bureau of Investigation) took over the case from the Kerela Intelligence Bureau. On 19th January 1995, Nambi was released on bail and all the charges made against him were dismissed as false by the CBI in 1996. Supreme Court of India too dismissed the Nambi case in 1998. Though, ISRO conducted an internal investigation and concluded that cryogenic engine drawings were in place and had not leaked.

On 7th November 2013, Nambi Narayan pushed for justice in his case and seek to expose the people behind the conspiracy. He said that his case could discourage the youth and hence, he demanded the truth.

A three-member panel headed by the former judge was appointed by the Supreme Court on 14th September to probe his arrest and alleged torture. The panel led by Chief Justice Dipak Misra awarded Nambi Narayan a 50-lakh compensation for the mental cruelty he had to suffer all these years. In addition to it, the Kerela government decided to pay him 1.3 crore rupees as compensation and false allegations.

Nambi Narayan was honoured with Padma Bhushan by the Government of India on the 26th of January 2019.

Nambi Narayan’s autobiography, Ormakalude Bhramanapatham was published in 2017 and had gone for a second edition. The book contains facts about the case while Nambi was in ISRO and how he was ill-treated by the Kerela officials post-arrest in 1994. It was Nambi who exposed how the case was framed against him and that his house and office were never raided before his arrest. Nambi said that “around 40% of people who had been jailed were innocent like him”. But he also added that he was not blaming the judiciary as it takes time to solve critical cases.

Best Comedy Web Series in Hindi That You Should Binge Watch Now!