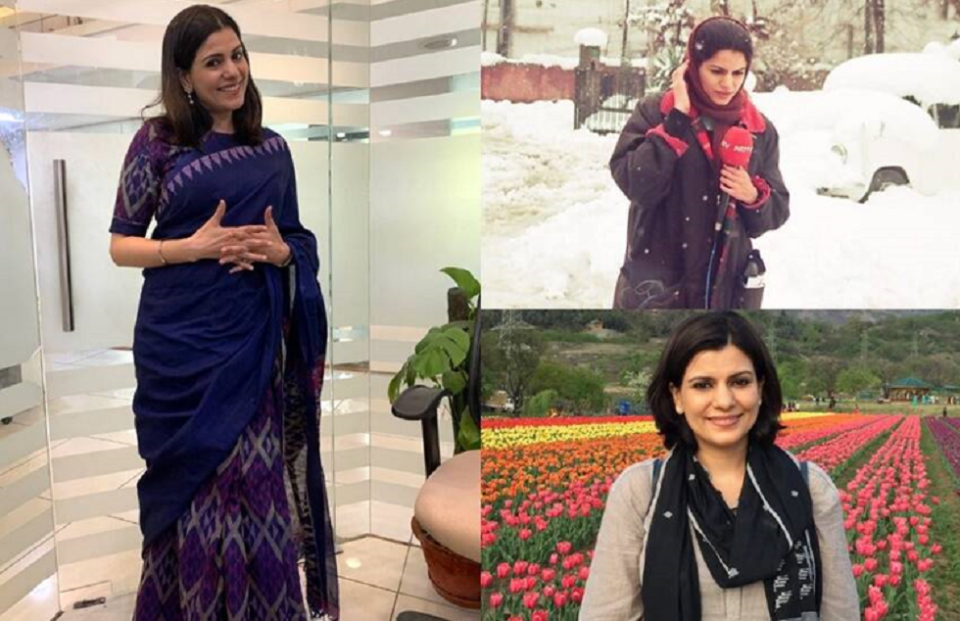 Born on 11th April 1977, Nidhi Razdan is a popular Indian journalist and a television personality. Nidhi is the primary anchor of news debate shows, The Big Fight and Left, Right and Centre of NDTV 24×7 and executive director of NDTV. You may see this Kashmiri girl reporting on major issues at NDTV 24×7 platform and in evening breaking news, major headlines, etc. Nidhi Razdan hosts many debates shows alongside too which covers national and international topics.

Nidhi was born on 11th April 1977 in Budgam, Jammu Kashmir in India. She is a Pandit Kashmiri. Her father’s name is Maharaj Krishan Razdan and had previously worked as a Chief Editor in a popular news agency named Press Trust of India. Nidhi’s mother is Sarla Razdan.

Nidhi Razdan completed her schooling at Apeejay School in Sheikh Sarai, New Delhi and graduated from Lady Shri Ram College. She later pursued TV Journalism and a Post Graduate Diploma in Radio from the Indian Institute of Mass Communication, Delhi.

Nidhi Razdan has a beautiful complexion and loves to live a simple life. You must have seen her mostly wearing Indian traditional dresses such as sari and salwar. Nidhi Razdan likes to do yoga to keep her body and mind healthy besides taking an early morning walk each day. She likes to wear different kind of earrings and has a huge collection of them. Among all dresses, she loves wearing a Banarasi sari.

Heightwise, this news anchor is 5’5″ tall and weighs around 53 kilograms. Although she has beautiful black hairs, she likes them keeping short. Her eyes are black and she hates having body tattoos.

Since Nidhi Razdan lives a bachelor life, she lives with her parents and does not have any children. She is a divorcee and was in a relationship with her ex-husband, Neelesh Mishra since 2004. Her husband is too a journalist and a writer like Nidhi which made her marry him in the year 2005.

After dating for one year, she married her boyfriend but deteriorated due to some reasons after two years. The couple went for a mutual divorce agreement. Previously, Nidhi Razdan was in news for having an affair with Omar Abdullah, a famous politician for a long time. They were spotted together at various functions and major events.

Nidhi joined NDTV in the year 1999 and is working in the same channel since then. All her major shows are broadcasted in New Delhi and cover major discussions and debates beyond breaking news and everyday headlines. Since the very beginning of her career life, Nidhi covered a wide range of news events besides hosting series of shows, news reports and live reporting. More popularly, she is seen hosting debates that involve a wide range of economic, social and political stories in India.

Some of the major topics hosted by Nidhi Razdan includes general elections, India-US nuclear deal elections in Jammu and Kashmir, Gujarat earthquake in 2001 and major new developments in India.  Along with hosting news debate shows, Nidhi can be seen in various documentaries from Tibet, Pakistan occupied Kashmir and United Kingdom after the train bombing event. She has also written a book titled Left, Right and Centre: The Idea of India that was published in the year 2017 by Penguin Random House India.

Nidhi Razdan offer from Harvard University and the phishing attack

In June 2020, Nidhi Razdan quit NDTV since she was offered an associate professor in journalism job at Harvard University. On 15th January 2021, she tweeted that she has been just another victim of a sophisticated phishing attack that was revealed when she contacted Harvard University personally. After the incident, Nidhi announced that she would take legal actions against the preparators. She said,

“After hearing from the University, I have now learnt that I have been the victim of a sophisticated and coordinated phishing attack. I did not receive an offer from Harvard University to join their faculty as an Associate Professor of Journalism. The perpetrators of this attack used clever forgeries and misrepresentations to obtain access to my data and communications and may have also gained access to my devices and my email/social media accounts,”

Earlier Nidhi has informed on Twitter that she was preparing for her job at Harvard University that was scheduled to begin from September 2020. The classes were however called off because of pandemic and were supposed to begin from January 2021. Unfortunately, her step became an incident of mockery and netizens mocked her hilariously stating, “shows the level of journalism standards.”

Some lesser-known facts about Nidhi Razdan

Know About Disha Ravi and Her Connection With the Toolkit Case