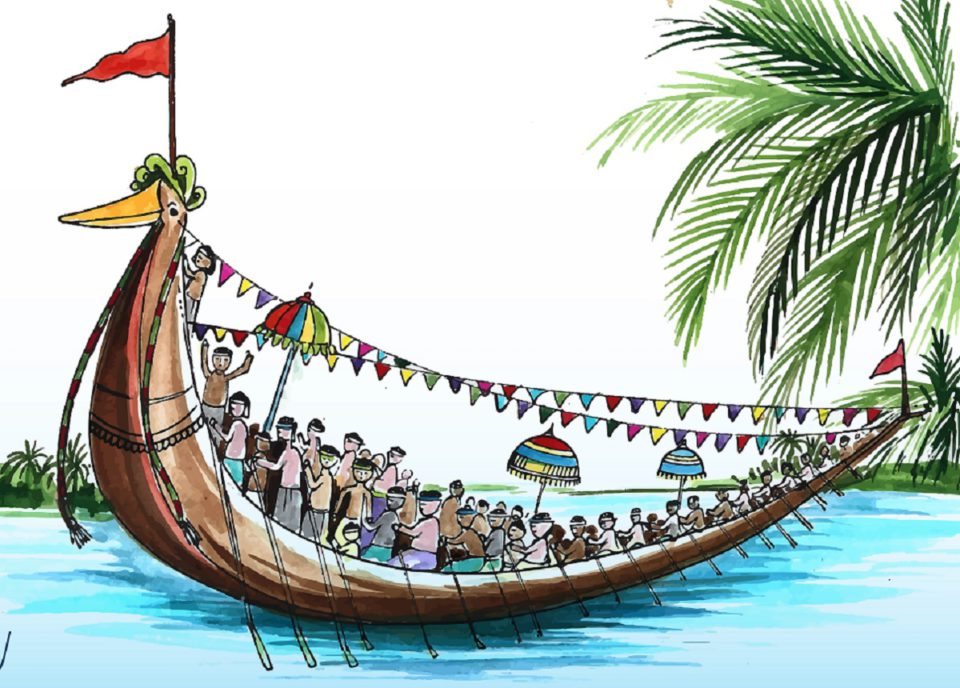 Onam festival in India is majorly celebrated in the southern states of Kerela. The festival celebrates Lord Vishnu’s avatar as Vamana and the homecoming of Emperor Mahabali. It is believed that every year the emperor visits all the Malayali homes. This year, the Onam celebration will start from August 30 till the 8th of September. On the celebration days, the entire state of Kerela is decorated beautifully with flowers while men and women get themselves dressed in traditional attire. You will also find intrinsically decorated Pookalam, mesmerizing Kaikottikali dance, snake boat race and much more during the Onam festival. Read below to know the legend behind the Onam festival and how the people of Kerela celebrate the harvest festival in Kerela.

The legend behind the great Onam festival can be attributed to the event when the Gods were jealous of King Mahabali. The event led to the emergence of the Vamana avatar of Lord Vishnu. The festival is celebrated to welcome Mahabali each year who is believed to visit every home in Kerela during Onam. But who was Mahabali?

King Mahabali was an asura in real life who ruled Kerela in the ancient era. He was very emotional unlike other asuras and was hence, loved immensely by the people. Kerala became prosperous under Mahabali’s rulership and people seem contended. King Mahabali’s grandfather was Prahlad who was born to a demon Hiranyakashyap. Mahabali had a son named Bana, who too became a wise king later. Although Mahabali was born to a demon family, he was a strong devotee of Lord Vishnu. As he was very brave and strong, people called him Mahabali which means a strong man.

The reason behind the Vamana avatar

Since Mahabali became the favourite of people and highly popular at that time, gods became angry and jealous. They thought that their supremacy was under threat and thus strategized to overpower Mahabali. The mother of gods Aditi asked Vishnu to help them as Mahabali used to worship him. As per history, Mahabali was a kind and generous man. Anyone who asked him for help was always pleased and provided with all. To test the generosity of the king, Lord Vishnu masked himself as a dwarf brahmin and named himself Vamana.

He went straight to the king and asked him to donate a piece of land that could be covered by three footsteps. Mahabali was surprised by the demand but agreed readily. Although the king’s advisor Shukracharya cautioned him to make any promises, the king decided to keep his word and asked the brahmin to take three steps. As soon as the king granted Vamana’s demands, the brahmin boy’s body expanded and became huge. He covered the entire earth in one step, the sky in the second and asked the king where should he keep his third footstep.

Mahabali understood that he was no usual man and can destroy the earth from his third footstep. The emperor folded his hands and bowed before the brahmin asking him to keep his third footstep on his head. When the brahmin stepped on the king’s head, it thrust him into the underworld. Afterwards, he asked the brahmin to disclose his true self. Vishnu uncovered his face before the king and told him that he was just testing his generosity which the king passed excellently. Mahabali was happy to see his Lord in front of him. Vishnu was so pleased that he granted a special boon to Mahabali as a reward.

As a testament to the rich folk culture of Kerela, the Onam dances of Kerela are renowned around the world. The dancers display various unique dance styles that attract dance lovers from every hook and corner of the country. Some of the notable dance styles include Kathakali, Kaikottikali and Thumbi Thullal. The dance costumes are equally enthralling and full of colours. The music played is well orchestrated while the atmosphere becomes quite entertaining. The dancers wear wooden masks and grass which they shake with the rhythm provided by the Onavillu to celebrate the festival. The Pulikali performers paint themselves like tigers to enact hunting activities which are again amusing.

Onasadya is the grand culinary part of the festival in which a unique meal is prepared by the people as a part of the grand feast. Onasadya is prepared on the final celebration day of Onam which is called Thiruanam. The people celebrating the Onam festival make a wish on that day for their prosperous life and pray for their beloved king Mahabali whose spirit is believed to visit Kerala each year during Onam. This is because Mahabali had asked the Gods to allow him to visit Kerela every year to give love to his kingdom. People of Kerela, on the other side, convey their love for their king by preparing grand Onasadya.

The main ingredient of the nine-course meal is rice and is strictly vegetarian. The food is served on banana leaves served on a mat laid on the ground. The food serving order is also maintained strictly and as per tradition. previously, around 64 dishes were served during Onasdaya but today, people have reduced them owing to the urban lifestyle and dietary restrictions.

Pookalam is an essential part of the Onam festival celebration on Kerela in which colourful flowers are laid on the floor. The Pookalam tradition is followed by every home in Kerela during the ten-day celebrations. Poov means flower and kalam mean colourful sketches. By arranging flowers in beautiful patterns just like rangoli, people show a gesture of warm welcome for their king’s visit.

The famous snake boat race of the Onam festival

The snake boat race is traditionally called Vallamkali which is the most exciting part of the Onam festival. In fact, the snake boat race attracts many national and international tourists who visit Kerela to enjoy the race. Vallamkali’s popularity is growing with every passing year mainly because of the traditional celebrations in the state at the time of festival and the Pandit Jawahar Lal Nehru trophy for the winners of the race.

One of the grandest parts of the Onam festival celebration is the royal elephant procession that takes place in Kerela’s Thrissur. The city is the cultural capital of the state. All the elephants participating in the royal ride are adorned with gold which makes them look magnificent. The elephant carries huge golden plates on their forehead while its body is covered with a beautifully embroidered cloth. Satin and silk umbrellas laced with metal are also placed above besides paintings that make each elephant look unique. A huge number of people follow the grand procession of elephants while dancing, singing and merrymaking together.