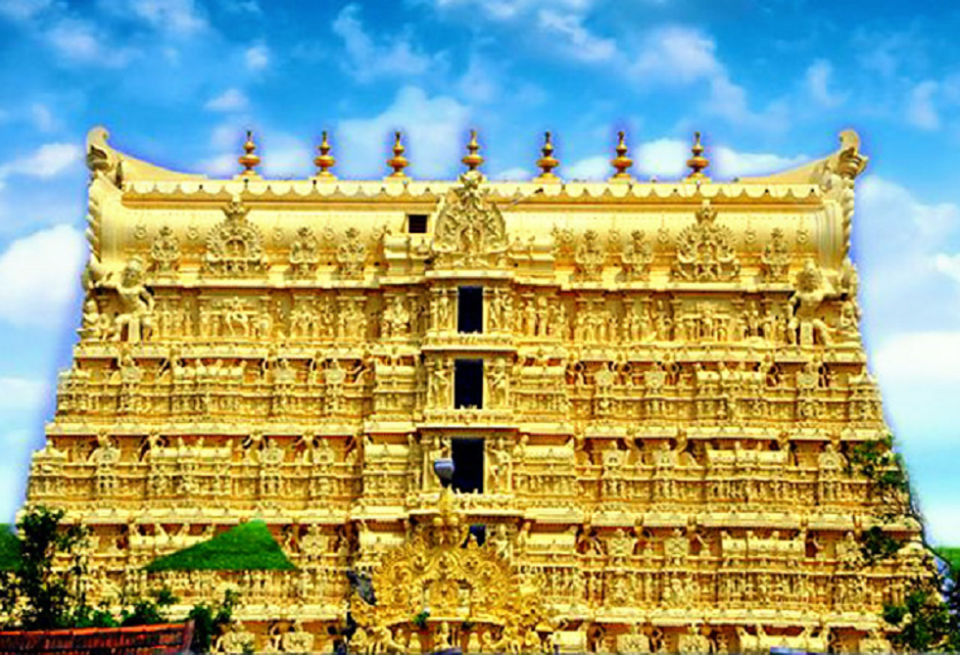 The historical roots of the temple can be dated back to the era when Tamil literature was getting recognition in between 6th and 9th century CE. The structural additions to the temple were made in the 16th century when Gopuram was constructed. The temple is hundreds of years old and contains unimaginable treasure, including artefacts of the Chera kingdom, Greek and Roman epochs, and Pandya and Mesopotamian treasures used in between 500 BC to 300 AD.

Who discovered the historical treasures contained by Padmanabhaswami temple?

Sundararajan, an IPS officer lives near to the Padmanabhaswami temple. This 70-year-old officer had filed a petition that among 6 secret vaults of the temple, 5 have been opened recently. The earthing of the significant treasure is estimated not less than 1 Lakh Crores!

Deities in the Padmanabhaswami temple

The Padmanabhaswami temple is said to be a replica of Sri Adikesavaperumal temple situated in Thiruvattar. Despite the temple has been attacked 300 years back, it still holds its charisma and special place in the hearts of people residing in India. The main deity held by the temple is of Lord Padmanabhaswami which is enshrined in the posture known as ‘Anantha sayanam’ meaning eternal sleep in Yoga-Nidra on the serpent named Anantha. The King of the Travancore holds the title of the servant of the Lord Padmanabhaswami and is called as ‘Shree Padmanabhadasa.

In the sanctum, Lord Padmanabhaswami lies upon a serpent known as Adi Sesha. The serpent has five hoods that are faced inwards revealing contemplation. The right hand of the Lord is placed upon Siva Lingam. The Goddess of prosperity, Sridevi and the Lord of the Earth, Bhudevi are the two consorts placed in either side of Lord Vishnu. The shrine of Brahma can be seen on Lotus flower that emanates arising from the navel of Lord Vishnu, depicting himself as the creator of the universe. 12,000 Shaligrams makes the deity which has been collected from the banks of a river in Nepal. The Shaligrams have been brought here due to certain rituals similar to the ones followed at Pashupatinath temple.

Who is permitted to enter Padmanabhaswami temple?

Unlike most of the Hindu temples, the entry to the Padmanabhaswami temple is restricted to Hindu worshipper only or the ones who strictly profess Hindusim. To enter the temple, you need to follow some protocols such as following the dress code or time.

The Secret doors of the Padmanabhaswami temple

The treasures of the Padmanabhaswami temple were always kept secret until an Advocate Ananda Padmanabhan observed and questioned about the hidden treasure in the temple. On September 2007, two of the devotees filed a petition against the management who took care of the temple treasures in the court of Trivandrum. The petition said that from the study and research made of the temple, many treasures lay beneath the temple behind the six chambers.

The treasure is of great value and therefore the petition asked the government to not to allow the temple management team to touch the Kallaras or the temple doors. On October 2007 Anantha Padmanabhan along with two officials entered the room where the deity has been kept. The vaults are C and D respectively that contains ornaments of God used during the festivals. The chambers were closed and sealed again by the officials. After filing various lawsuits, the Supreme court finally appointed supervisors to check the rest of the chambers in the temple. While supervising them, the two vaults were found to be filled with wealth that was estimated to be more than 1 Lakh Crores. The chambers A and B has not been opened yet since 1930.

What happened when the secret door of Padmanabhaswami temple opened 90 years ago?

On 1931 December, the secret chambers of the temple were opened by Sri Chithira Thirunal Balarama Varma. The key to the chambers, however, didn’t work well and so the temple staff had to wait for two and a half hours. An ambulance kept waiting outside the temple as they were unaware of what was behind the secret doors.  When the door was opened, four other doors lay behind it which were also opened. It was recorded at that time that the chambers contained four brass chests filled with old coins, a granary containing silver and gold coins along with many artefacts made of silver and gold. A wooden chest was also found that contained diamonds, gold, rubies and many precious stones.

More recently, the temple doors were opened in 2011 and thereafter in 2014 to inspect the items kept inside the temple. The vaults have been labelled from A to F for the purpose of records and bookkeeping. Two other chambers were found later during inspections and named as G and H. Vaults A and B have not been opened for years while C to F is opened periodically. Two priests named Thekkedathu Nambi and Periya Nambi are the custodians of the vaults that are been opened periodically for inspections. The detailed investigation of the value of the temple asset is still not made.

Is Padmanabhaswami temple the richest temple in the World?

From the findings and the estimations made of the temple treasures, Padmanabhaswami temple is the richest temple in the world. One of the wealthiest assets held by the temple is a three and a half feet tall idol of Mahavishnu that is made of solid gold. The idol is studded with precious stones such as diamonds and rubies. An 18 feet long gold chain has also been found along with 36-kilo golden veil, a 500-kilo gold sheaf and 1200 gold coins that are encrusted with rare and precious stones. Many precious artefacts are also held by the temple that is made out of gold and silver. 18th-century Napoleonic coins were also found in the treasure along with lakhs of coins belonging to the ancient Roman empire.

According to the former Comptroller and Auditor General, Vinod Rai, in the vault A, 800 kilos of gold coins made in the 200 BC can be priced over 2.70 crores. A throne made of pure gold is found that has been adorned with beautiful and precious stones along with tons of precious materials that can change the fate of entire nation. Such estimations reveal that Padmanabhaswami temple not only holds a significant position as the richest temple in the world but also an important place that conserves antiques and culturally significant valuables worth more than 120 lakh crores or $180 billion.

The mystery behind the seventh chamber of Padmanabhaswami temple

According to Bhagavata Puranam, the elder brother of Shree Krishna was Balarama in the Dwapar Yuga. Balarama is said to be the serpentine of Lord Vishnu in Vaikunta and had visited Padmanabhaswami temple.

Today, the entire world is curious to know what lies behind the mysterious seventh and the last door of the temple. Experts say that the door might get unlocked itself when a secret mantra is recited as it was locked similarly.

The chamber is regarded as highly mysterious by the temple trustees and few astrologers in India. According to them, opening it like other chambers can prove very risky and uncertain. The chamber B is made of solid steel and have two big cobras carved on it. The door is without any hinges or latch. The secret door is fixed with mantra known as ‘Naga Bandham’ by ‘Siddha Purushas’ or learned saints during the era of king Marthandavarma during the 16th century.

To open the doors, highly learned saint or Mantrikas need to recite the secret door opening mantra or chant ‘Naga Paasam’ and Garuda mantra. If any human attempt to open the gate through other means, catastrophes can occur in and around the temple area. The Vedic astrologers say that opening the gates forcefully without reciting the mantra can impact the entire nation adversely.

List of some precious wealth kept in the Padmanabhaswami temple.

Serpents made of gold and silver

Is the treasure of Padmanabhaswami temple safe?

The treasure in the temple is kept safely and remains untouched. The temple treasures are owned by rightful people i.e. the ancient worshippers who accumulated the precious treasures through the blessing of their god. The inheritance of safety and protection of temple treasure cannot be granted and does not fall under the right to use.