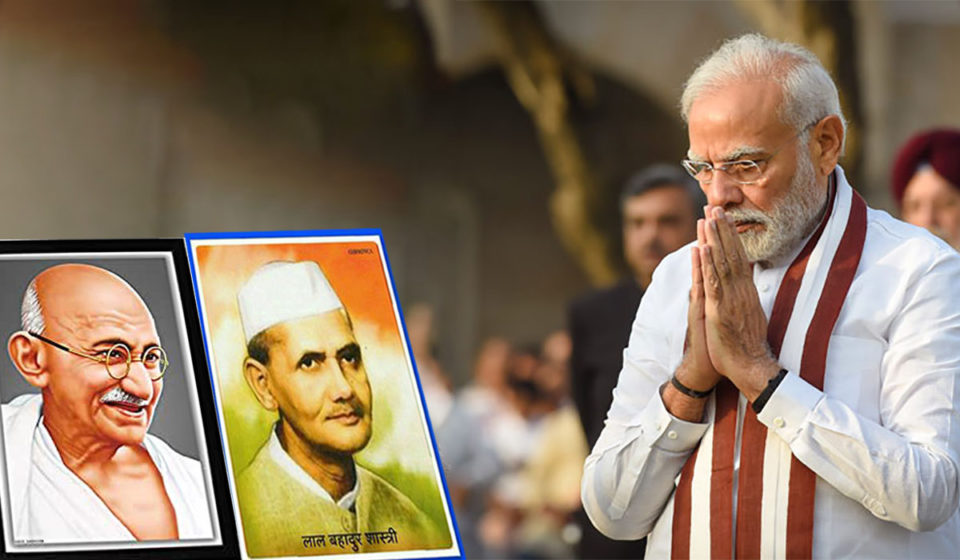 On the occasion of Gandhi Jayanti, Prime Minister Narendra Modi pays a heartful tribute to Mahatma Gandhi at Rajghat to mark his 153rd birth anniversary on Sunday morning. PM Modi bestowed flowers while bowing down in his honour. PM also paid tribute to former PM Lal Bahadur Shastri on his birth anniversary. He urged everyone to purchase khadi and handicrafts products as a tribute to him.

Mahatma Gandhi’s birth anniversary is globally observed as the International Day of Non-Violence, underlining his philosophy of non-violence to achieve social or political change.

“Lal Bahadur Shastri Ji is admired all across India for his simplicity and decisiveness. His tough leadership at a crucial time in our history will always be remembered. Tributes to him on his Jayanti,” he added.

“Today, on Shastri Ji’s Jayanti I am also sharing some glimpses from his gallery in the Pradhanmantri Sangrahalaya in Delhi, which showcases his life journey and accomplishments as PM. Do visit the Museum,” he further stated.

Born on October 2, 1869, in Porbandar town of Gujarat, Mahatma Gandhi or Mohandas Karamchand Gandhi adopted a non-violent resistance and was at the forefront of the freedom struggle against colonial British rule. This led to India finally achieving its independence in 1947. Globally, Gandhi’s birth anniversary is celebrated as the International Day of Non-Violence. Several events are held in India and across the world to mark the occasion.

Born in Uttar Pradesh in 1904, Lal Bahadur Shastri was the second Prime Minister of India and served from 1964 to 1966. He died in Tashkent on January 11, 1966, at the age of 61, soon after signing the Tashkent Pact with Pakistan.