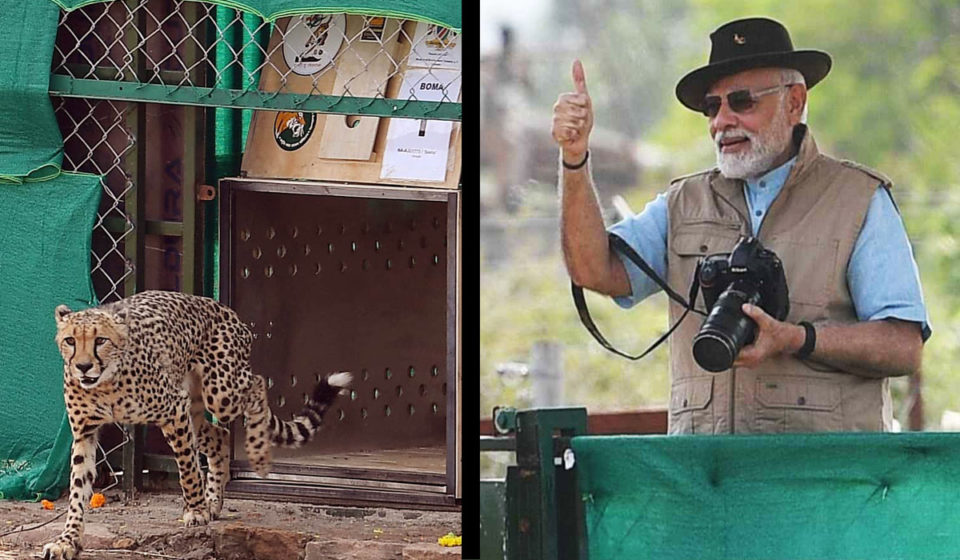 Project Cheetah: PM Modi today released three of the eight cheetahs that arrived in India on Saturday, seven decades after their local extinction, in an ambitious project to reintroduce the big cats starting from Madhya Pradesh’s Kuno National Park.

The cheetahs were brought in wooden crates and will be released in a specially designed enclosure where they will live for a month and begin a lifetime of acclimatisation to Indian prey and forest conditions. Every cheetah is radio-collared and their movements will be tracked. Each animal has their dedicated tracking team.

Addressing the nation on the occasion, PM Modi said, “Decades ago, the age-old link of biodiversity that was broken and became extinct, today we have a chance to restore it. Today the cheetah has returned to the soil of India.” “I am sure, these cheetahs will not only make us aware of our responsibilities towards nature but will also make us aware of our human values and traditions,” he said.

No greater gift for Madhya Pradesh than this on Prime Minister Narendra Modi’s birthday, state Chief Minister Shivraj Singha Chouhan said this morning, calling the ‘historic’ ferrying of the wild cats from Namibia to the Kuno National Park the biggest wildlife incident of the century. This will rapidly boost tourism in the state, especially in the Kuno-Palpur region, he said.

The Government of India, under PM Modi, has undertaken several measures toward wildlife conversation and protection of endangered species through efforts that resulted in increased forest cover, tiger reserves, and a steady increase in the population of wild animals that were close to extinction.