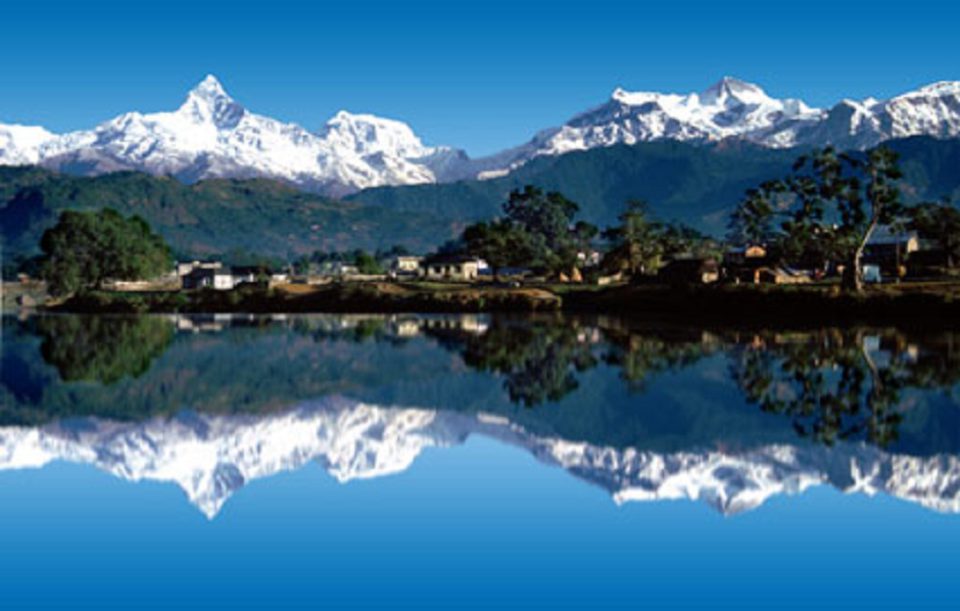 The second most visited place in Nepal is Pokhara. It is very popular among tourists who seek to spend time amidst a serene and tranquil atmosphere that is surrounded with the countryside and beautiful lakes. Pokhara offers its visitors almost every natural site that a traveller desires such as lakes, mountains, temples and rivers. Pokhara being the ‘tourist capital of Nepal’, is also the second-largest city falling in the Himalayan country after Kathmandu. Pokhara lies at an altitude of 900 metres above the sea level and makes it favourable for mountain trekkers.

Pokhara was once a significant trade point between China and India. Till the 1960s, this place was accessible by foot only. But with the construction of Siddhartha highway, the connection between Pokhara to the Southern cities of Nepal made Pokhara an important trading hub. As time went by, Pokhara became an attractive tourist destination. Now, travellers from all over the world visit Pokhara to spend gala time beside the Phewa lake, trekking in the Himalayan mountains along with taking part in other adventurous activities available in this tourist hub of Nepal.

Why is Pokhara called the gateways to the Himalayas?

Places to visit in Pokhara

Phewa lake is one of the most attractive tourist destinations in Pokhara. The freshwater of the lake can be found in the heart of the city and is the second largest lake in Nepal. The lake offers a pristine view of Himalayan mountains that are mostly snow-capped. Boating is one of the favourite sports in this location as the tourists love to boat amidst nature and a place which provides them with some heavenly views. You will be amazed to see the stunning reflections of Mount Machhapuchhre along with Dhaulagiri and Annapurna range in the calm water of the lake.

Davis fall in Pokhara is a beautiful waterfall located just 2 km away from the airport. Phewa lake act as a source of water for this fall. There is a story behind the name of this waterfall. It is said that once a woman drowned in this waterfall and disappeared. Since then, this waterfall is called the Davis waterfall. Another mysterious fact behind this waterfall is that the water flowing from the fall does not flow into a lagoon, lake or a river but to a dark hole that fades in the caves.

Gupteshwar cave is located beside Davis fall and comprises a spiral staircase that will lead you to the cave entrance. This structure formed naturally will make you remember the Shiva Lingam and old houses where ancient people used to live. The beautiful cave was discovered in the 16th century by some local people and since then, it has become both a tourist and religious spot.

World Peace Stupa is also known as the Shanti Stupa. The Stupa is famous globally for the Buddhist shrine that is built-in pagoda-style. The stupa is a Sanskrit word and signifies cooperation, peace and brotherhood in between diversified ethnic groups and races worldwide. The white Stupa in Pokhara is around 115 feet tall and has some 200 stairs that can help you climb up the Stupa. When you stand at the topmost point of the Supa, you can get the sight of the majestic Himalayas, reflections in the Phewa lake and entire Pokhara city.

Barahi temple in Pokhara is in the vicinity of Phewa lake and is visited by many locals. This place is religiously very significant and hence you may find many gatherings in the place throughout the year. People come here to give sacrifices of animals and birds as an offer to their god. Other than being a religious place, Barahi temple is surrounded by scenic beauty and offers some marvellous sights. You can hire a boat to travel around the temple area and explore the lakesides.

Bat cave is not for every tourist but for those who desire facing some different kind of travelling experience. Bat cave is also known as Chamero Gufa by the locals in Pokhara and as the name says, more than a thousand bats thrive in the cave during the night. Horseshoe bats are more commonly found in the cave. They can be seen clinging upside down the ceilings and roofs of the cave that are mostly chilly and dingy. The complete cave can be explored in 10 minutes that ends into a narrow shaft on the other side of the cave.

Pokhara has Old Bazaar from where tourists and travellers can buy some unique products at competitive prices. Old Bazar will give a much-needed break while you explore the adventurous city. The Bazar is 4 km away from Phewa lake and has an important temple named Bindhyabasini Temple.

Sarangkot is a small village located in the Sarangkot Mountain in Pokhara. This village is popular due to the beautiful views of sunrise and sunset offered by the Annapurna range. Many paragliders love this site for smooth take-off for paragliding. The village is around 1600 metres above the sea level and proves to be a perfect destination to capture some mesmerising views of Dhaulagiri, Annapurna and Manaslu Mountains. Sarangkot is also popular for having the fastest zipline in the world. An ancient fort can be visited which is just a few steps away from the village. If you love bird watching or envisage flora and fauna, Sarangkot is the place for you!

Guptaeshwar Mahadev temple is one cave temple and is dedicated to Shiva. The mandir is beside the area where River Seti emerges from the underground. In the 16th century, Shiva lingam emerged itself in this place which has a 3 km long cave. Being a holy place with a long, dark and deep cave, the temple offers some very beautiful views and an excellent opportunity for travellers to explore the nature in its truest form.

Ghorepani hill in Pokhara is around 3210 metres above the sea level and is recommended for trekking in Nepal. Many adventurous travellers visit Ghorepani hills to envisage the thrills of majestic hills. This place is also referred to as Nepal’s Classic Himalaya Trek and serves as an attractive place for nature lovers. The trekking begins at the Pokhara and passes through the Ghorepani till it reaches the Poon hills. If you ever go for trekking at the Ghorepani hills, you may find salt trade routes which run in between the paddy fields, waterfalls, gorges and forests. On the clear sky days, clouds shaped like cotton balls can be seen along with shepherds taking their sheep at the hilltops each day.

Jangchub Choeling Gompa is a monastery located in the Tibet’s refugee’s settlement in Pokhara. It was established as one of the Buddhist services centres and a place to carry ceremonies. This place was named by Dalai Lama and comprises of a beautiful structure that reflects history in itself. Since this monastery is built in Tibetan style, it holds a spectacular view and mostly used for prayer rituals and performing religious ceremonies. One of the main highlights that makes this place attractive is the copper and gold-plated statue of Buddha which is 7 feet tall and is surrounded by miniature statues of Buddha.

The International Mountain Museum in the Pokhara comprises some exclusive artefacts collections, original photographs and gears collected from the mountains, inhabitants living there and of explorers who travelled the highest peak of the world. This unique museum with collections related to mountain exploration debriefs about people residing in the Himalaya and about the famous peaks in the Himalayan range. The museum also contains few exhibits from other mountain ranges like Japan and Slovenia.

Bengas lake is one of the popular lakes in the Pokhara and the second largest lake in the city. On a clear sky day and at the foothills, the fresh lake waters reflect majestic reflections of the snow-capped mountains and clouds looking like cotton balls in the sky. You may like to stroll on the banks of the lake and listen to the melodious sound of the lake water mixed with the bird song.

Tal Barahi temple in the Pokhara is also known as Varahi temple or the Lake temple. It is a two-storeyed pagoda situated on the island in the Phewa Lake. The temple is dedicated to Goddess Varahi who was an incarnation of Durga. This temple is visited by both Buddhist and the Hindus for worshipping Goddess Varahi. It is said that King Kulmandhan Shah built this temple after dreaming about the temple shrine. The temple shrine is built according to traditional pagoda-style using wood, stone and bricks. The premise of the temple is large enough to hold many devotees at a time and have many seats where devotees can sit for a few moments before going back to the city.

Top Things to do in Pokhara

If trekking is your favourite sport, Pokhara is the place for you! Pokhara is actually called as a trekker’s paradise because of the mountain ranges that offers scenic views and trekking trails for mountaineers. You can opt for short treks offered by the Northern region of the Pokhara city or go for a longer trek that may last up to a few days amidst the mountains. The treks not only provide travellers with scenic views but also provides with spectacular sights of the surrounding valleys in the Himalayan range. Some of the favourite trekking trails include Mardi Himal, Ghorepani Poon Hill, Annapurna Base Camp and Dhampus Village.

Pokhara has some popular sites famous for boating. You can hire a big boat, a small paddle boat, rowboat or a sailboat to go for boating in several lakes such as Begnas lake and Phewa lake to enjoy boating in a shinny day. Boating is indeed one of the best ways to enjoy the picturesque view of the Pokhara valley where you can spend the entire day tirelessly.

The paragliding expedition in the Pokhara valley starts from Sarangkot and it around 30 minutes far from the Pokhara where you have to reach by a jeep. One will have to float over Sarangkot for some time before flying over Pokhara. Many paragliders are seen performing spiral acrobatic tricks in this place before descending back to the land surface beside Phewa lake.

Nepal is a favourite destination for spiritual lovers and nature lovers who look for ways to be in peace. Many yoga and meditations institutions can be found in Pokhara valley that will provide you with useful guidelines on yoga and meditation. To retreat yourself with magnificent sights and new ways of peaceful living, go and enrol yourself in these yoga centres. Many introductory classes are offered for free to the travellers that can be availed in the Pokhara in Nepal.