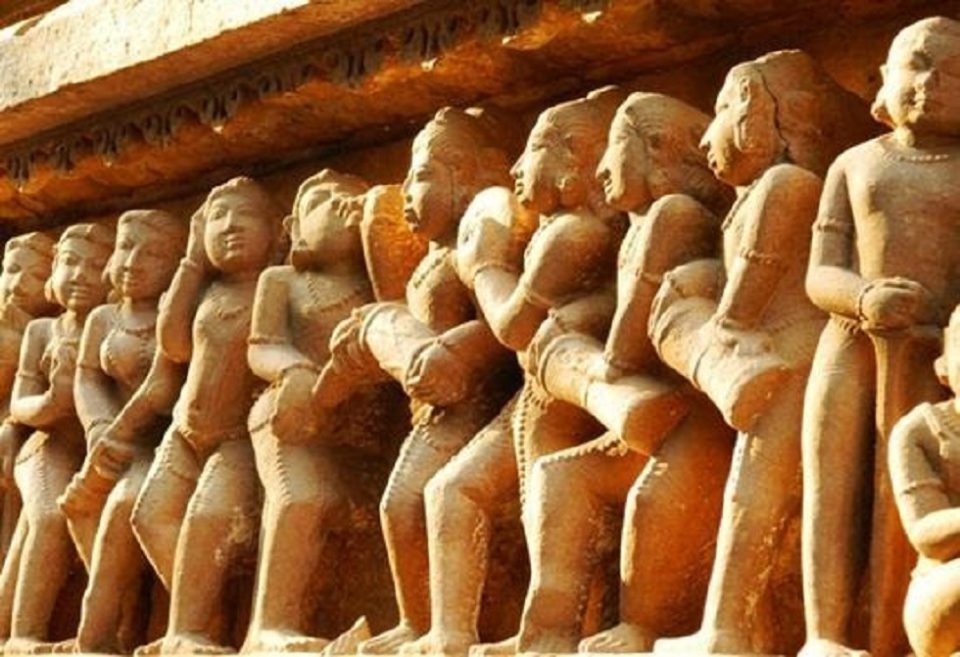 Although India is considered as one of the most conservative and traditionalist countries worldwide, believe it or not, India was very liberal and open about sex education in the past. This has been proven by sex sculptures in Indian temples that were built from the 2nd to 13th century. Sex and erotism were taught by Indian gurus like any other formal subject in an educational institution with its pictorial representation in the form of Kamasutra.

Linguistically, the word Khajuraho has been taken from the Hindi word ‘khajur’ meaning date palm tree. Khajur trees can be found in the surrounding areas of the temples while some believe that the reason behind the name is to refer to male sexual desire. Around 25 temples in Khajuraho are about 1000 years old. It is said that it took almost 3 to 4 hundred years to build this temple.

The main deities of the temple are Hindu gods and goddesses such as Shiva, Ganesh and Vishnu. Men and women in the scriptures are positioned in a seductive way representing popular positions such as polygamy, and polyandry. You will be amazed to know that the Khajuraho temple has been declared as a world heritage site by UNESCO. Indian government arranges sound and light show every evening that makes tourist more enthralled.

The relics in the temple have survived since the 13th century and has been dedicated to the Sun God. Some of the sculptures portray human anatomy in details and has been carved in the temple walls explicitly. The major attraction of the Sun temple in Konark is the 100 ft chariot standing on 12 wheels representing 12 months of a year. You can find a famous sundial in this temple that reads time accurately and without any manmade machine.

Many pilgrims visit the Virupaksha temple each year not just to envisage beautiful scriptures but to worship Lord Virupaksha in Hampi who is another form of Lord Shiva. One of the temple complexes has been named Ranga Mandap which has beautiful and coloured murals. Many caves and boulders surround the temple along with the river bank. With not less than 1600 monuments and reminiscent of three ancient dynasties, Virupaksha Temple has also been declared as a world heritage site by UNESCO.

Unlike the Sun temple in Konark, the Sun temple in Modhera looks like any other Indian temple that has intricate works carved on its walls. If you inspect the temple walls closely, you will find the details of figures engrossed in sexual and intimate acts. Like the Sun temple in Konark, this temple is also built in a way so that the first glimpse of sun rays falls on the temple shrine. This temple also has a water tank named Kama Kunda which is meant for soul cleansing. The temple is closely inspected and preserved by the Archaeological Survey of India.

Jain temple in Ranakpur is situated in the Pali district of Rajasthan. The temple is a three-storeyed monument artistically built with marble and stones. The Jain temple is regarded as one of the important pilgrimages for Jain people in India. Around 1444 marble pillars can be found inside the temple which holds unique carvings that are intrinsically designed to make counting impossible. The main walls of the temples are carved with many sensuous figures and sculptures of dancing fairies. This is the first Jain Tirthankara temple and is situated bedside Udaipur city. Though this temple is not as famous as Dilwara, the temple is visited by many tourists who visit Mount Abu. The temple took almost took 65 years to construct and has been made out of white marble.

Satyamurthy temple in Perumal is another temple that has been dedicated to Lord Vishnu and Goddess Laxmi. Archeologically, the temple is built in Dravidian style having a gigantic fort enclosed in the temple. The main idol in the temple is around 7 feet tall and is placed in the cave shrine. You can observe rituals and offers taking place in the temple each day. The temple is preserved by the Archaeological Survey of India as it depicts various acts of sex in great detail.

Nanda Devi is a popular tourist destination situated in Uttarakhand or the valley of flowers. The temple is dedicated to Nanda Devi who was a consort of Lord Shiva. It is said that Nanda Devi left her village to meditate for Lord Shiva and went to the Nanda mountains. Every year, the Nanda Devi fair is organised to honour the Goddess and her sister. Although the temple has been built simply, some erotic images or carvings can be found in the temple walls. The carvings are symbolic and state that people must give up their sexual desires to enjoy life after death.

The Lingaraja temple is another popular tourist destination in India and every day, around 6000 devotees visit the temple to offer their prays. Besides having numerous sculptures and pieces of art, the temple carvings reveal many postures of Kamasutra. The Lingaraja temple was originally built by the Kalinga dynasty and stand around 180 feet above sea level. The temple is dedicated to Lord Shiva and has as many as 150 small shrines. You must know that the temple guard does not allow any non-Hindu to enter the temple.

Kailasa temple is situated in a small portion of the Ellora caves and is dedicated to Lord Shiva. The temple structure has been designed to look like Mount Kailasa, Lord Shiva’s home. The temple was built between 757-783 CE by Krishna and is popular for vertical creation. It is said that the cave structures were carved from the top that continued downwards. Besides having a few erotic scriptures, the temple also has a scripture depicting Ravana lifting Mount Kailasa. Some of the scriptures on the left side are that of Lord Shiva followers while the right side has followers of Vishnu.

Tripurantaka temple is another popular temple in Karnataka that was constructed in 1070 CE. The temple is also known as Shivamogga and is popular for the stone carvings in the windows and screens. The walls and the ceilings have carved legends about mythical animals and Indian epics. The temple also has scriptures depicting Kamasutra poses on the outer walls along with a two-faced mythical bird to scare away the elephants from entering the temple gates.

10 Things That You Should Never Do in India

15 Useful Gifts for a Newly-wed Couple