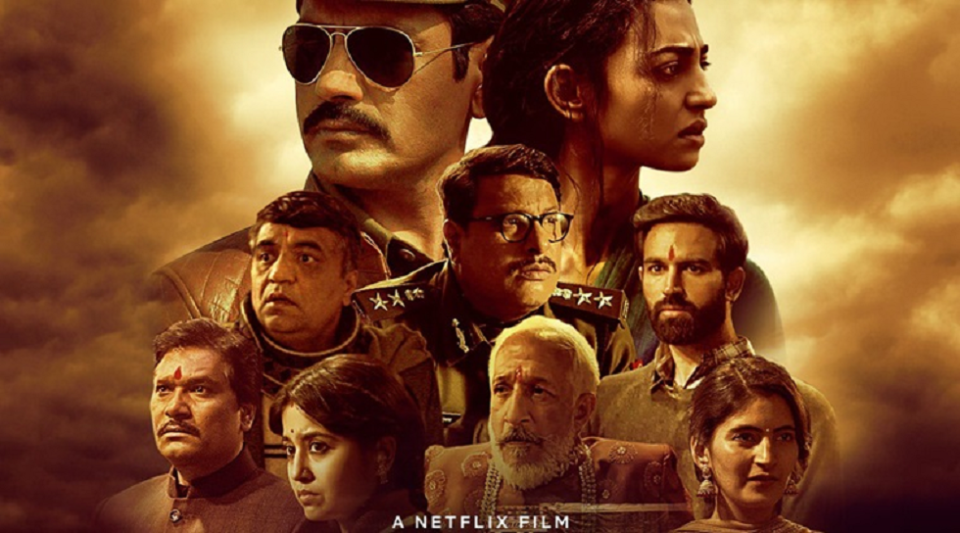 Honey Trehan crime thriller, Raat Akeli Hai premiered on 31st July on Netflix. The murder mystery in the movie hit the right boxes with the stellar cast where everyone has their stakes.

Raat Akeli hai is Honey Trehan movie which portrays a murder mystery. The thriller movie comes embedded with a complicated family drama. The storyline of the film is described from the lenses of a police officer named Jatil Yadav. The character of the police has been played in the movie by an ace actor Nawazuddin Siddiqui. The murder mystery is about Raghubeer Singh who is politically and powerfully very strong and is associated with Kanpur based businessman. Raghubeer is found dead on his wedding night. Radhika was his would-be bride and a young mistress whom Raghuveer was marrying after his first wife died.

The movie opens with a very dramatic scene where the haveli lights are all lit to celebrate the wedding ceremony of Raghuveer (Khalid Tyabji) and Radha (Radhika Apte). The guests pour in but there seems to be an unsettling peace somehow. People got a feeling about something bad is about to happen kind. Raghubeer Singh’s joint family comprises his sister, nephew Vikram, niece Vasudha, his pregnant daughter Karuna, their domestic helper Chunni who later plays an important part in solving the mystery and Radha who was living in the house as Raghubeer mistress before marriage. All of a sudden, the groom is found lying dead on his bed. His body all bloody becomes mysterious in the very beginning of the movie. A small-town policeman is appointed to look upon the matter.

Nawazuddin aka Jatil Yadav is an honest and brave cop who has a separate set of swag. He leaves no stone unturned and once he meets the family, he says “ye jo kaand Hua hai na, uski karenge hum jaanch”. The cop has UP accent and lives with his mother, Ila Arun. She is the one who brings a sense of humour in the movie. Nawazuddin loves using ‘fair and lovely’ and prefers eating rice noodles so that he can have it elegantly. He hates when his mom asks him about his marriage but secretly wishes to get a life-partner. Nawazuddin with his mother brings some good comic scenes in the otherwise a thriller and intense film.

Though every actor in the movie does justice to their roles, Nawazuddin has perhaps done the meatiest part. He is one actor who understands the significance behind a movie character and how to play it well. The role performed by him as a cop has indeed become of his memorable roles which we cannot forget. All the other characters in the film are given their roles and Jatil Yadav scans them thoroughly while making the investigation of the murder mystery.

With secret desires, backstories, lies and hidden truths, all the characters in the film has their own motive to kill Raghubeer. Radha who was getting married to Raghubeer was in an abusive relationship with him. Vikram is to be blamed equally who is after the business and family property. The political connections of Raghubeer are also scanned by Jatil Yadav among which Tigmanshu Dhulia’s charismatic presence is always suspected along with MLA Munna Raja played by Aditya Shrivastava of CID.

From a small flashback scene, we are aware that Radha and Jatil have met five years ago like strangers on a train. She would have jumped to death but was pulled back then. Five years ago, Raghubeer first wife was killed in a hit-and-run incident. Although the train sequence does not strictly narrate the relationship with the murder mystery, it tells us how the character of Radha was already on her way to be sold to Raghubeer by Radha’s father when Yadav had met her. She was miserable five years back and she is miserable now. The sequence also suggested that something is common between Radha and Yadav, where Radha is one who falls into trouble every time and Yadav is one who saves her.

Raat Akeli hai is two hours and forty minutes long film which places every plot and sequence perfectly. With every new puzzle, the story gets juicer. The movie explores corruption, violence and relationship between state and police. Politicians and their associates are not spared by Yadav who is determined to solve the murder mystery and find the criminal no matter how many efforts he has to make.

There are other slight moments also in the movie to maintain the curiosity in the audience and keep them entertained. For instance, the quest for a perfect bahu by Yadav mother. The only issue is Yadav ‘rang is not saaf’. However, he need not worry about it. Nawazuddin mother assures that when Ajay Devgan has gotten a beautiful wife, he will too get one and slips him some fairness creams.

The entire movie will keep you hooked up until the real thing happens in the end. Yadav is able to crack the mystery finally and you can realise the reason behind the murder is not the main theme of the film. It is not important to know who killed Raghubeer rather it is more significant to know why he was killed which becomes the centre point of the story.

Thanks to the brilliant cinematography which makes the movie entertaining enough with lights, sound and script. The murder mystery and the notion behind the killer and the victim is not the only part which makes Raat Akeli hai win audience heart. The credit behind the movie success can be given to the writer Smita Singh who worked hard to make the story plot light and equally written rather overwriting and filling it with boredom.

Finally, the performance of the actors as always takes the credibility to keep the audience engaged until the end. Nawazuddin is a quirky yet sincere police officer who is shown underrated and believable. Radhika Apte on the other side is flawless and spooky yet a vulnerable woman who has an intriguing history. Veteran Aditya Shrivastava and Tigmanshu Dhulia have an ensembled task that gives flavour and new depth to the film.

Other than this, Shweta Tripathi also has a few roles which meltdown the finale scenes. She performs her part exceptionally well. It seems that Shweta was hired for just one awesome scene as she is one of the actresses who never mess the things up!

Although this is the first movie directed solely by Honey Trehan, I would rate this movie no less than Anurag Kashyap’s film. The director smoothly glides in every character and weaves the story in the best fashion. The movie comprises of many complex scenes with twists and turns but we are able to grasp them due to simplicity shown in every character and film location.

Though Sneha Khanwalkar does a bit over with the music, overall, the music can be given some credit. At some point, I felt that instead of loud music, a violin or a piece of soft background music would have done great. Sukhwinder Charkheya, on the other side, does full justice with the storyline.

The first half of the movie is all set high and full of male charisma. Though the second half is when every female actor gets the limelight and come into the character of their own. Shweta Tripathi, Shivani Raghuvanshi and Padmavati does a very powerful additions to the thriller sequences.

In the end, Raat Akeli Hai can be given four out of five and can be said as a good whodunnit thriller. Although the dark undertone provides some darkness in the film, overall, it is intriguing to watch Raat Akeli Hai after a soft movie Dil Bechara online.