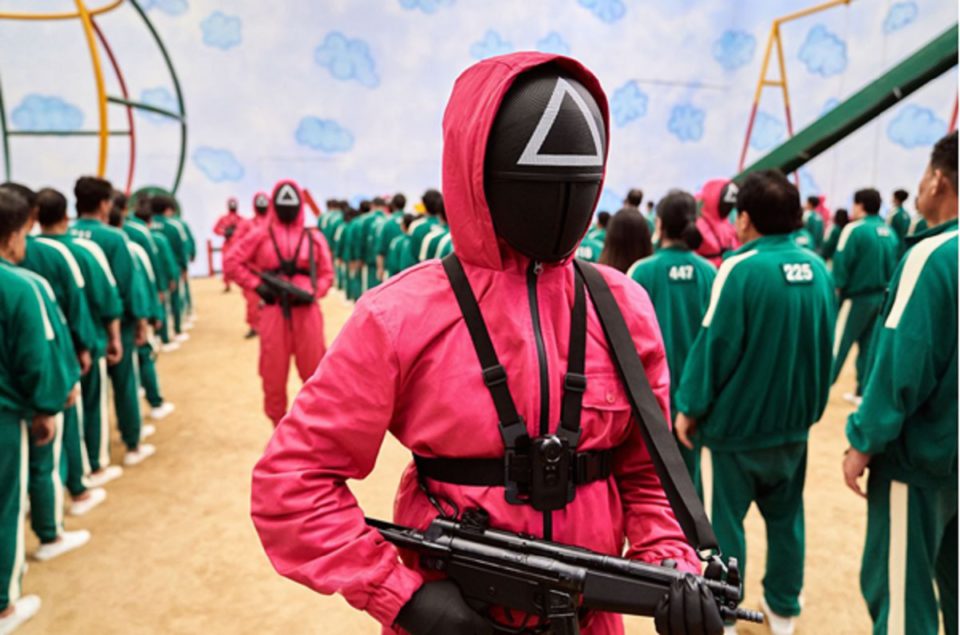 Right now, the most popular show on Netflix is a Korean show with an unusual name. Squid Game is a nine-episode K-series about a world where children’s games prove fatal, which premiered on Netflix on September 17. Squid Game is the very first Korean drama to achieve Netflix’s top place, and it did so just four days after its debut. It’s gory and brutal, but it’s also intriguing and binge-worthy.

Not only has it become Netflix’s most-watched show, but the audience has so far not stopped talking about it since its debut. It was released on September 17th, and in less than a month, it had broken Bridgerton’s previous record of 82 million views. Here’s all you need to know about the hugely popular show.

The Squid Game crime drama, developed by Hwang Dong-hyuk, is a competition between 456 people from all backgrounds, with a reward of KRW 45.6 billion (South Korean reward) (about 290 crore). The participants, who are all heavily in debt, compete in a series of some good children’s games in South Korea. The players are kept in a massive warehouse and are constantly watched by guards in masks and pink bodysuits while they play till they die. Each ‘death’ increases the winner’s prize pool by KRW 100 million.

A former investment expert, played by Park Hae-soo, who appeared in the 2017 Korean drama Prison Playbook, has stolen from his clients and is fleeing the police; and a North Korean refugee, played by Jung Ho-Yeon, who will go to any length to bring her remaining family across from the North. Each participant is in a state of extreme despair, and that is what drives them to play the fatal game.

How does ‘Squid Game’ end?

In Squid Game, the ultimate competition is based on the series title. It is indeed a game Gi-hun and his adversary Sang-woo played as kids. Sang-woo tries to keep Gi-hun from entering the court, which is fashioned like a squid and going to the circle that is intended to be the squid’s head. Gi-hun wins when he reaches the circle.

However, in this version, things quickly go violent. Sang-woo and Gi-hun are fighting to the death. Gi-hun chooses not to murder Sang-woo just as he has him pinned to the ground. He suggests that they agree to exit the game jointly, with no prize money and no lives at stake. Sang-woo, on the other hand, does not want it all to be for naught. He’s already on the verge of death, so he knifed himself in the neck.

As a result, Gi-hun is declared the winner, and he receives a large sum of money. Regrettably, he also leaves behind the memories of the heinous games he engaged in to obtain that money. And after seeing hundreds of fatalities in a few days, Gi-hun seemed to be irreversibly scarred.

What does the ‘Squid Game’ end mean?

But not everything is lost for our valiant hero. He receives a card from the Old Man, the game’s inventor who posed as a player, a year after he returns home. He meets with him, and the Old Man explains the game to him, despite the fact that he is actually on his deathbed. He invented it decades ago as a means to pass the time when he and his super-rich buddies had run out of things to do. This year, the Old Man participated in the activities to recreate some of the childhood pleasure he had before money became a factor.

Gi-hun, understandably, wishes to assassinate him. The Old Man, on the other hand, suggests one final game. Given the horrific things he has witnessed in the players over the years, he claims he has lost trust in humanity. He puts all Gi-hun has on the line. The Old Guy claims that if a homeless man seen from a window on the street isn’t rescued within 25 minutes, he proves his point about humanity being gone and wins. Gi-hun will win if someone assists the man.

Someone eventually assists the homeless guy, but the Old Man passes away before seeing the event. However, the outcome of this game is critical to the Squid Game’s closing seconds. Gi-hun dials the number he has for the game’s Frontman as he prepares to board a plane to the United States to visit his daughter. The Frontman instructs him to get aboard the plane and fly away.

Gi-hun, on the other hand, turns around and appears to be planning to put an end to the games for good. As Gi-hun gets to the Korean terminal, he is proving the Old Man incorrect once more. He will sacrifice his own convenience and satisfaction in order to aid someone else, which the Old Man did not believe humans were capable of. The “someone” inside this scenario refers to the game’s next possible players.

Some lesser-known facts about Squid Game on Netflix

The Squid Game on Netflix is about a group of competitors who compete in games for a monetary reward.

The Squid Game is all about a group of broke captives, masked individuals in scarlet jumpsuits, and series of games you may have played in primary school. The South Korean show depicts individuals participating in violent games for money, and it has captivated viewers of all generations. It has resulted in record-breaking viewership, propelling Squid Game to the top of Netflix’s list of most popular series.

For ten years, the Squid Game show had no takers.

Although it may be difficult to imagine now, for several years, Squid Game was not everyone’s cup of tea. Local studios rejected Hwang Dong-Hyuk’s script for nearly a decade, claiming it was too vicious. Netflix just gave the idea it greenlights in 2019, but only as a series. “Round Six” was the initial title of the Squid Game.

The Squid Game was supposed to be a film initially

Hwang Dong-hyuk, the show’s creator, started working on it in 2008 with the intention of making a film. Several characters, such as police detective Jun-ho, and other elements were added after it became a series.

During shooting, the director lost not one but six teeth

Lest you believe the director was hurt while playing one of the show’s odd games, you should know that Hwang Dong-hyuk lost six teeth as a result of the stress of filming the series. “On my left side, I still don’t have two molars,” Hwang Dong-hyuk told a news channel. “I’ve been meaning to get implants but haven’t got the opportunity.”

The huge, laser-eyed doll from the show’s debut episode, “Red Light, Green Light,” isn’t simply a prop. You’ll have to travel to Jincheon County, a remote location approximately three hours north of Seoul, to view this eerie doll that spells doom on everything she looks at (just in the show, obviously). The huge doll stands at the entrance to Macha Land, a horse carriage museum.

The creators provided lots of Easter eggs for viewers to deduce what would happen next to the participants. Before it became viral, a TikTok user noticed the Easter egg. The dorm walls where the gamers wake up have artwork on them, according to the user. If you look attentively, you’ll notice that these paintings offer hints as to what games the captives will face.