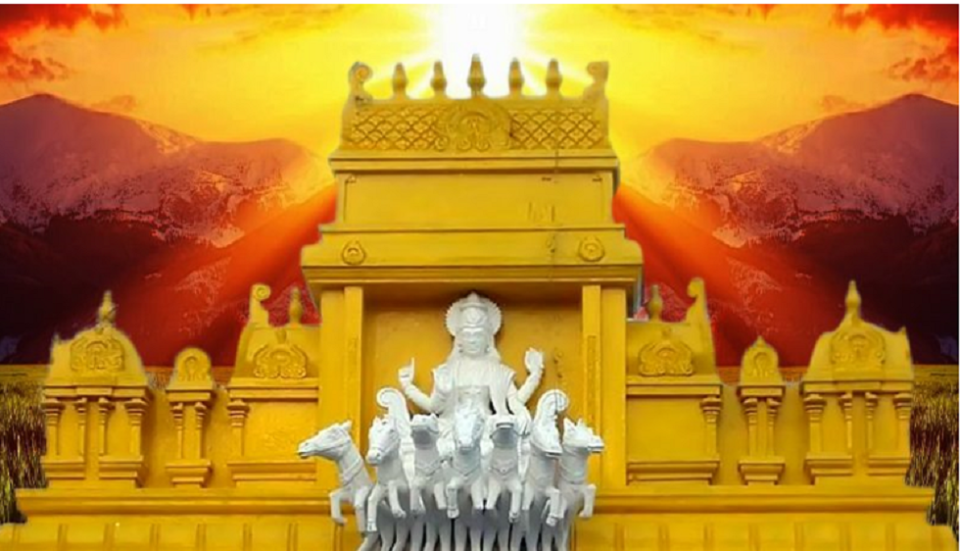 Built-in the 7th century, Suryanarayana temple in Arasavalli is one of the oldest temples in India that has been dedicated to Sun god. The temple is unique in Andhra Pradesh and is built in a rath or chariot style.

Each year, more than 1 lakh devotees visit Sun temple on Ratha Saptami day to offer their prayers to Lord Sri Suryanarayana Swamy. This year the Sun god temple has opened its gates and is all geared to celebrate the Ratha Saptami festival on 19 February.

The Sun temple in Arasavilli is famous worldwide due to its unique architecture. In between March 9-12 and October 1-3, the rays of the sun touch the idol directly during the sunrise. The temple in Srikakulam is the only one in India that has idols of Kurmavatara of Mahavishnu.

When is Ratha Saptami celebrated?

Ratha Saptami is celebrated on the 7th day of Magha Shukla Paksha. It is believed that this day is the birth anniversary of Lord Surya or the Sun God. Ratha Saptami is also known as Surya Jayanti or Arogya Saptami. Sometimes also known as Achala Saptami, this day is celebrated in the months between mid-January and February every year. Ratha Saptami usually falls on the 2nd day after the celebrations of Vasant Panchami or Shri Panchami.

What is Ratha in Ratha Saptami festival?

Ratha means chariot. On the day of Magha Shukla Paksha Saptami, we worship Sun god who drives a golden chariot driven by seven white horses. The glory of Sun god and his chariot is not limited to celebrating Ratha Saptami but is extended far more than it. Various temples all over India has been built to honour Sun god. All the temples having Lord Sun’s idol celebrates Ratha Saptami each year. One of the famous temples in Sothern India is Tirumala Tirupati Balaji temple that makes special arrangements to celebrate Ratha Saptami. The festival holds a special place in many Indian states like Maharashtra, Karnataka, Andhra Pradesh and Tamil Nadu.

This year, Ratha Saptami will be celebrated on 19th February. The Snan Muhurat or appropriate time to take bath on Ratha Saptami day is between 5:14 AM to 6:56 AM.

It is well-known worldwide that Lord Surya is hailed as a deity visible to every human eye in the form of the sun. Lord Surya is one of the Hindu Gods mentioned in the Vedas and is the oldest scripture ever known to mankind. Vedas are also known as Apaurusheya which means not created by any human being. Therefore, Vedas plays an important role in the lives of people.

According to Hindu mythology, Surya was the son of Sage Kashyapa and Aditi. He was born on Saptami Tithi in Magha Shukla Paksha. This is the reason Ratha Saptami is celebrated on this very day i.e., Surya Jayanti.

The devotees of Lord Surya pray to the Lord for sustaining life on earth. On the Ratha Saptami day, people rise early and take a bath during the sunrise. This ritual is very important on Ratha Saptami. It is believed that by taking a bath early morning in a sacred river on this day, one can get rid of their sins that have been committed due to words, intentionally, unintentionally or through actions in the present or previous life. Other than this, one can maintain good physical life and keep diseases at bay by taking bath early morning and offering prays to Sun god on the auspicious day of Ratha Saptami.

After taking the ritualistic bath early morning on Ratha Saptami day, devotees offer Arghya or water to Sun god. They hold Kalash or an earthen pot in their hands that is filled with water and pours it gently tilting towards Sun God and chant mantras. After giving Arghya, devotes offer ghee or oil lamp, incense, red flowers and ignited camphor to the Sun god.