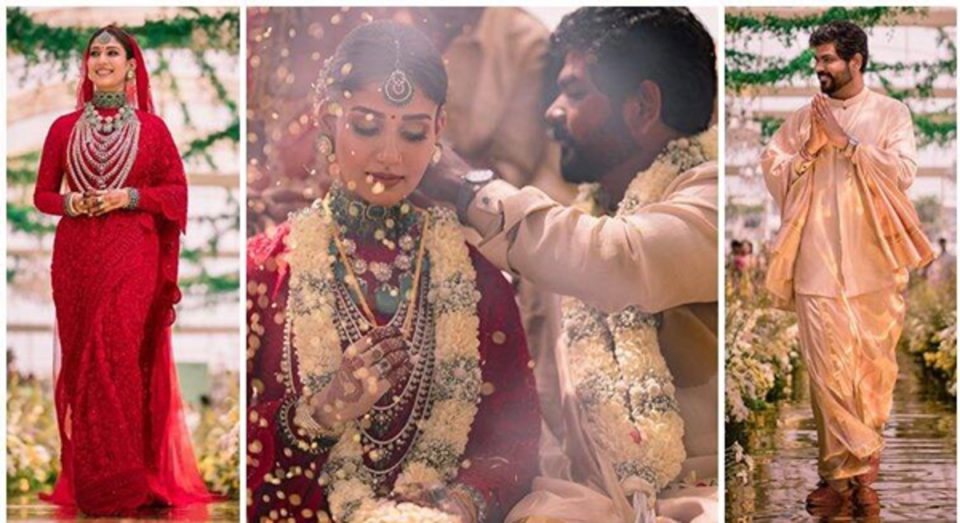 Nayanthara is one of the Tamil superstars, best known for woman-centric movies. When Vignesh Shivan announced the marriage, fans have been flooding both the Tamil star’s social media accounts with messages and well wishes. The invites, pomp and show were all over the media after the wedding. The couple invited some of the Bollywood and Tamil film industry legends along with family members and friends including Samantha Ruth Prabhu, Chiranjeevi, Suriya, Ajith, Karthi, and Vijay Sethupathi, Kamal Hasan and Shahrukh Khan.

Vignesh has confirmed about the wedding on June 7 that the marriage was actually planned to be held at Tirupati. However, they have to relocate the wedding destination to Mahabalipuram. He said, “Initially, both of us wanted to get married in Tirupati. We had to change the venue from Tirupati owing to logistic issues. We wanted to call our friends and family members, and we can’t take everyone there. So, we have to decide to get married, here, in Mahabalipuram.”

Vignesh Shivan and Nayanthara had been dating since 2015 when they worked together for Naanum Rowdy Dhaan. The couple confirmed their relationship in 2016 at an award ceremony. Actors like Rajinikanth and Shah Rukh Khan who will be co-stars of Nayanthara in her upcoming movie Jawan were seen at the wedding. While Vignesh informed his fans about his wedding through tweets, Nayanthara shared a couple of pics from the wedding on Instagram. She captioned, “With God’s grace, the universe, all the blessings of our parents & best of friends. To New Beginning,”.

Nayanthara is one of the Tamil superstars who had been defining a force for feminism. She is known for her versatile acting skills, mostly in women-centric films. She loves playing the role of powerful women in Tamil, Malayalam and Telegu movies. In fact, she is the first south Indian actress who was listed on the Forbes India Celebrity List in 2018 when her total earning was estimated to be 15.17 crore rupees.

In an era when actors’ and actresses’ influence and success are verified with social media following, Nayanthara’s fame is organic and natural. She believes in connecting with audiences and hence, she selects movies very critically. Currently, the actress is working in Rajnikanth’s movie named Annette. In the movie, she will be portraying an older woman. She is also doing a movie with Vijay Sethupathi Kathuvakkula Rendu Kadhai. Post these movies, Nayanthara has decided that she will act in woman-centric movies only in future.

The beautiful actress has done women-based movies earlier also like in a psychological thriller Immanikka Nodigal in 2018 where she plays the role of an IPS officer. She played a single mother role in Maya and a district collector taking on political leaders in 2017’s Aramm. Now, she is been producing movies under the banner Rowdy Pictures which she had co-founded with her husband Shivan. Although she has bagged a vast number of projects, she seems hungry for more saying that “I can never reach a stage where I feel like I have done everything,”.

Vignesh Shivan and Nayanthara fall in love with one another during the shooting of Naaum Rowdy Dhaan in 2015. The couple officially announced their wedding in 2021 and got married on 9th June 2022 in Mahabalipuram. Vignesh is the son of two police officers. While his father worked as a superintendent, Vignesh’s mother was an inspector in Vadapalani. Vignesh completed his studies at Santhome Higher Secondary School. He was a junior of Simbalarasan TR in the school and hence, he was able to make his first debut in Podaa Podi.

Although we know that Vignesh is a film director, he is also a great writer, actor, prouder and lyricist. During his struggling days, Vignesh used to do cameo roles in movies such as Sivi. He had penned many songs for the south Indian film industry as well.

Vignesh Shivan and Nayanthara although fell in love during a film shooting, it happened coincidently, as reported by the actors. Vignesh never approached Nayanthara for the role but took her after casting various others before selecting her. He along with Nayanthara has established a production house named Rowdy Pictures. Vignesh’s upcoming movies include Kaathu Vaakula Rendu Kaadhal starring Vijay Sethupathi, Samantha Akkineni and bae Nayanthara, and an untitled film with Sivakarthikeyan.