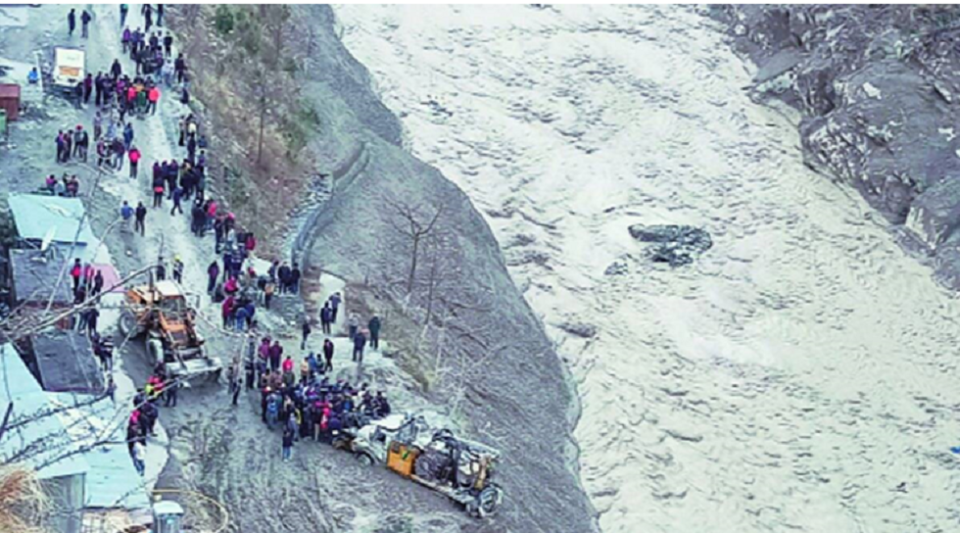 Almost 150 people are reported missing and seven dead bodies have been recovered from Uttarakhand’s Chamoli district. One key bridge and two hydropower projects have been damaged severely by a flood-like situation that took place due to a glacial breach surging river in Uttarakhand’s Chamoli district. On 7th February 2021 Sunday morning, many labours went missing from the project sites along with 30 staff as reported by two police personnel. According to Trivendra Singh Rawat, as close as 35 people were trapped in a tunnel which was blocked by debris at an under-construction site near Tapovan area, NTPC project which is 5 km downstream of Rishiganga. Although many have been rescued, we are still searching what caused the sudden surge of water: a glacier lake burst or an avalanche?

What caused the sudden surge of water near Chamoli in Uttarakhand?

The recent disaster caused near Chamoli has made scientists unsure about the sudden surge in water. The exact cause behind the flood is been analysed in various ways. It could be either a glacier lake burst or an avalanche but one thing is for sure, the climatic impact or development must have triggered the unusual surge in water that swept away many lives with it. It is said that the incident which took place early morning on 7th September 2021 made people remember the 2013 disaster in the state.

Although the disastrous flooding receded by the evening, it caused major destruction in the area. Soon after the incident, the scientists decided to travel to the affected areas, and travelled the high mountain peaks of northern Chamoli to find the root cause behind the incident and whether more flooding is expected or not. The scenario was given the name GOLF, glacial lake outburst flood by the glaciologist which means flooding caused because of a breach in the glacial lake.

Reasons behind the sudden surge in water in glacial lakes

Like many Himalayan ranges, retreating glaciers are caused because of the formation of lakes at the mountain tips, often called as proglacial lakes. They are bound by boulders and sediments only which makes them prone to any slight movement. When the boundary of these lakes is breached, they can release a huge amount of water in a moment that ultimately rushes downwards to the nearby rivers and streams. When receding, they gather sediments, stones and any material that comes on their way and results in floods downstream.

GOLF incidents are unusual but their impacts vary according to the proglacial lake size and density of the water level along with the location of the glacial lake. The sudden breach can be caused by many ways such as an earthquake or water overflow due to heavy rain. In Uttarakhand’s case, an avalanche was reported in the area two days ago the incident. According to a glaciologist at the Hemwati Nandan Bahuguna Garhwal University in Srinagar, Professor H C Nainwal, “We don’t know of any big glacial lakes in this region. An avalanche is quite common, and there could have been one, but an avalanche on its own would not result in an increase in the flow of water in the river. The water has to come from a source, and as of now, we do not know what this source is,”

What happened in 3013 in Uttarakhand?

In 2013, a similar flood was encountered by people living in Uttarakhand. A massive flood swept away lives of as many as 800 people in Kedarnath and Badrinath regions. More than 2000 homes were destroyed along with 147 bridges and 1,300 roads. The following year, a climatic change management program was initiated by the state government with certain inputs from UNDP, United Nations Development Programs to manage climate change impacts in the surrounding regions of Uttarakhand. This is because the terrain and topography of Uttarakhand make the region highly vulnerable to such destructions. The entire area is very fragile environmentally with almost 71 per cent of the entire area under forest. Infrastructure work is already under the progress such as highway construction but a more balanced plan is required that can consider ecological realities.

The Chamoli incident that took place in February 2021 is a wakeup call for everyone, particularly in India to get serious about the climatic change. We need to adapt to developmental ideas that can address climatic disorders causing disastrous incidents like Uttarakhand.