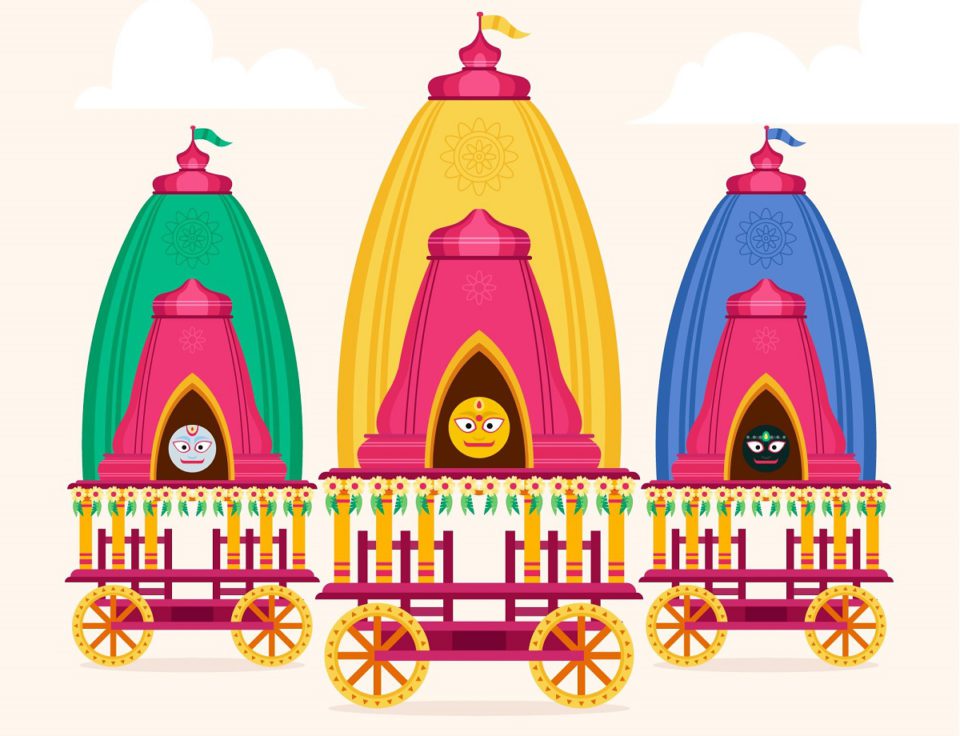 One of the chariot festivals held annually in Puri, Odisha that attracts thousands of pilgrims from all over the world is Rath Yatra. It is perhaps the largest car festival in the world, and it is also organized by Jagannath temples all over the world. On the day of the festival, Lord Jagannath, sister Subhadra and elder brother Balabhadra visit their aunt’s place each year on three magnificently decorated Rath or chariots. The chariot ride is followed by pomp and shows that start from the Jagannath Temple itself.

The festival falls on the second day of the Hindu calendar month Ashada Shukla Paksha every year. Rath yatra will begin this year on Friday, July 1st. The three statues will be cleansed, groomed and transited from the Jagannath temple to the Gundicha Temple in the ceremony. This is the time when Puri prepares itself for visits made by thousands of devotees who gather together to witness the great possession and enjoy the remarkable experience.

One of the most awaited and grandly celebrated festivals in India is Jagannath Rath Yatra. The festival is dedicated to Lord Jagannath, his elder brother Lord Balabhadra and sister Subhadra. The festival is also known as Dasavatara, Gundicha Yatra, Navadina Yatra or Chariot Festival. Every year, it is celebrated either in June or July as per the Hindu calendar date. Sometimes, the number of pilgrims count reaches beyond 4-5 lakhs. Many international and national travellers flock into the city to get a glimpse of the Lord placed in the chariot. It is believed that the ones who get a glimpse of the Gods would be blessed with prosperity.

Three beautifully drawn chariots depicting temple constructions are carried through the streets of Badadanda in Puri to start the Yatra. Worshippers from all over the globe gather at Puri with a sincere desire to assist the priests and other devotees in pulling the Lords’ chariots. Many may even risk their lives in the mass to serve the Lord, seeing it as a religious act. This is the one day of the year when devotees who are not permitted to enter the temple, such as non-Hindus and foreigners, can see the deities outside the temple. The yatra is accompanied by musicians and singers who play devotional songs, trumpets, tambourines and other instruments to make the way more vibrant.

The carts of the Lord are around 14 m high and pulled by thousands of people who have gathered to participate in the grand event. The distance from the temple to the Lord’s aunt’s place is about 3 kilometres. However, a huge crowd makes this yatra time taking. When reached, all the three deities are placed in the temple for nine days. Pilgrims are allowed to get a glimpse of the god before taking them back to the Jagannath temple once again in a similar fashion. The return journey is called Bahuda Yatra. When the possession is back, it halts at the Mausi Maa Temple i.e., Lord’s aunt’s abode. The deities are served with Poda Pitha, a sweet pancake. This is said to be a poor man’s food and a favourite of Lord Jagannath.

The chariots, or ‘Raths,’ are the main point of the ceremony in Puri. 3 key chariots convey three deities who are present during the festival. The three chariots are all constructed of wood and have been hand-painted by local artists. The chariot of Lord Jagannath is the largest of the three, with 16 huge wheels and an elevation of 44 feet. Lord Balabhadra’s chariot has 14 wheels and is 43 feet tall, while Goddess Subhadra’s chariot stands 12 wheels and stands 42 feet tall. During the rath yatra, Lord Balaram’s chariot is pulled first accompanied by Goddess Subhadra and thereafter Lord Jagannath’s rath.

Among the three, the first chariot in the Nandighosa Rath is in which Lord Jagannath is placed and accompanied by Lord Madan Mohan. The rath is guarded by none other than Garuda while the charioteer is Daruka. The Rath is covered with red and yellow decorative clothes since they are believed to be the colours liked by the lord the most. This rath is also known as the Garuda Dhwaja Rath or Kapila Ratha which holds many deities including Gopi Krishna, Narayan, Rama, Rudra and Hanuman.

The second chariot is called the Taladhwaja Rath. In this rath, Lord Bala Bhadra is placed accompanied by Lord Rama Krishna. This chariot is covered with blue and green clothes. Basudev is the guard of the chariot and the charioteer is Matali. This chariot also holds other deities including Natamvara, Ganesh, Hatayudha, Kartikeya and Pralambar.

Among the three, the third chariot or the Darpadalna Rath is the smallest. This one belongs to Lord’s sister Goddess Subhadra. The chariot is decorated with Black and red coloured clothes while guarded by Jayadurga. Arjuna is the charioteer of this rath that caries other deities also such as Varahi, Chamunda, Vanadurga and Chandi.

The sacred temple dedicated to Lord Sri Jagannath is located in Puri in Odisha. The temple is one of the most visited temples in India and was built in the 11th century by King Indradyumna. The main deity in the temple is Lord Jagannath who is another form of Lord Vishnu. The temple is sacred to Hindus and included in the Char Dham Yatra along with Rameshwaram, Badrinath and Dwarka. Along with the temple’s main deity shrine that rises high, you will find various small complexes in the temple premises dedicated to Hindu gods and goddesses.

Architecturally, the temple is built in the Oriya style. The temple covers an area of around 4,00,000 square feet and is 20 feet high. You can see a wheel on the top of the temple which is called Nila Chakra or the blue wheel. The wheel is made of many metals and each day, a different flag is hoisted on the chakra. The temple gates are carved beautifully while the pillars are decorated with paintings and flowers. The Mahabhog or the Mahaprasad offered to the devotees in the temple is something you must not miss. It tastes delicious and is prepared in one of the largest kitchens in India. Food is prepared in earthen pots in the same way it was thousands of years ago. Interesting rituals, vibrant atmosphere and vigour are something that allures tourists and devotees greatly.

How to reach Puri

Air: If you want to travel to Puri, you can reach to the nearest airport that is in Bhubaneshwar. The Biju Patnaik airport is just 56 km from Puri and is connected to major airports in India like Mumbai and Delhi. International travellers can connect from Delhi or Kolkata even.

Train: Puri has its railway station which is connected to many cities in India.

Road: if you want to visit Puri by road, you can travel to Kolkata, Bhubaneshwar or Cuttack. Many buses and car services are also available from nearby regions.

Mumbai Travel Guide: Top Things to do in Mumbai