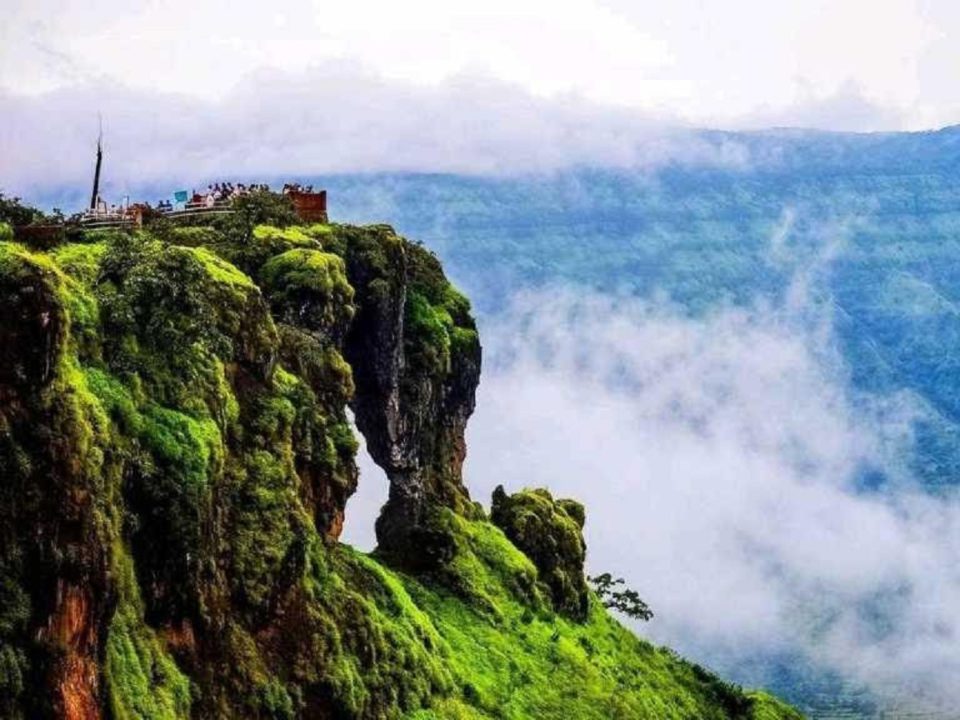 Mahabaleshwar is one of the most popular hill stations in Maharashtra and the Sahyadri Mountains as a whole. It is more popular among visitors from Mumbai and Pune for weekend getaways. Mahabaleshwar is blessed with natural beauty, picturesque views and landscapes, thereby regraded as a nature lover’s paradise too. If you are planning to visit Mahabaleshwar, plan your visit from December to March when the weather is more pleasant. For the itinerary, you can have a look at the below list to choose from when visiting Mahabaleshwar.

Mahabaleshwar temple is one of the ancient Lord Siva’s temples is situated in the Satara district of Maharashtra. The temple is revered as an important Hindu temple and was constructed in the 16th century during the Chanda Rao More dynasty. The temple resembles Hemadanta architectural style and is also known as Dakshin Kashi by the pilgrims. The sanctum has a 1500 years old Atma Lingam and Para Lingam which is believed to be built by themselves.

In the Satara district of Mahabaleshwar, this is one of the significant forts in Maharashtra due to historical facts and grandeur. The fort architecture is excellent and stands 3500 feet from the ground. Shivaji Maharaj commissioned it in the 16th century to assist the Maratha Empire in South India. There are four lakes, a Bhawani temple, a watchtower, a library, and a library in the fort.

Elphinstone Point, explored by Rd. Murray in 1830, is one of Mahabaleshwar’s highest points of view. It is approximately 3.21 kilometres from Arthur’s Seat and provides a magnificent view of Pratapgad Fort, Koyna Valley, and the greenery. This magnificent vantage point is located around 2500 feet above the Koyna Valley and serves as the headwaters of the Savitri River. A nearby historic mansion was also unearthed, but it was in no situation to be rebuilt. You may spend your day savouring the ethereal natural beauty of Mahabaleshwar while absorbing the breath-taking panoramic views from the cliff.

One of the natural rock formations of the extended ridge in the Sahyadri Mountain range that looks like an elephant trunk and head is known as Elephant’s Head Point. Not only does this tourist spot offer panoramic views of the surrounding mountains, but it also offers an amazing view of sunrises and sunsets. Since this place faces extreme climatic conditions, you may see almost nothing during summers while in monsoon, the entire place looks green and verdant.

Around 6 kilometres away from Mahabaleshwar beside the Lingmala forest bungalow, Lingmala Waterfall is a lovely water cascade. There are two waterfalls among which one is around 600 feet tall while the smaller one is just a few minutes walk away. Since the bigger one is unsafe for swimming, most tourists enjoy water sports in the smaller one. You can even trek to the main waterfall from the city to add more fun and adventure.

Venna lake is a man-made lake that was built in the 18th century by a decedent of Shivaji Maharaj, Shri Appasaheb Maharaj. The lake was built to ensure the residents of the town had adequate access to water. Mahabaleshwar’s Venna lake is one of the most popular picnic spots due to its natural beauty. Near the lake, you can participate in adventurous activities such as boating, horseback riding, or camping.

One of the popular viewpoints of Mahabaleshwar, Arthur’s Seat is also called the Queen of Points and Madhi Mahal. This viewpoint offers enthralling views of Bhrama Aryana forests and the Savitri River. According to folklore, Arthur Malet is the person after whom the point has been named. He used to stare at Savitri River for long hours while he mourned his daughter and wife’s loss. Due to their deaths in the river, this point is sometimes referred to as Suicide Point. Many travellers would trek to this point following other spots such as Hunter Point, Window Pont, Tiger Sprint Point and Malcolm Point. This point is also famous for its anti-gravitational phenomenon in which light objects that are thrown in the valley afloat and sometimes sent back upwards.

Wilson Point is the highest point in Mahabaleshwar that was originally known as Sindola Hill. This place is more popular as ‘Sunrise Point’ as you can watch both sunrise and sunset from this point. With three watchtowers, you can explore the entire forest area or enjoy time with family at nearby picnic spots.

Yet another revered Hindu temple dedicated to Lord Shiva located above the Panch Ganga temple is the Krishnabai temple that overlooks the majestic Krishna Valley. The temple houses Shiva Lingam along with a stone carved cow with water coming from the mouth (Gomukh). This point is known as the starting point of the Krishna River, and hence the temple is named so.

You must have heard about the strawberries of Mahabaleshwar. Kishore Vora founded this plantation in 1959, and it is currently owned by Mapro. The park also has a chocolate factory which is explored by tourists enthusiastically. Apart from it, you will find a small children’s park, nursery and an eatery that makes Mapro Garden an idle place to spend time with family and friends.

Panch Ganga temple was built in the 13th century by King Singhandeo. The temple is built with black stone and is situated at the confluence of 5 holy waterbodies – Gayatri, Krishna, Koyna, Veena and Savitri. The water collected in the temple kund is considered auspicious by the Hindu’s and even consumed as Prasad by the devotees. Though you can visit this temple at any time of the year, it is usually crowded with pilgrims during the monsoon season.

Helen’s Point, close to a major market, is an enchanting viewpoint in Mahabaleshwar known as the ‘Blue Valley.’ From here, one can see the vast lush valleys and spectacular waterfalls tumbling down the Sahyadri range. The picturesque view of the Krishna River running through verdant fields dotted with little houses provides a bird’s-eye view of Mahabaleshwar’s rustic settlements. Gavalani Point, Robbers Cave, and Northcote Point are all famous tourist spots near Helen’s Point.

One of the most important tourist spots in Mahabaleshwar is Dhobi Waterfall situated near Petit Riad. The waterfall is like a natural paradise for humans as they can envisage the water flowing directly into the Konya River.

Rajpuri Caves in Satara district near Panchgani is another religious site where Lord Shiva along with his son Kartikeya performed rituals to serve penance. Pandavas have also sought shelter inside this cave during exile. You will find ancient inscriptions on the cavern walls along with the Nandi statue that adds to the attraction. The cave has several holy ponds that have water with medicinal properties. This place is usually flocked by historians and archeological experts apart from pilgrims to offer prayers at the Karthikeya temple.

Babington Point is located at an elevation of 1200 metres and provides panoramic views of the Solshi and Konya Valleys. You can also enjoy trekking to reach this viewpoint while walking through the meandering paths. This place also has some exotic bird species and thus many bird-watchers visits this place during monsoons.

Asia’s Second Highest Mountain Plateau and the highest point in Panchgani, Tableland is a volcanic plateau and popular tourist attraction site. The land here is blanketed with laterite rocks that offer a stunning view. You can enjoy sports activities here like trekking, horse riding and toy train ride.

This viewpoint was once regarded as an important gathering place for the Parsis and thus named so. This place is idle for photographers. For adventure seekers, there are activities such as camel rides, paragliding, skydiving and others to keep them engaged.

Velocity Entertainmentz is a popular recreational park in Mahabaleshwar which is built 1200 metres above sea level at the Sahyadri Range. This place has the only Go-Kart track in India and is idle for adventure seekers. You can visit this place with family and friends to enjoy adrenaline-pumping games like go-karting, bungee trampoline and air hockey among many others.

Tapola is a satellite village in Mahabaleshwar which is also called the Mini Kashmir of Maharashtra. A forest surrounds the village and there are pristine lakes as well. You can participate in jungle safari explore undiscovered islands or trek to Vasota Fort nearby. Shivsagar boat ride is equally popular in Tapola as it lets you explore mesmerising nature closely.

Lodwick Point is another beautiful viewpoint in Mahabaleshwar that offers views of surroundings and the cityscape. Previously, this place was known as Sydney Point until one of the British Officers named General Lodwick explored it. The head of the General is sculpted in marble on the Pillar base. From this point, you can view Elphinstone point and Pratapgarh fort easily.

Also called Sunset Point, Bombay Point is one of the most visited places in Mahabaleshwar. This place is idle for a day excursion or picnics. You can also indulge in activities like horse riding or enjoy local food like Vada pav.

A popular picnic spot and nature lover’s paradise, Connaught Peak is situated 1400 metres above sea level. Parsani, Krishna Valley, Pratapgarh Fort, and Venna Lake can be viewed from here. Many trekkers trek to Connaught Peak to envisage the beautiful sunrise and sunset with Sahyadri ranges in the backdrop.

Yet another one of the most visited places in Mahabaleshwar is a cascading waterfall that attracts adventure seekers, and nature lovers from all around the globe are Chinaman’s Falls. Since the Chinese looked after the nearby grounds in the past, this fall has been named so. Rejuvenate amidst scenic landscapes or enjoy bird watching when you visit Chinaman’s Falls in Mahabaleshwar.

‘City Of Palaces’- Here Are Best Palaces in Mysore

Best places to visit in Kerala for Honeymooners and Vacationers