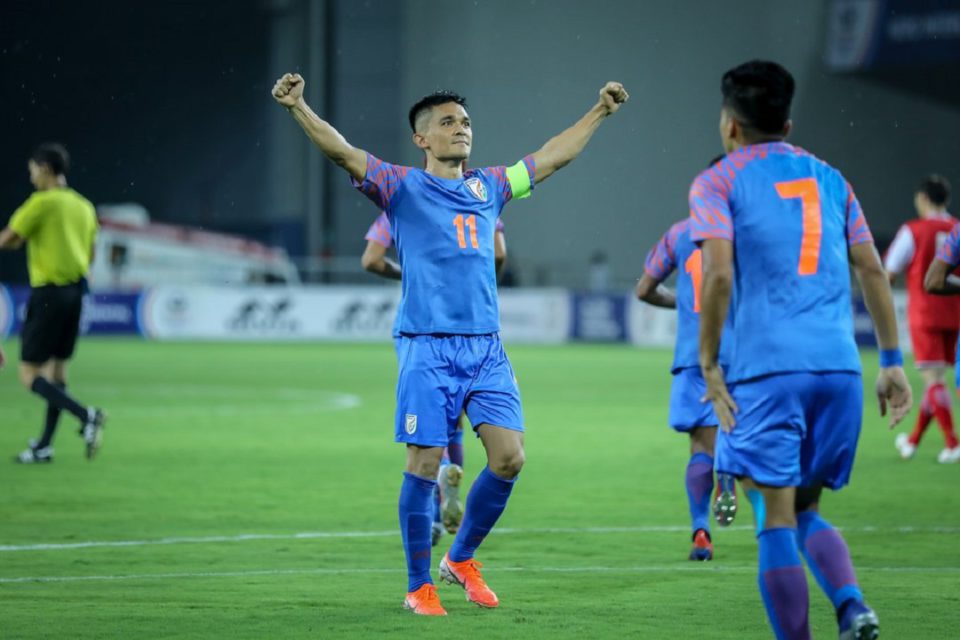 Sunil Chhetri is one of the Indian footballers widely recognized as the greatest Indian player of all time. He plays for the forward and captaincy in India National team and Indian Super League club Bangalore. In the international football world, Sunil Chhetri is the sixth-highest scorer. He is also the second joint-highest goal scorer, besides Lionel Messi and beyond Cristiano Ronaldo. Nonetheless, the journey from a common Indian boy playing in a narrow street to the second-highest active goal scorer and king of Indian football has never been easier for him. Let’s find out the interesting journey of Sunil Chhetri that made him the legend he is now.

Sunil Chhetri was born on 3rd August 1984 in Secundrabad. His father’s name is KB Chhetri and his mother Sushila Chhetri. Sunil Chhetri’s father is a retired officer who used to serve in the EME Corps of the Indian Army. His mother was an athlete too and played for the Nepal Woman’s National team with her twin sister. Sunil completed his schooling at Bahai School in Sikkim and graduated from Kolkata’s Asutosh College. He has a sister named Bandana Chhetri.

The Indian men’s national football team captain received the Major Dhyan Chand Khel Ratna Award on November 13, 2021, by the honourable President of India. The Ministry of Youth Affairs and Sports had mentioned Sunil Chhetri’s name earlier and recommended his name for his contributions to the Indian football team at the national and international levels.

Sunil Chhetri is the first footballer in India who had been awarded such a prestigious award. Since his early days in football, Sunil Chhetri have made many remarkable records. It earned him the country’s most prestigious awards in the sports field. On winning, Chhetri said, “I am thrilled, I am really thankful and honoured. I have always said that it is a dream that I have gone through, and it would not have been possible without my family, teammates and coaches I have played under,”.

Mohun Bagan Athletic Club is one of the oldest clubs in Asia that was established in 1889 when India was up in conflicts against then colonial rulers of Britain. Chhetri’s professional career in football started with Mohun Bagan after playing with the City Football Club of New Delhi. When his first season was completed in the club, Sunil Chhetri had already scored four goals for his team and secured the seventh position in the table. The next season was a little underplayed one and he could score only two goals. All the later seasons Sunil Chhetri played while in Mohun Bagan Club, he tried to maintain a good position in the team and scored goals due to his good attacking tendency.

After playing for the Mohun Bagan Club, Sunil Chhetri signed for JCT in 2005 to play in the 2005-2006 season. He scored three goals in the first and eleven in the next season when the club secured the second position after Dempo. He played many games for the JCT and outperformed most of them. Overall, he scored 21 goals in 48 matches for this Punjab based team.

Chhetri was on probation with the Kansas City Wizards of Major League Soccer in March 2010, and he had participated in several of their pre-season games. Sunil scored Eleven goals in five preseason games, impressing everyone with his capabilities. On March 24, 2010, he was officially signed by the team, making him only the third Indian player to play beyond South Asia and the very first Indian to play in the MLS.

Sunil Chhetri played against Manchester United, one of the most renowned football teams worldwide. He was selected as a substitute in the game and got to play. Even though he couldn’t make the net bloat, he had a handful of strong chances at goal, and the Kansas City Wizards finally won the game 2-1 against Manchester United. Sunil’s time with the MLS team, on the other hand, may best be described as unlucky, since he had to cut short his stay due to a call to National Duty. Sunil had no choice but to attend the National Camp for the Asian Cup, which was to be held in 2011. As a result, another great chance was squandered, and Sunil was forced to return to Indian soil.

Is India the Team to Beat at The T20 World Cup?