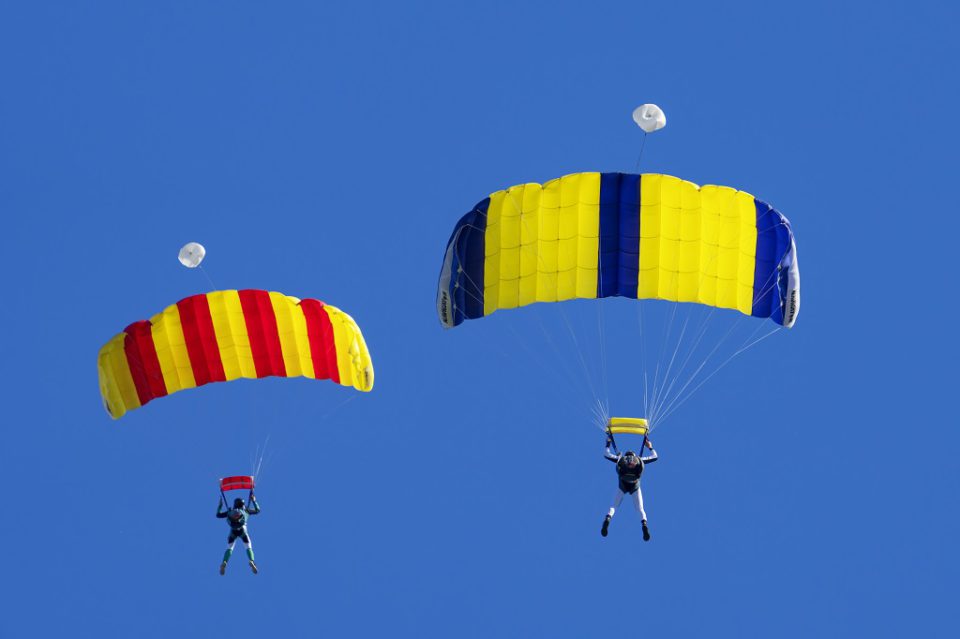 Many of humankind’s myths like Icarus, centre around hubris and harsh lessons in “flying too close to the sun”. But hey! Science is the new religion and these high – flying extreme sports enthusiasts are not using wax wings for parachutes. Skydiving is a very popular sport among those who want some kick and a rush of adrenaline through their veins. Some of the best places to skydive in the world are major tourist destinations just for the skydiving experience that they offer.

Skydiving is nothing but jumping from a height and landing on the ground with the help of a parachute. The parachute is an inseparable part of the skydiving process. The first use of a parachute in history was done by a Chinese prince who used a piece of clothing to escape fire and jumped out of the window of a high altitude room. The design of a conical parachute was given by an Italian architect, Franchesco di Giorgio Martini in 1470. This design of the conical parachute was later used by Leonardo da Vinci to develop his own version of the parachute.

The earliest parachutes used by the aviators were made of silk, the canopy itself was made of silk and the harness was made of cotton and they had only one parachute. After a while people decided, if they were going to jump out of an airplane voluntarily, they needed to have two at least two parachutes. Skydiving began before it was a sport. Skydiving was initially for pilots. It was a part of the formal training given to the pilots to make them ready for adverse situations like engine failure or damage caused to the aircraft during the course of combat. So initially, skydiving was performed by pilots whose aircrafts were no longer functioning properly. Though if we look more vaguely, the first act of skydiving ever was performed by a French man named Andre Jacques Garnerin, when he performed an aerial stunt of jumping out of a hot air balloon and landing on the ground safely with the help of a parachute.

If you find something you love, never let it go or alternately, do it as many times as humanly possible. These people took it quite literally.
In 2001, Michael Zhang accomplished a record breaking 500 jumps in less than 24 hours, he performed a jump roughly every three minutes from a height of just about 2,100 feet (a substantially lower and quicker jump than the standard 12,000 feet jump). One might have assumed that Zhang’s breakneck pace would be impossible to top.
But Jay Stokes of Arizona managed an impressive 534 jumps in 24 hours before returning to blow both his and Zhang’s personal best out of the sky with a face melting 640 jumps to set a new world record and he did this to celebrate his 50th birthday.

2. The highest skydiving record is held by a google executive:

Innovative minds always long to push the boundaries of possibilities and there are few better contemporary examples than the folks over at Google. Alan Eustace, a senior vice – president at the company, set a world record for skydiving by literally jumping from the stratosphere. Completing the dive from 25 miles high, over a period of roughly 15 minutes in 2014. His record breaking leap from over 1,35,000 feet beat the red bull sponsored record set by Felix Baumgartner, who jumped from 1,28,100 feet in 2012.
Alan Eustace broke the sound barrier after 31 seconds of freefall and hit his max speed at 822 miles per hour after just 51 seconds. To give that some context, a skydiver typically tops out at 120 miles per hour during freefall.

3. The youngest skydiver ever was only 4 years old:

There is absolutely no shortage of elderly people wanting to celebrate old age with death defying leaps. Fred Mac and Verdun Hayes have each marked hitting the big 100 by going skydiving while Armand Johns Row, set the record at the age of 101. But there are not many people on the other end of the spectrum fighting to break the record set by young Toni Stadler to jump from a height of 10,000 feet at the ripe old age of 4. This junior adrenaline junkie had apparently been begging his parents to let him partake in one of their favourite pastimes. Toni’s parents stressed that he made the decision himself and was in no way coerced.

There are plenty of urban legends of people surviving a skydiving accident in which the parachute fails. Truth is, there is no surviving the fall from that height without a parachute. Those who have survived these incidents have often had a parachute partially open, still slowing down the fall by some degree. But in 2016, Luke Aikins performed a truly parachute – less jump and also lived to tell the tale. Falling from 25,000 feet, this 42 year old who already had 18,000 jumps to his credit, guided his body toward a giant 30m by 30m (100 foot by 100 foot) flytrap net which was suspended high off the ground to catch him and he slowed down the speed of his fall with the help of compressed air cylinders. Now, that was a true leap of faith.

5. You can jump without a parachute, it is called Banzai Skydiving:

Luke Aikins parachute – less jump may have been the first of its kind but he was not the first to push the safety limits of this sport. The idea of a parachute – less jump, gave birth to a subcategory of the sport called Banzai Skydiving, which involves throwing the parachute out of the plane and diving after it. People typically wait just a few seconds but at the competitive level, people push that gap to the limits. Yasuhiro Kubo holds a record for a 50 second delay. Guinness Book of World Records editor Craig Glenday has called it the most dangerous record category. Stating that it is only allowed in the book since it is an example of a record where you put your own life at risk but no one else’s.

So if you want to try out the most adrenaline infused sport in the world and you have the guts as well as the knack for adventurous sports then go for it. Not everyone receives the opportunity to fly. Happy Diving!