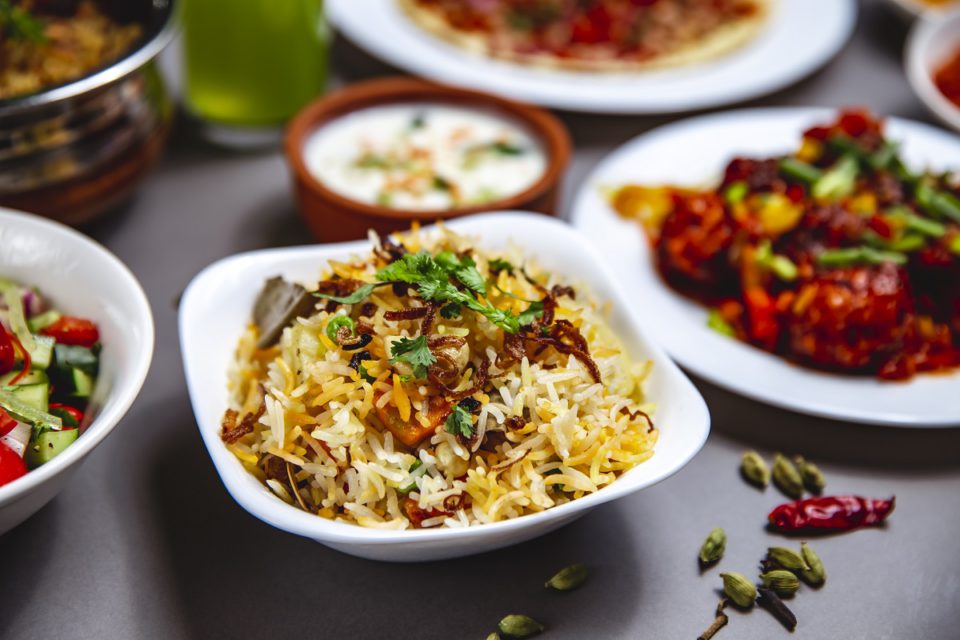 “Biryani” – The first thing that comes to mind is the aromatic smell while savouring it. Biryani is not only a dish but emotion to many people. You will surely find some hardcore Biryani lovers who can die for this delicious dish. When in India, this dish cannot be missed out at all. Every place has its own unique take and variation on this classic dish.

The arrival of this dish in India has a lot of stories, as some say that it was inspired by the Middle East while others say that Mumtaz Mahal was responsible for this dish. The originality of this dish has a lot of questions but today Biryani has evolved to be one of the favourite dishes and has been incorporated into the majority of cuisines of the country.

The dish is mainly made with a mix of aromatic rice, spices, meat and with a lot of patience. But the variety and process vary from place to place. Here are some of the different Biryanis to be found in India-

While talking about Biryani, we often hear or say that nothing can beat a Hyderabadi Biryani. Believed to be originated from the kitchen of the Nizams, this biryani is the most famous in the country. There are two types of Hyderabadi Biryani – Cooked ( Pakki) and Raw ( Kacchi).

The Pakki Hyderabadi Biryani involves cooking basmati rice and meat separately and then layering them together. While the kacchi Hyderabadi Biryani is made from the raw marinated meat placed between the layers of basmati rice infused with saffron, onions and dried fruits. Both the biryanis are slow-cooked in a dough-sealed earthen pot over a charcoal fire, which results in rich, aromatic and punchy biryani.

If you visiting Hyderabad, make sure to taste the Hyderabadi Biryani.

Originated from the Malabar region of Kerela, Thalassery Biryani, also known as Malabar Biryani tastes sweet and spicy. Not ordinary rice, but a special locally grown rice known as Khyma is used for this dish. Along with those spices grown in Malabar are used with some fried onions, meat, Ghee, fennel seeds, cashews and raisins.

Ambur Biryani is a popular dish among Muslims living in the northern part of Tamil Nadu. The dish is a part of the cuisine of the two neighbouring cities of Ambur and Vaniyambadi in the Vellore district. This biryani was introduced by the Nawabs of Arcot and is often served with sour eggplant curry ‘Ennai kathirikai’ and raita.

In this biryani, the usual meat is used like Chicken or Mutton as per the convince but the way the meat is cooked makes it different from other Biryanis. The meat is soaked in curd and flavoured with coriander and mint, and added to the cooked Seeraga samba rice, along with other spices.

Originated in Bidar during the time of the Kalyani Nawabs, Kalyani Biryani is often known as the ‘Poor Man’s Hyderabadi Biryani’. This biryani has the same taste and richness but with some cheap ingredients. Usually, buffalo meat is used along with spices, coriander and tomatoes which makes the taste a little bit tangy. It is sometimes called ‘Buff Biryani’ because of the use of Buffalo meat.

The preparation of the making of this biryani is the same along with the uses of the ground spices. But the use of small cubes of buffalo meat makes all difference. Even the fat to meat ratio in buffalo meat is much more than that of mutton or other varieties of meat.

Sindhi Biryani is originated in Sindh Province which is now a part of Pakistan. This then has evolved to become a significant part of Sindhi and Pakistani cuisine. The taste of the biryani is very exotic as it has all sorts of aromatic spices and flavours.

The dish is made with basmati rice, chopped chillies, roasted spices, mint, coriander leaves, onions, nuts, dried fruits, sour yoghurt and the most important meat. The use of sour yoghurt makes the dish piquant and aromatic. Some might also add plums and potatoes for more taste.

This Biryani is originated from the coastal town of Bhatkal, Karnataka but the preparation has been from the Middle East. But soon with improvisation, the dish has evolved to become one of its kind. Usually, in some of Biryani, the meat is marinated with curd to give that little sour taste, but here the meat is marinated with green chillies and onion masala mixture. After the biryani is prepared it is garnished with mashed onions, spices, garlic and curry leaves which is quite unusual. Also, no ghee or oil is used while preparing this dish.

Awadhi delicacies like kebabs, Kormas, Kailas are quite famous in the North Indian area. But nothing can be an Awadhi Biryani of that region. Awadh is an archaic name of the North-Eastern part of present-day Uttar Pradesh. And as it is a part of Muslim rulers, many Persian elements are found their way in the cuisine. The word ‘Biryani’ is derived from the Persian word ‘biryani’ which means fried before cooking and ‘birinj’ which is a Persian word for rice.

The Awadhi Biryani is made of plenty of spices while cooking the meat. Also, like the old-style the meat and rice are cooked separately and later they are layered together and cooked like in Dum style. This preparation is commonly known as Pakki Biryani. While the other one is Kacchi biryani where the raw meat which is marinated with spices is layered with raw rice and later both are cooked together.

When we plan to visit Kolkata, the first thing that we think to do is to try their authentic delicious sweet dishes and fish dishes too. But how can we forget about the very famous Kolkata Biryani, which is served with ‘Aloo’ (potatoes). Serving biryani with deep-fried Aloo has been a quiet debate for a long time as half of the people don’t like their biryani to be served with deep-fried potato. But that’s the USP of this dish in the capital city of West Bengal. Nawab Wajid Ali Shah, the tenth and last ruler of Oudh, who was on the throne from 1847 to 1856, is said to have brought the biryani to Calcutta in 1856. Adding deep-fried Aloo in the Biryani gives a lightly spiced and slightly sweet taste to the Biryani. For marinating the meat, they use nutmeg, cinnamon, mace, cloves, cardamom and yoghurt.

Enjoy a Slice of Scenic Beauty of Bastar While in Jagdalpur

The Safest Way to Pay at Online Casino Sites