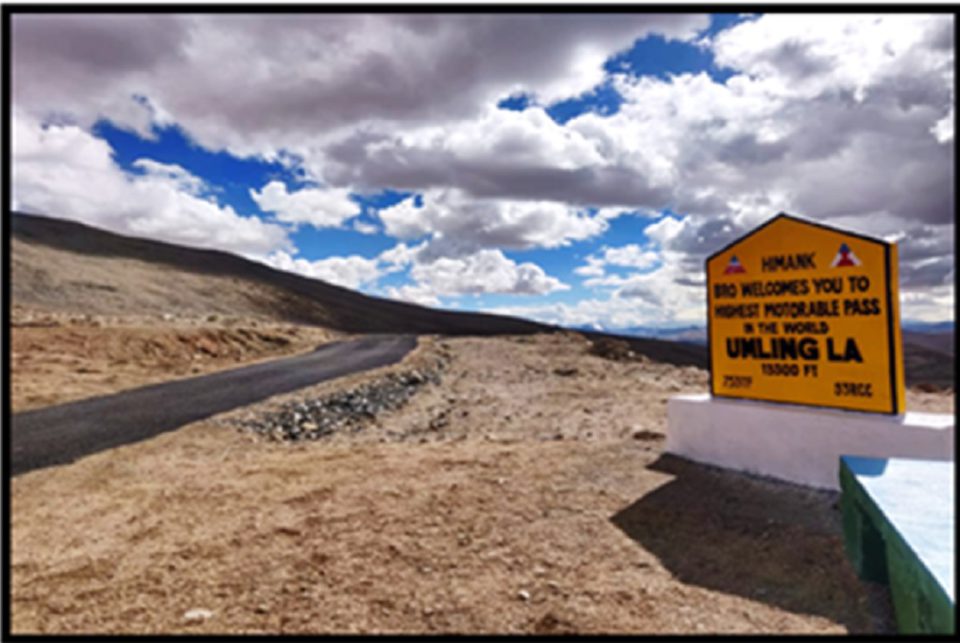 The highest road worldwide has been constructed by the Border Roads Organization in Eastern Ladakh at an altitude of 19,300 ft above sea level. The road is much higher than the base camps of Mount Everest. The southern base camp of Nepal is located at an altitude of 17,598 ft whereas the northern camp lies at 16,900 ft in Tibet.

We can say that Umlingla Pass is halfway to the commercial flights flying at 30,000 ft above the ground. Government officials said, “The road at Umlingla Pass constructed at an altitude of 19,300 ft betters the previous record of a road in Bolivia at 18,953 ft. Umlingla Pass is now connected with a blacktop road to enhance the socio-economic condition and promote tourism in Ladakh,”. Indeed, the infrastructure development team went through many harsh environments and robust terrains which made road construction challenging.

The road builders said that while they built the road, the temperature would often fall less than -40 degrees and oxygen levels fell below 50% than normal terrains. After making a world record, the BRO informed that this 52 km long tarmac road going through the Umlingla Pass beats the previous records of the road in Bolivia that connected to Uturuncu at 18,953 ft height.

Which towns are connected to the Umlingla pass?

The highest motorable road connects two major towns in Ladakh in the eastern Chumar sector. The road is like a boon for the locals since it offers a direct roadway connecting Demchok and Chisumle from Leh. The road can significantly enhance the socio-economic condition of the state besides promoting tourism. Other than Umlingla Pass we have one more world’s highest roads located in the state named Khardung La Pass at 17,600 ft.

The exact location of Umlingla Pass

While we search Umlingla pass in Google Maps, we may not find its exact location. Unfortunately, the pass had not yet received recognition from Google Maps. However, the exact location of 86 km Umlingla Pass is beside Demchok and Chisumle villages. The villages are in proximity to the eastern Indo-China border

Why you must visit Umling La Pass?

The surrounding areas of Umlingla Pass are barren and have no civilization or fertile land. When you travel through the road, you can feel the cold winds touching your face from all the sides at a fast pace. However, the mesmerising views of the Umlingla Pass may leave you spell-bound once you reach the midway.

Although the pass is beautiful, it is risky at the same time. You may experience an extreme rush when you move your car or bike at a high speed while your heart may beat faster than usual. Even if you overcome your fears to drive at an extreme height, the reduced oxygen levels may make you feel restless.

If you want to envisage enchanting views from the Umlingla Pass or seek to drive over the world’s highest road, you will have to select one of the three below paths. Each one provides a unique experience and views.

This is one of the routes that you can take from Fukche, Demchok and Koyul. The Demchuk village has been further divided into two parts. The division was made during the 1962 Indo-China War. To reach Ladakh, this route is considered to be one of the most beautiful routes. When you drive towards Umlingla, you get views that are a kind of surreal.

River Indus will accompany you all the way along with beautiful landscapes. The road also has Chinese influence on either side since the China border is just a few minutes walk away. To travel in this route, you will have to acquire special permits offered by the District Magistrate of Leh.

One of the most preferable routes to travel to Umlingla Pass is the Hanle-Photi La-Umlingla route. The route heads straight from Leh to Photi. Hanle is a popular tourist place where crystal clear skies offers enchanting views of Milky Way Galaxy. To travel in this route, you will require a regular permit.

The third route is also very interesting as it takes you directly through the second water crossing. You will not have to crisscross the first bridge. Moreover, this route requires a normal permit by state officials for travelling.

What is the best time to travel to Umlingla Pass?

If you want to travel to Umlingla Pass to get a look at the world’s highest motorable road, you must travel in the month of June. The road is open from June to October after which they are closed for civilians. During these months, you may not find scenic views due to extreme cold.

Best Places to Visit in India During Summer Holidays