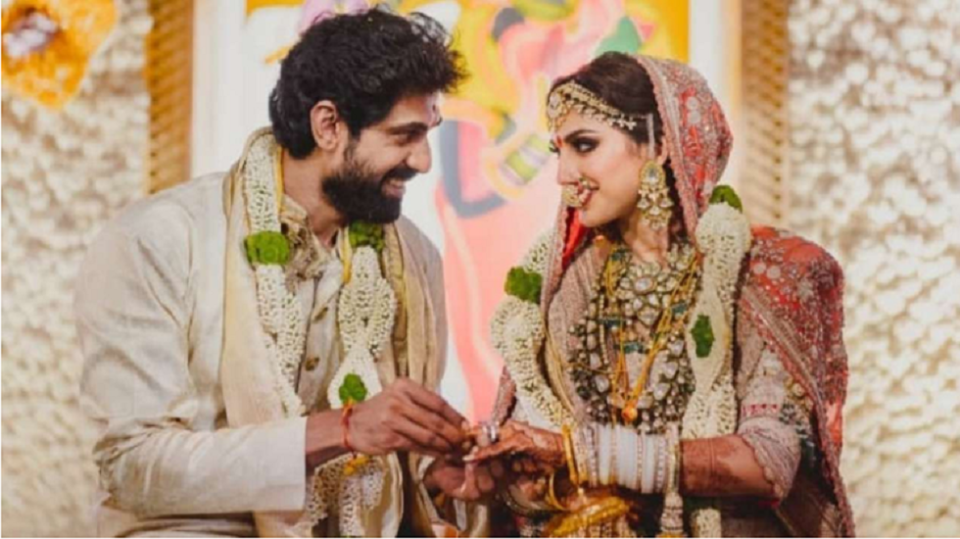 Our Heartiest Congratulations to the newlywed couple Rana Daggubati and Miheeka Bajaj..

The most awaited marriage of the year took place on Saturday night, 8th August 2020 when a handsome hunk got married to beautiful Miheeka Bajaj in Hyderabad. The marriage ceremony took place following every protocol warranted due to prevailing pandemic. The marriage place was equipped with face masks, sanitizers and disinfectant tunnels that were used by the guests. Social distancing protocols were also followed by friends along with the family members who gathered to bless the newly wedded couple. Some of the famous celebrities that attended the wedding include Ram Charan, Allu Arjun, Naga Chaitanya, Samantha Akkineni and Upasana. The street leading to the wedding ceremony and Ramanaidu Studios were filled with security officials.

Rana Daggubati no longer remains most eligible bachelor in the south Indian film industry. Bhalaldev of Bahubali broke the heart of many girls this year yet looked amazing in his grand wedding outfit. The couple were supposed to get married much earlier, however, due to COVID-19 pandemic, they postponed their wedding.

Rana Daggubati is well known as an actor, entrepreneur and a film producer. Perhaps, he is best known as Bhallaldeva due to his record-breaking movie Bahubali. Though his mainstream career in South Indian film industry as a producer started from 2004 after he produced a National Award-winning movie named Bommalata. He set up Spirit Media in 2005 which is a company dedicated to animation and VFX. He went for working with more than 70 movies as a VFX associator.

From 2010, his acting career started and soon he turned into a bankable actor. Every Telegu film producer wanted to hire him for their movies. He also worked with a few Bollywood movies like Dum Maaro Dum, though his acting career reached its pinnacle with Bahubali. The Gazi Attack was another successful movie which garnered Rana Daggubati with another National Award.

Rana Daggubati belongs to a family of filmmakers. When he is not busy with his acting, Rana Daggubati becomes an entrepreneur who shows his business interest in the media and entertainment industry. He entered into a joint venture with Kwan Entertainment which is one of India’s leading entertainment agency. He is also associated with Anthill Ventures that focuses upon the latest technology like Virtual Reality, Augmented Reality, Visual Effects, Artificial Intelligence and Internet of things, etc. You will be amazed to know that Rana Daggubati is a comic book lover. He had acquired a stake in India’s leading comic book firm named Amar Chitra Katha in the year 2019.

Do you know Rana Daggubati is blind from one eye?

One eye blindness faced by Rana Daggubati was in talks amidst town people for the last four years after the actor disclosed about his problem in one of the interviews. He revealed, “Should I tell you one thing. I am blind from my right eye. I see only from my left eye. The one you see is someone else’s eye which was donated to me after his death. If I close my left eye, I can see no one.”

What is motivating about the news is that he shared problems faced by him and motivated others who face blindness-related issues. He stated in a Telegu chat show, “There was a kid on the show whose mother had lost vision because of some tumour. I spoke about my vision problem to motivate them and tell them that LIFE GOES ON. I said it a long time ago and I never knew it will break out now.”

The ladylove of Rana Daggubati, Miheeka Bajaj was born and brought up in Hyderabad city. She owns an event management firm and a décor house company named as Dewdrop Design Studio. Miheeka Bajaj completed her diploma from Rachna Sansad in Mumbai which is an interior designing education centre and went for her master’s degree at Chelsea University of Art and Design located in London.

Miheeka Bajaj is highly interested in Indian art and architecture that made her choose a career in interior designing field. Miheeka’s parents, Suresh and Bunty Bajaj are the founders of a famous jewellery brand named Krsala jewels. Miheeka’s brother Samarth looks after the management and production department in Krsala. Miheeka Bajaj gives entire credit to her mother for what she is now and had once written in her Instagram post, “Everything Dewdrop Design Studio is today is because of you.. thank you for always being my strength! A girl is nothing without her mother!”

Regrading Miheeka Bajaj and Rana Daggubati relationship, Miheeka was the classmate of Rana’s cousin sister, Ashritha. Though they know each other for quite a few years, Rana and Miheeka were not into a relationship earlier. In May 2020 Rana Daggubati announced his marriage with Miheeka Bajaj and the families of the couple celebrated traditional Roka ceremony on 21st May. On 6th August, Haldi ceremony was celebrated followed by Mehendi at the Bride’s place.

Rana Daggubati and Miheeka Bajaj wedding location were made water-proof!

Since monsoon has reached its peak and every lane of Hydrabad city lashes with water, the hosts ensured that their wedding ceremony is not spoiled due to monsoon water. This is the reason their wedding spot was covered with waterproof sheets. A close friend of Miheeka Bajaj took the responsibility to see that their wedding ceremony is not disturbed. She said, “Miheeka and her mother are event planners themselves so they have been extremely thorough in the preps. They have made sure the entire wedding venue has turned water-proof so that even if it rains, it will not affect the festivities in any way.”

While interacting with the news portal earlier, Rana Daggubati spoke about his ladylove and claimed, “Getting married to Miheeka is the best time of my life”. He is 35 years old and admitted that it is just the perfect time to get married. Rana lives 3 kilometres away from his ladylove house. He admitted that sometimes things are so smooth and we never know that life is taking us in a correct direction. Rana Daggubati says, “She’s lovely, and we make a great pair. We draw positive energy from one another. I am getting married on August 8. On the personal front, it’s been the best time of my life, getting married to Miheeka. It’s been pretty awesome.”

For one of the pre-wedding ceremonies, Miheeka Bajaj proudly wore a shimmering red and grey lehenga that belonged to her mother. Her mother Bunty Bajaj had won the same lehenga on her wedding day. Her mother shared on Instagram, “Baht function wearing my wedding outfit, could not stop crying my baby is all grown up,”

Do you know Miheeka Baja wedding lehenga took 10,000-man-hours to design it

Rana Daggubati wife Miheeka Bajaj wedding lehenga was designed by none other than Anamika Khanna. She revealed that it took no less than 10,000-man-hours to design Miheeka’s wedding lehenga. The lehenga has hand-made zardosi designs with chikankari combined with gold metalwork. Anamika Khanna reported that Miheeka and Bunty Bajaj have a very subtle and fine taste which is why they wanted wedding lehenga to be elegant. The lehenga was paired with golden woven dupatta which added to the wedding attire elegancy.