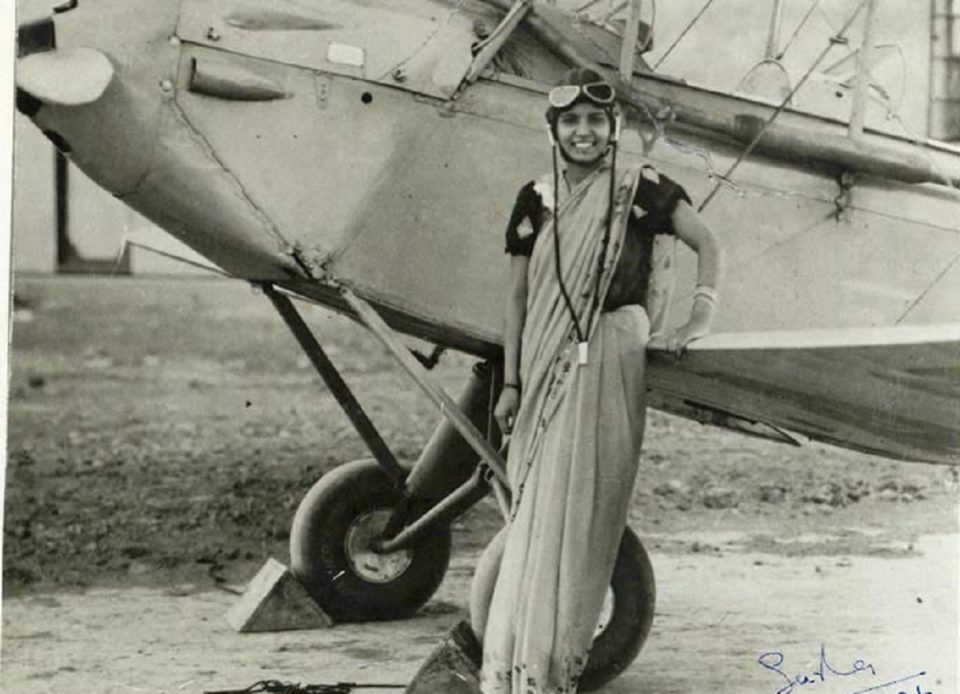 Sarla Thukral was born in Delhi in 1914, when India was still a part of the British Raj. Although very little has been written about Thukral’s early life before marriage, she was known to be a traditional Indian woman just like other women in the early 20th century. Sarla Thukral’s life took a turn post-marriage with P.D. Shwarma. After marriage, she started living with her husband’s family in the city of Lahore which was then one of the northwestern parts of the Indian subcontinent. Her husband was a pilot and along with his other family members. He was the first airmail pilot in India who mainly flew from Lahore to Karachi. Although Sarla Thukral was not ambitious since childhood, she got the distinction of being the first woman pilot in India.

What encouraged Sarla Thukral to become a pilot?

Sarla Thukral got married at an age of sixteen to a family of pilots. She was highly encouraged by her husband and father-in-law to fly like them. After getting trained for 1000 hours, Sarla Thukral got an ‘A’ rating. Sadly, Sarla’s husband died soon after and World War II was at its peak. Henceforth, she could not earn herself a commercial pilot license. She enrolled herself in fine arts college in Lahore and became a clothing and jeweller designer. She was a great artist and worked on many projects till her nineties.

After marrying Captain Shwarma, Sarla Thukral became Sarla Shwarma and gave birth to a daughter within the first year of their marriage. Her interest in piloting slowly grew since her family was full of pilots. Since her husband was too busy to complete his fly assignments, her father-in-law sent Sarla Thukral to the local flying school where she learnt to fly. Captain Shwarma always believed that his wife was a natural pilot. Although she used to wear a sari, she looked amazing in the cockpit with her instructor in the Gypsy Moth biplane.

After getting trained for eight hours and ten minutes, her instructor’s believed that she could fly solo. In aviation, the first solo means taking back and front along with landing alone in the plane. This was a critical task and her husband was not with her at that time. So, she asked her instructors to wait for his return. When Captain Shwarma arrived home, Sarla Thukral successfully flew the Gypsy Moth solo and returned safely. She passed her test with flying colours. After 1000 hours of training more, and taking care of her children and husband in between, Sarla Thukral received an ‘A’ certificate in 1936 when she was 21 years old.

In a tragic event, Captain Shwarma lost his life in an aeroplane crash in 1939. After a period of mourning, she planned to move on and travelled to Jodhpur to get her commercial pilot’s license. Since she loved flying, she wanted to take aviation her career. However, all the civilian flying was suspended at that time and her dreams of getting a license were shattered. The riots against British Raj was all over the country and Great Britain was entering into a war with Germany due to the second World War.

Sarla Thukral was a talented woman and her skills were not limited to flying only. She returned to Lahore and got herself enrolled in Mayo School of Art to achieve a diploma in fine arts. After completing her course, she became a specialist in Bengali painting style and was able to make exquisite paintings of Bengali women in elegant dresses. She started a business and sold costume jewellery to Indian women. While raising her only daughter, she became popular. She began decorating long stretches of silk fabric that were used as sarees.

Sarla Thukral returns to India after the 1947 partition

The independence movement in India brought both opportunities as well as chaos in 1947. Muslim population demanded an individual nation and thus, India and Britain agreed in parting India and Pakistan. Since Sarla Thukral stayed in Lahore that turned out to be a Pakistan’s city after the partition, she knew that she had to flee to India to grow her business. Her neighbours warned her about the growing violence in the country and hence, Sarla packed her things, took her daughter and went to Delhi. Fortunately, her trip was smooth even after communal violence prevailed all over the border regions.

Sarla Thukral as an entrepreneur

After Sarla Thukral arrived in Delhi, she reestablished her clothes and jewellery business. Her work became popular in the independent society. One of her customers was Vijaya Lakshmi Pandit, sister of PM Nehru and a diplomat. She remarried in Delhi to P.P Thukral and lived happily ever after. Her clothing and jewellery business flourished for many years. When her husband died, she rented rooms in her big house. She enjoyed writing shlokas from Vedas in her spare time for her friends. In her 90s, Sarla Thukral was happy to teach her skills to the others. On 15th March 2008, Sarla Thukral died at the age of 94.