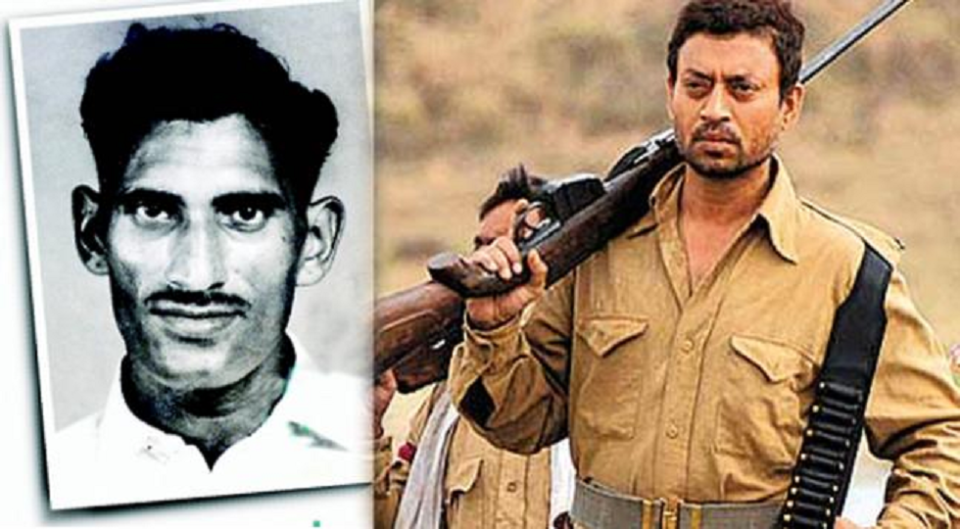 Although Bollywood has received many criticisms recently for showing nepotism and biases regarding star casts, we must not overlook the fact that Bollywood has provided us with some very important movies too which are rich in content and prove inspirational for many of us. Indian cinemas are luckily blessed with some very talented and motivational filmmakers who consider making films of real-life events. Moreover, they had done great justice to the story background by giving importance to the true incidents or about great personalities.

Let us have a look at 25 best movies based on true stories or biopics of famous personalities.

This movie based on theft and robbery and was inspired by a robbery case in 1987 in which a gang posited themselves as members of the Central Bureau of Investigation (CBI) officers. They raided many wealthy shops including one jewellery brand situated in Maharashtra. The movie is one of the best movies based on true stories and is directed by Neeraj Pandey. The lead actors of the movie include Akshay Kumar, Anupam Kher, Manoj Bhajpayee and Kajal Agarwal.

2. No One Killed Jessica

No one killed Jessica is yet another strong movie in Indian cinema that is based on true events. The movie stars Rani Mukherjee and Vidya Balan. The story plot has been dedicated to a controversial murder mystery of Jessica Lal which followed a public outrage. Even the media took an active part in covering the mystery behind the murder and the killer’s sentence. The director of the movie is none other than Rajkumar Gupta and the movie won many awards and appreciations.

This Akshay Kumar starrer movie needs no introduction as the movie got critical appreciation from the masses due to the outstanding performance made by the star cast, revealing trouble faced by people during the war-like situation. The story is based on the incident when Indians residing in Kuwait were evacuated by the Indian government during the Iran-Iraq war. When Saddam Hussain invaded the country, Akshay Kumar, who played the role Ranjit a businessman helps many Indians while they try to return to their home country i.e. India.

This movie is a biopic of Dashrath Manjhi who is popularly called as the mountain man of India. The role of Manjhi has been played by a versatile actor Nawazuddin Siddiqui. Manjhi is poor labour who resides in a small village in Bihar. Due to a tragic event, he had to carve a path that is approx. 9.1 metres wide and around 110 metres long. Manjhi carves the entire lane with the help of his chisel and hammer. This critically acclaimed movie was directed by Ketan Mehta.

Talvar is one of the movies based on true stories of 2008 Noida double murder crime. The movie stars Irfan Khan, Neeraj Kabi and Konkana Sen Sharma. Talvar revolves around a teenage girl’s murder along with a family-based servant followed by an investigation. The investigation is made from diversified perspectives, suspecting the girl’s parents even to find whether they are guilty or not.

This movie is also starred by Irfan Khan and depicts the real story of an athlete of a similar name. Irfan is an Indian army soldier and wins gold at the National Games. In his later life, he joins some mysterious bandits. The director of the movie is Tigmanshu Dhulia. Paan Singh Tomar won national awards for best actor along with being the best movie of the year. 3

This biographical movie has been directed by Hansal Mehta. Shahid is dedicated to a life history of a lawyer and a human rights activist named Shahid Azmi. He was assassinated in Mumbai in the year 2010. The lead role in this movie based on a true story is played by Rajkumar Rao.

The role of Neerja in the movie has been played by Sonam Kapoor and is directed by Ram Madhavan. The storyline of the movie revolves around the incident when a Pan Am Flight 73 was hijacked in Karachi, Pakistan. The actual date when the incident took place was 5th November 1987 in which around 20 passengers were killed along with Neerja Bhanot, the head purser.

This movie has been directed by an actor Nandita Das who started her debutant as a director with this movie based on a true story. The movie is based on the aftermath of Gujarat’s riots in 2002. The lead actors of the movie include Paresh Rawal, Naseeruddin Shah, Shashna Goswami and Deepti Nawal among various others.

Swades is regarded as one of the best movies of Shahrukh Khan and is inspired by the true story of Ravi Kuchimanchi and Aravinda Pillalamarri. The couple is NRI’s who come back to India and develop a power generator that can be operated by the villagers themselves. The power pedalled generator helped the villagers and its schools by providing much need of electricity and light.

This is one of the movies based on true stories and is directed by Shekhar Kapoor. The story is based on the life history of a bandit who later became a member of Parliament. Her name being Phoolan Devi is responsible for several crimes after she led a poor and miserable life full of injustice and abuse. The lead role i.e. the character of Phoolan Devi is played by Seema Biswas.

Raazi is a story of a real-life spy Sehmat Khan who is an Indian spy agent. The lead role is played by Alia Bhatt who is a dutiful and a very obedient daughter of a patriotic Indian spy agent. Alia gets married to a Pakistani officer in the year 1971 to gather crucial information regarding Indo-Pak war.

Gold is a movie directed by Reema Kagti and starred by Akshay Kumar. The storyline of the movie is about India’s first gold medal during the Olympics. The movie depicts the golden era where India dreams about winning a gold medal in its National sports Hockey. A young representative Tapan das takes the responsibility to ensure that India wins the gold medal as an independent nation.

This movie is based on a real-life story of Sandeep Singh who is the former captain of Indian Hockey Team. Sandeep becomes paralysed and is unable to paly for his country but after two years of hard work and dedication, he can stand on his feet and paves way for 2008 international hockey tournament. The lead roles in the movie are played by Diljeet Dosanjh and Tapasee Pannu.

Mulk is yet another movie lead by Tapasee Pannu and Rishi Kapoor. The story is based on true events about how people claim what is rightfully theirs. The story is based on a Muslim joint family fighting for their dignity and honour where one of the members takes to terrorism. The main theme on the movie portrays the harsh reality of the present state in India where religious intolerance grows each day and to show that not every Muslim is a terrorist yet they are been humiliated by the society.

Paltan is a movie based on war incidents that took place in real life. This movie is directed by none other than the director of the movie Border, JP Dutta. The incident covered in the movie is 1962’s Sino-India was.

This multi-starer movie is one of the biggest hits in 2019 and ensembles stars including Akshay Kumar, Vidya Balan, Sharman Joshi, Kirti Kulkarni, Tapasee Pannu and Sonakshi Sinha among many others. The story is based on Indian mission to land on Mangal i.e. mars planet where ISRO becomes the first-ever organization to achieve success on the first go.

This movie was released in the year 2016 and is based on a real-life history of Sarabjit Singh. He was sentenced to death by Pakistani Supreme Court in 1991 to spy and lead terrorism. The role of Sarabjit is played by Randeep Hooda and Aishwarya Rai plays the role of her sister who keeps trying for years to make her brother prove non-guilty.

Released in the year 2018, Sanju is a movie based on the true story of Sanjay Dutt’s life. This biographical film was directed by Rajkumar Hirani and written by Abhijat Joshi and Hirani himself. As the name says, the movie depicts some real-life incidents of Sanjay Dutt and how he got addicted to drugs, got arrested due to false allegations in 1993 Bombay’s bomb blast case. The story reveals very beautiful chemistry between a son and his father and how Sanjay’s father supported his son to streamline him again in the Bollywood industry. The role of Sanjay Dutt is played by Ranbir Kapoor and Paresh Rawal is his father. Other actors included in the film are Vicky Kaushal, Anushka Sharma, Diya Mirza, Manisha Koirala and Sonam Kapoor.

Kesari is a historic movie and based on the battle of Saragarhi. The battle was fought between 10,000 Afridi’s, Orakzai Pashtun tribesman and 21 Sikh soldiers who fought a battle in 1897. This battle is remembered as one of the bravest battles ever fought in military history.

The movie starring John Abraham is based on an Operation named Batla House that occurred on 19th September 2008. The encounter was made by Delhi Police against the Mujahidin terrorists. But the incident turned out to be very controversial because the police were accused of enabling a fake encounter.

This movie is based on the real-life story of Milkha Singh, also known as the Flying Sikh of India. The film is directed by Rakesh Omprakash Mehra and the script is written by Prasoon Joshi. As the name says, this movie is based on the story behind how Milkha Singh achieved the title of Flying Sikh and his journey from a soldier to a successful runner representing India in Olympics and international tournaments. The lead role is played by Farhan Akhtar and the sports was coordinated with the help of an American action director named Rob Miller belonging to Reel-Sports.

Released in the year 2018, Padman is the story of a social activist and a social entrepreneur Arunachalam Muruganatham living in Tamil Nadu. The movie received many appreciations and awards for bringing in front a common issue faced by almost every Indian woman. The film is directed and written by R. Balki and starred by Akshay Kumar, Radhika Apte and Sonam Kapoor.

This is yet another biographical movie directed by Omung Kumar. The story of the movie is based on Mary Kom’s life and her journey to becoming a world champion boxer. Priyanka Chopra plays the lead role in the film who reveals ups and downs faced by Mary and how she managed her personal life and career inspiringly while making India win several gold and silver in boxing sports.