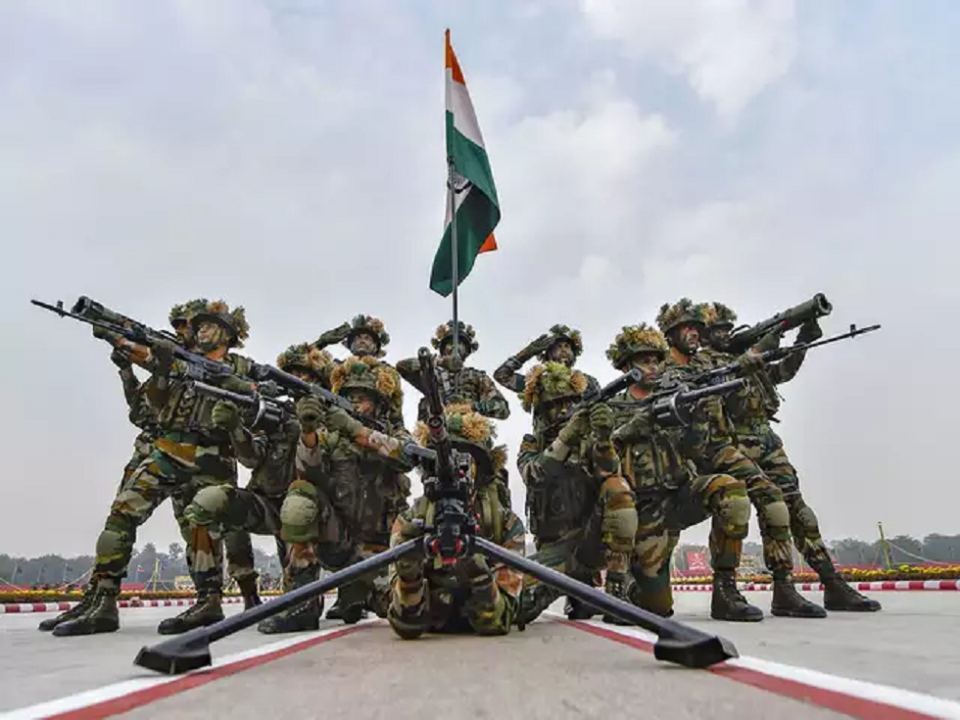 As we all know, the Government of India is solely responsible for managing Indian defence systems and to protect every part of India thereof. The Primary command of Indian Armed forces is held directly by President of India and the responsibility regarding defence is looked upon by Cabinet Ministers. In general, the Indian defence system comprises of three divisions: Indian Air Force, Indian Navy and Indian Army.

Since past many years, India has witnessed many ups and downs along with the coercive concentration of several empires to have control over Indian military and state governance. However, as the time rolled by and societal norms and ethos became more grounded on systematic approaches and appropriate powers, the Indian Army retained its powerful position amidst chaotic and abrupt disruptions due to foreign interventions.

As we know today that Indian Armed forces became fully functional after it got independence from British Colonialism, the main headquarters of Indian Army has been placed in the capital city of India, New Delhi. Let us have a look at six most powerful weapons owned by the Indian Army with the help of which they can combat war and intensified situations successfully.

Prahaar is one of the giant missiles and a powerful weapon owned by the Indian Army. The missile is around 7.3 metres in length, 0.42 metres in diameter and weighs 1,280 kg. Prahaar can carry a payload weighing 200 kg with a planned nuclear, submunition and HE options. The missile can travel more than 150 km and is driven through a single solid-propellant engine. The vehicle which carries Prahaar is named as TATRA Transporter-Erector-Launcher which can carry six missiles in each truck. The Prahaar missile needs to be launched vertically and can be launched in salvo mode which means multiple azimuth attacks. It is said that the missile can reload very quickly and hence is called ‘ripple firing mode’.

Although India is working for Agni VI which is the advanced version of Agni V missile, the Agni V itself is capable enough to wipe out a city in one round. The missile is a three-staged combat machine which is 17 metres in height and 2 metres wide. Agni V can carry 1.5 tonnes of nuclear armoury and the latest model launched recently is said to be more advanced in terms of engine, warhead and navigation. With the inclusion of Agni V, Indian Armed forces have joined the club of powerful countries having powerful weapons such as France, US, Britain and Russia that has intercontinental ballistic missiles.

The missile can be programmed in a way that after reaching its peak trajectory, it can come back to earth and continue towards its journey i.e. towards the target with increased speed. The missile includes computer programming and navigation systems which is the reason it can be handled by the army from distant places and without entering the battlefield themselves. The indigenous design of the missile is developed and can maintain the inside temperature more than 50 degrees Celsius.

The T-90 Bhishma tanks weigh around 48 tons and are able to fire the Invar anti-tank missile with the barrel held by it. One remarkable feature of this powerful weapon owned by Indian Army is that even though the tank has a machine gun with 12.7 mm power that has been mounted in the turret to be operated manually, it can be controlled remotely while sitting inside the tank turret by the commander operating the tank. To move from one place to the other, the tank is powered by a diesel engine that makes easier for the army to maintain it besides reducing fuel costs as compared to gas turbines used for T-80s. According to the sources, Indian T-90s are downgraded version of Russian T-90A, however, India have replaced few of its parts with the help of Israeli, Swedish and French subsystems to make it better than Russian T-90A.

The INS Vikramaditya is a refurbished aircraft owned by Indian Navy and is equipped with 234 hull sections that are made of steel weighing some 2,500 tons. The length of this warship is 284 metres and has a beam of 60 metres. The height of the ship is around 60 metres and has a displacement capacity of 44,500 tons.

You will be amazed to know that this powerful warship owned by Indian Army/Navy has 22 decks with 2,500 compartments. Out of them, around 1,750 compartments have been rebuilt completely and can carry more than 1,600 personnel’s and the crew. This ship has been modernised by installing a flight deck lighting system, 14-degree sky jump, refrigeration, AC plants, three restraining gears, 30m wide arrester gears, and two reverse osmosis plants that can produce some 400 tons of drinkable water every day.

The warship is equipped with latest ammunitions and surveillance radars along with electronic warfare suites that make Vikramaditya one of the most powerful warships in India. Along with inhouse missiles and close-combat riffles, the aircraft has DAPS and LUNA landing systems and Sea Harriers Jet fighters. The entire system is controlled and aided with computerised systems with the help of an organization and is named as LESORUB-E. The systems collect data from its sensors and processes with computer-aided devices to provide the ship with combat control and direction related assistance.

Brahmos is undoubtedly one of the most popular weapons owned by the Indian Army. It can be said that the Brahmos missile is the result of a joint venture made between Russia and India to modify the Yakhont missile.  This missile is 9 metres lengthwise and weighs around 3 tons. The missile is currently operated by the 3 regiments of the Indian Army and the Air Force is conducting trials to launch other variants. The developed air-launched variant has reduced the missile weight and made it 2.5 tons in weight where one missile can be carried with the Su-30Mki. At present, the Indian defence systems have the capability to produce 100 Brahmos missiles every year.

Technically, this powerful weapon owned by the Indian Army can be guided towards a planned target including both land and sea. It has the ability to travel with a speed 2.8 times more than that of a sound or a noise. This is the reason Brahmos is categorised under supersonic missiles category. The new version of Brahmos is under development and will be able to fly at a speed more than that of Mach 5. This missile will not only decrease the reaction time taken by the enemy in the war front but with the help of higher speed, it can reduce the chances of the missile being intercepted.

This is one of the most advanced aircraft owned by the Indian Air Force and contains every feature that needs to be present in the 21st-century warcraft. The SU-30MKI is a long-range, super-manoeuvrable 4.5+ gen fighter with a multi-tasking feature that is built as per Indian Army specifications.  The baseline of the aircraft is imported from Russia and has been modified by French, India and Israeli avionics which is the reason Su-30 has several variants for Indian Air forces.  When it was added to the Indian Air Force, the original SU-30 was renamed as SU-30MKI in which ‘I’ stand for India.

When the Indian Army realised that the SU-30MKI has the capability to combat its enemies potentially, and is a versatile fighter plane, the IAF gave an order of 272 new aircraft that made India one of the largest SU-30 operators worldwide. One remarkable feature of SU-30MKI is that it can multi-task while fighting which means it can potentially conduct air to air along with air to ground strikes combinedly. This aircraft is used exclusively by Indian Air Forces and the IAF in India currently have more than 200 SU-30 jet fighters. The top speed recorded by this aircraft is similar to Mach 2 i.e. 2,120 kmph and little less than Mirage’s Mach 2.5 which is 2,336. The aircraft is equipped with missiles, bombs, radars and rockets which makes it one of the most powerful weapons owned by Indian Army.

Athi Varadar Darshan: All you need to know about Athi Varadhar festival and Remarkable Facts behind Once-in-a-Lifetime event