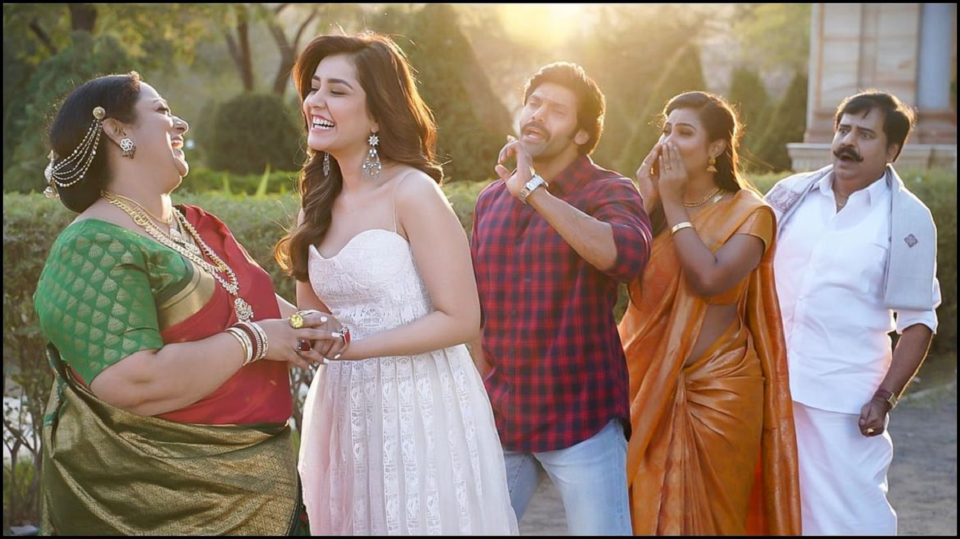 Aranmanai 3 is another film that has been released in the usual template with a bit of Comedy -Bungalow – Ghost – Flashback – Climax. Without scaring and making enough effort, without convincing the audience with the story, the writer and director Sundar C seems to be unmistakable in every scene.  The palace would have been terrified if he had moved away from the ‘this is enough’ mentality and focused on the story and screenplay.

But here’s the catch – despite this movie being called ‘the dumbest film of the year yet’ by Indian Express, Aranmanai 3 was a surprise hit at the box-office earning more than Rs 15 crore in the first four days of its release.

Despite the commercial value, most fans found nothing new in this story. Let’s explore what went wrong.

Aranmanai 3 Movie Review: Why Did It Suck?

Critics gave 0.5 to 1.5 out of 5 stars and said “No ghost, spirit or specter doomed to haunt the same house for eternity has felt more trapped than I did in the theater today. Even an end credit song by Arivu couldn’t keep me from fleeing for the exit the second the lights came on. Avoid Aranmanai 3 with the same dedication that Sundar C shows in evading at arriving at a conclusion in this film.”

Zamindar Rajasekhar lives in the palace with his sisters and relatives. There is also a ghost that lives here and plays with a young Jyothi, his daughter.

Rajasekhar, who is a landlord, goes to preside over a wedding. He falls in love with the beauty of the bride Eeshwari and marries her. They have a baby girl. Eeshwari  dies when the baby is born. That child is Raashi Khanna who played the role of Jyoti.

Rajasekhar has no affection for his daughter Jyoti after losing his wife Eeshwari. Jyothi, who has reached the age for schooling stays in a hostel not her home claiming that there is a ghost in her palace. Despite running away, she returns to the palace after completing her studies.

Meanwhile, Saravanan, an electrician, Jyothi’s love interest  played by the actor Arya comes to see the electrical work in the palace. Zamindar’s cousin who is played by Sundar C also comes and joins, and the screenplay is in full swing. Knowing that there is supernatural power in the palace, they also discover that there are two demons.

Zamindar’s car driver (without any real explanation) kills himself. Next he prepares to kill the Zamindar’s daughter as well. Sundar C who plays the role of Ravi enters the palace at this moment and discovers that it is not demons but ghosts who live there. He digs up the antecedents of the demons and tries to drive them away. Whether this exorcism operation was a success remains to be seen.

The ‘template’ story is as glamorous and humorous as Sundar C’s previous two Aranmanai films. This time they filmed the movie in a real, magnificent palace without being a production set. In addition the quality of the visual effects is intimidating, especially the CGI made using black pigment are repetitive and terrifying.

But Aranmanai 3’s Screenplay Could Have Been More:

The ‘flashback to ghosts’ story is supposed to be a strong feature in ghost films. But the movie needs more.

Coming in the flashback, Eeshwari does well in the role given to her. But the fact that the character’s purpose and its nostalgia are not fulfilled does not do enough justice to the screenplay.

Development of characters also could have happened such as Baby Ovi Bhandarkar as the little girl who plays with the ghost. The film crew also failed to take advantage of comedians like Manopala, Yogibabu and Mynavathi.

Despite this, Senthilkumar’s camera captures the interior of the majestic palace, as well as the forest, the mountain temple and the cave temple.

The performance of the first two films were better as Aranmanai 3 did not impress as much as it did in terms of ‘content’.

The problem is that in a horror comedy film the horror and comedy stand out piece by piece. The big downside is that there aren’t as many fun moments for adults as there are comedies that kids can enjoy.

Jyothi who was threatened by a vengeful spirit will face two more, and then get married. Obviously, this hints at a sequel.

Jathi Ratnalu: An Honest Review With A Message

How to Take Online Casino Gaming to the Next Level